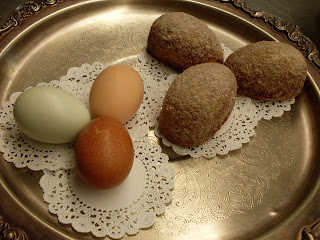 These are dark days for bakeries.  The price of flour has doubled, eggs almost as much.  Fuel surcharges are added to every delivery invoice.  If bakers lived in an economic vacuum, we could crank up the prices based on our increased overhead.  But everyone's caught up in this fiscal sadness, aren't they?  Just ask the chickens.
"Either I've gotten freakishly strong or there's something wonky with these eggs."
What the hell???  I reached down into the case of 30 some dozen eggs.  Grabbed about four in each hand and brought them to my station.  Felt something really nasty seeping through my apron.  Noticed that every egg was mangled and oozing.
Maybe I was a little distracted and put just a smidge more pressure on my oval charges than I might normally.  I tried again, very gently.  Got them to my workstation and started cracking.  But they weren't breaking cleanly.  The shells shattered.  Egg everywhere.  When I actually got an egg into my mixing bowl, little bits of shell tagged along.  I was stuck playing catch with the little buggers, chasing the runaways around the bowl with a larger piece of shell.
I asked Scott, the guy who delivers our eggs and butter, "What the hell is going on with the eggs?  What are they doing to these poor chickens that they're laying brittle eggs?"
A few days later with our next delivery, Scott's got an answer.  "Ethanol.  They can't get or afford decent feed, the crops are all going to ethanol production."
And that was it.  No more eggs from mass producers.  I can sympathize with their plight, running a business and making ends meet.  But the paper thin shells those little chickens were squeezing out weren't a good sign.  I didn't care that the price of mass-produced was already too high and going free-range and small scale was going to double that. There's so little control I have over the ingredients I use, except this.  I'm in Vermont, dammit.  A small farm every few blocks.  I dodge chickens driving to my shop.  It took my husband less than a day to find a small local farm that could supply me.
We pay more.  But we pay a local producer who's suffering from the same economy.  And we can visit the animals that do the grunt work and know they're treated well.  And the eggs.  Oh the eggs.  The shells are sturdy and multi colored. And the yolks are bright orange.  There's a little sticker on each recycled egg carton where the lay date's recorded.  I boil a couple off the second we get them in, the little date on the carton says they were just laid!  It would be criminal not eat a few.
Small producers who allow their flock to range freely cut down on the amount of supplemental feed needed to support their birds.  Since the critters are getting nutrients from the seeds, bugs and grass they nosh on as they stretch their legs, they can manage when the available feed gets a little sketchy.  That's working on the assumption that by free-range, it means the chickens are outside the better part of the day foraging.  But free-range producers aren't currently bound by any legal standards.  If coops are a few inches larger than conventional coops or if there's a window in the coop, presumably you can call the eggs free-range.  So you never really know unless you REALLY know.  That's damn frustrating.
If you buy the normal old white commercial egg, you've probably noticed the brittle shells.  Now you know why.  So if you can afford it and you have access, pick up a dozen free-range eggs from a local farm or your farmer's market.  You're supporting the local economy and making a chicken happy.
Then go home and making something beautiful with them.
Labels: ingredients