My Magic Kingdom for a Sticky Bun

A few years ago, my cousin Barbara took her family to Disney Land.  Her husband Hermann and her seven-year-old son Maxi.  They'd been making a small tour of the eastern U.S.  They stopped by D.C. where they visited our transplanted German aunt Erika.  They spent a few days catching the sights in New York.  And they ended it all at the happiest place on earth.
That winter, I went to visit them in Germany.  We sat around the dining table, lingering over wine and a little cheese.
Maxi asked,' Hey, you wanna see our pictures from Disney Land?"
I didn't.
I grew up in America.  Cinderella's castle, steamy asphalt, heat stroked teenagers stuffed into plush costumes.  I've seen it.
"Yeah.  Why not."  I'm polite. And the kid wanted an excuse to stay up a while longer.
I'll hand it to them; the composition of the shots was unusual.  Instead of Maxi standing front and center with the sights framed behind him, he was always standing off in the great beyond.  Grinning like a maniac.  Hmmm.  Strange what they wasted their camera's memory on.
Hey there, hi there, hoe there!  After the fifth nearly identical photo of Maxi in the nether-distance near no discernable site of note, I saw what they saw.  The spectacle they felt compelled to record.  Fat people.  Not just fat people but Grade A American ground round fat people.  Monumental asses.  Cathedral sized guts.  They'd come to the magic kingdom and spent their day documenting America's tragic gelatinous descent into grotesque obesity.  And to dress it all up with a bow, every last wobbling family wore matching t-shirts.
I've been accused of aiding and abetting in our nation's crash weight gain diet.  I'm a baker.  I spin out croissant bathed in butter.  Cakes awash in whipped heavy cream.  Delicate mouses just dirty with pounds of chocolate.  But here's the deal.  I'm not fat.  No one who works for me is fat.  And my customers, they aren't fat.  Not even close.  OK, a few.  But I'm not taking credit.  We live in Ben & Jerry's country.  I'll shift the blame to them.  And sure, some things get away from us and wander into "super size" territory. Sticky buns for one.  No matter what we do, they always come out the size of banquet plates.  But hey, sticky buns are originally a German immigrant creation.  I blame the old world for that one. 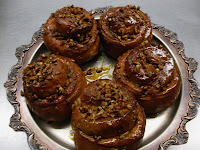 And cakes.  I can't figure out why, when you put me in charge of three layers of cake, filling and an outer layer of buttercream, I end up with a behemoth.  Every damn time.
But, on the whole, I don't feel responsible for America's morbid obesity.  As a matter of fact, I believe that small shops like mine, where we use local ingredients and bake in small, thoughtful batches, are the key to getting us back on track.  I'm not offering anything artificial or potentially radioactive, like the stuff that allows industrial, shrink-wrapped piles of sucrose to loiter on grocery shelves for millennia.  What we do is so personal, to everyone who walks in the shop, that there's no disconnect between the pastry and the person.  I refuse to look at my work, at my confections, as products, units to be pumped out with increasing rapidity and economy.  That's the stuff that's making us fat, the value sacks of partially hydrogenated evil.
My German family, they eat pastries most every day.  They stop by their local confectioner mid-afternoon 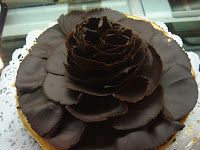 or they bake a tart, brew a fresh pot of coffee and sit down at 3pm to relax and indulge just a little.  It's not that they've forgone treats for the sake of svelte; they just buy and enjoy their treats thoughtfully.  That's what I see here, at our shop. One of our regulars, Claude, gets a scone every day.  He's lost 50 pounds since we opened.  I've noticed the same kind of conscious consumption at the dwindling small pastry shops around the states.  Instead of thoughtlessly devouring the entire contents of that economy sized Acme brand bag of cookies, the experience of choosing something from a pastry case and knowing that the little tart you're going to take home was baked today and just a few steps from where you stand makes you savor that small treat.
So if you want something tasty, go to your local baker.  Even better, bake something yourself.
Just don't eat it all in one sitting.