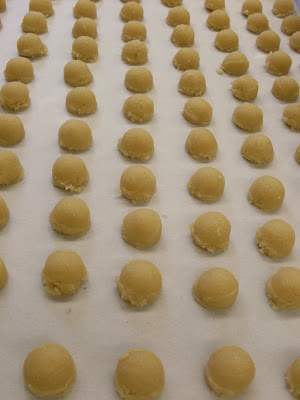 Why Macaroons?  They got me started, built a business, drove us to buy a 19th century general store and convert it into a pastry shop on the edge of a flood prone river.  How does such a small cookie have so much power?  Compelling a grown woman, with degrees from university and law school, holding down a great job in Hollywood doing Hollywood stuff, how does an almond cookie inveigle such a person to move across the country to the northern most reaches of the United States, to a pin prick of a town called Montpelier but known as Montpeculiar to the natives?  The answer lies more in why I felt compelled to make them then how good they are.  And they are very very good.
I missed my mom.
She died too soon.  But anyone we love never dies at the right time.  She adored  marzipan and it's cousin, the Mandelhoernchen.  Mandelhoernchen are the pastry equivalent of a baked pound of almond paste but with a few added textural components.  A crisp outer skin, browned in the oven and covered with toasted sliced almonds but still dense, moist and fragrantly almond inside.  It's shaped into a little horn, the ends usually but not always dipped in dark chocolate.

I scoured for recipes.  Among the millions of things that suck about someone you love dying, is not being able to ask them how they made something.  Or where they hid a recipe.   I couldn't find mandelhoernchen but I kept coming across macaron.  The original macaroon, with almond.  No coconut.  Invented by Italian monks and later adopted by French nuns who baked the confections for pocket money while they were on the run during the French revolution.  It had the general ingredients of a mandelhoernchen, it was linked to divinity and it had the power to save people from the guillotine.  Who am I not to try it?
It was mighty tasty.  I worked on the recipe until it was über-tasty.  It's not as showy as the shiny chocolate dipped horn, it's pretty much the Ethel Merman of pastry.  Doesn't look like much but damn it's good.
Years later, I'm an established pastry chef.  I'm looking through some old pastry tomes.  Randomly flipping through pages.  Rezept für Mandelhoernchen.  I wasn't even looking for it anymore but there it was.  And now I'm giving it to you.  So keep it safe for me  and share it with people you love.  If I lose it, I know where to look to get it back.
Mandelhoernchen
1 pound almond paste
4 ounces granulated sugar
3 egg whites
AP flour
8 ounces sliced almonds
simple syrup (microwave 1 cup of water with 1 cup of sugar until the sugar is completely dissolved).
1.  Combine almond paste and sugar in a mixing bowl using paddle attachment.  Slowly add eggs whites, making sure there aren't any lumps.  An alternative is to mix the paste and sugar in a food processor with a blade attachment and add egg whites while it's running.
2.  Sprinkle flour on a clean surface and rub some on your hands to make sure the almond paste doesn't stick to you. Divide the paste into 2 pieces and roll each into a log about 15 inches long on your floured surface.  Use only enough flour to keep the paste from sticking to the table.  Cut the log into 13 pieces.
3.  Place the almonds on a sheet of baking paper.  Roll each of the dough pieces in the almonds, making sure they stay shaped as little logs.  And make sure the almonds stick all around.  Keep rolling the logs until they are about 5 inches long.
4.  Bend the pieces into horseshoe shapes and place on a sheet pan lined with parchment paper.  Allow them to dry at room temperature for 3 hours.
5.  Bake at 375 for 15 minutes or golden brown.  Brush with the simple syrup the second they come out of the oven.  Dip the end in melted chocolate after they've cooled.
Labels: recipe