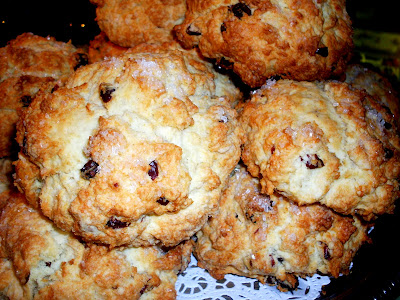 (pile o' scones)
"Dear Mistress Master Baker:
I have a family recipe for guava cake that calls for self-rising flour but sometimes that is hard to find in my small rural town.  Can you tell me what I should add per cup of flour to recreate the self-rising mix?
Thanks!
Self-Self-Rising in Morrisville"
A baker in Bristol, England named Henry Jones invented self-rising flour in 1845.  It was such a hit that the Royal Navy switched to his flour, replacing the sailor's usual fare of hard biscuits to a lighter and fluffier version.  Poor bastards. Stuck at sea with a bunch of smelly men and rats, eating rock hard biscuits.  I'd sue for emotional distress.
Flour of the self-rising variety is just all-purpose flour with added leavening and a bit of salt.  The exact ratios differ depending on whom you're asking.  Some say 1 teaspoon of baking powder per cup of flour.  Others say up to 1 1/2 teaspoons per cup.  But they all add a pinch of salt for each cup of flour.  At least there's some consistency.  And Mr. Jones has taken his exact ratios to the grave long ago, so we'll have to experiment.
I'd split the difference and start with 1 1/4 teaspoon per cup for your recipe.  I'm guessing that the guava paste you use is heavy, so a little extra umph can't hurt.
Enjoy!  And while you're adding the leavening and salt to your flour, think of those poor smelly sailors eating petrified biscuits and thank the heavens for Mr. Jones.
Labels: reader quandry self-rising flour