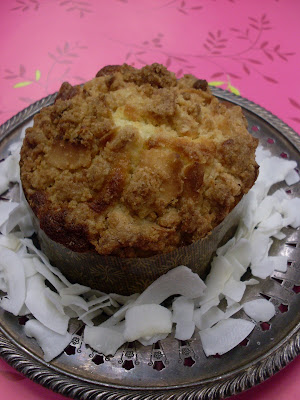 I spent a good quarter of my childhood alone at the kitchen table, unmasticated bits of soggy food lodged in my cheek; forbidden to leave until I finished the unpalatable pile of nutrients on my plate. So I sat, my tush numb, for hours on end despising mealtime and hoping for a break in my mother’s watch so I could sprint to the backyard with my dreaded tempeh patty and fling it over the neighbor’s fence.

Aside from sweets and bright orange processed simulated cheese bits, there was very little I tolerated as a kid. I amassed a compendium of inedibles, morsels that I refused to chew. My mother’s health gruel, of course, on the top of the list. But others as well, Swiss cheese, mushrooms and coconut. Especially coconut.

Opening a bakery, you’re faced with requests that can offend your culinary sensibilities. It took months to talk me down after we fielded repeated orders for German chocolate cake. The assumption, well meaning to be sure, was that since I was German, I made German chocolate cake.  This led to bouts of insanity and mouth foaming rants.  “It’s NOT GERMAN!  FOR THE LOVE OF GOD, IT'S FROM TEXAS!  AND IT CONTAINS COCONUT!!!!!"

I got over it, though. I don’t mind in the least making German chocolate cake anymore. I even make German chocolate cheesecake for kicks. Because people like it and I am perfectly willing to face the fact that I can be an irrationally intolerant ninny when it comes to food. Hey, if I’m a decent baker, I should be able to make German chocolate cake tasty and elegant. Whether it’s actually German or not. And this realization, that ingredients and recipes that I’d once shunned due to my own prejudices and stunted taste buds could be flavorful and transcendent, has led me to embrace coconut openly and proudly.

So I would like to share with you a little crumb cake packed with that sweet white tropical essence. And even if you hate coconut, you might want to give it a try. You may surprise yourself.

Fill cupcake cups half full with batter and distribute crumbs evenly over the top of the batter. I like to cover the batter entirely with a nice coating of buttery crumbs but then I’m crazy that way.

Bake for 20 minutes to a half hour, or until the crumbs are brown but not burnt and when you poke the top, the cake bounces back. In this instance, it might not be a bad idea to take a tooth pick to the cake to make sure it’s done.
Labels: Coconut Pineapple Crumbcake Recipe