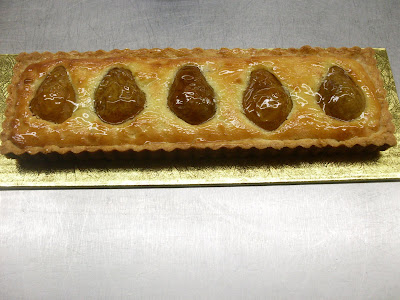 I have a love hate relationship with the order calendar. It’s a damn vulnerable piece of paper upon which hundreds of smaller, equally vulnerable order slips are taped. If those buggers aren’t securely fastened to their allotted real estate, they can float down to the floor and disappear behind the work bench. Or into the heating vent. Say bye bye to Eli’s first birthday cake. But say they stay put, that doesn’t necessarily mean they aren’t mini pastry bombs waiting to detonate. What if you put the slip on the wrong day or if you forget a major part of the order. This happened not so long ago. When a slip was allocated to the little 4-inch square that belongs to a Sunday. This order was for four cakes. To be picked up in the morning. And aside from the number and kind of cakes, there was no other information. So I got organized on Saturday. But not really in earnest because the order was for Sunday and I’d make the cakes and all the fillings that didn’t need an inordinate amount of time to set on Sunday too.

Secure and light-hearted, I puttered around the kitchen completing tasks more time sensitive. And then one of our lovely counter people came back to the kitchen and stretched on tippy toes so she could reach the pile of slips that were Saturday’s orders. And she kept flipping through, not finding the one she’d come for. And this makes me panic. Because I know this can only mean something’s gone painfully awry.

“I can’t find the slip for the four cakes that are getting picked up today.”

“Those are for tomorrow. Whoever took the order put the slip on Sunday. And it’s got Sunday’s date written on it. They’ve made a mistake and come a day early.”

“I don’t think so, they’re on their way to the wedding.”

“The wedding that you’re making the cakes for. That wedding.”


I didn’t think it possible but it turns out I can make four wedding cakes in two hours. Unfortunately, to accomplish this feat it’s required that I transform into a horrifying, bad mannered pastry beast.

But sometimes the order board can conjure some laughs. Like the time someone ordered a frangipane pear tart. That in and of itself isn’t so spectacular since we make this stuff regularly. A flaky crust brimming with almond filling and dotted with halved pears and baked until the almond frangipane filling rises almost to the point of covering the fruit entirely and turns a luscious golden brown.

“Pear FRAN JAPAN Tart.” When I deciphered it and stopped laughing, I asked Adrienne, who has mastered the art of outsmarting her dyslexia and has devised creative alternatives to traditional spelling, “Did you take this order for a frangipane tart?”

And she said “Yeah, fran japan.”

It was plastered securely on the right date, all the information otherwise in order, easy to decode and good for a laugh. And, most important, it didn’t require me to turn into a nasty kitchen troll. Works for me.

So make yourself a little Fran Japan filling and keep it in the fridge for those days you realize at the last minute that you were supposed to make dessert for that pesky potluck. Layer the “Fran Japan” in a pie crust, onto some puff pastry or some short dough, place halved and cored apples, pears, plums or apricots on top and bake at 350 until golden and springly to the touch. No kitchen troll required.

Place almond paste in a food processor and grind until fine. Add butter, flour and egg and process until smooth. That’s it. Really.