My grandmother, Omi , was a vehicular menace. She drove a Fiat 500 the size of a State Fair blue ribbon turnip, which suited her beautifully. But folding my long stems into that Spam can on wheels, even at eleven, was a task meant for a Yogi. She’d take turns at high speed, dart across tram tracks in front of oncoming ten-ton commuter cars and she’d put the car in neutral at the crest of any decent sized hill so we’d go careening down at whatever speed gravity chose. Usually something close to warp. That last little quirk of hers had a purpose. She was saving gas. She used none on the way down and we’d have so much momentum from our free fall, that we could comfortably coast a country mile without her punching the pedal again.

She was a product of the Second World War, so frugality swam deep in her marrow. My Tante Erika tells stories of her creative culinary ways during the war, specifically her repurposing coffee grounds. She’d savor her daily cup and then save the wet java mush for cake. I’ve yet to find a recipe that calls for soggy grounds but I do have a recipe that puts an otherwise wasted byproduct of espresso production to good use. By adding the cast off bits of finely ground espresso that get brushed away just before everything is tamped into a tight puck and infused with hot water to myriad recipes. I save those bits and dump them in cheesecake batter or into short dough as a crust for a beautiful tiramisu inspired tart. You can also add a touch to shortbread, giving a swift kick to that otherwise mellow butter bomb. And it’s an elegant way to save an otherwise wasted ingredient. 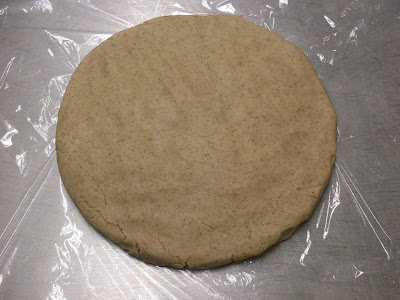 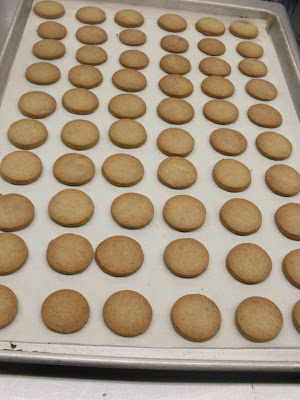 In the bowl of an electric mixer fitted with the paddle attachment, cream together butter and sugar. Add vanilla. With mixer on low speed, slowly add flour, espresso and salt. Mix until well combined.

Pat the dough into a nice round and cover with Saran Wrap. Refrigerate until firm, at least 2 hours and up to overnight.

Preheat oven to 325 degrees. Gently roll the dough on a minimally floured surface (just enough to make sure it doesn’t stick and make sure your rolling pin has a nice dusting of flour as well) and roll until about ¼ inch thick. Make sure your dough is still very cool.

I chill the dough one more before baking to ensure the cookies keep their shape.  Bake until they are ever so slightly brown.