Lost and Found by Pain Perdu 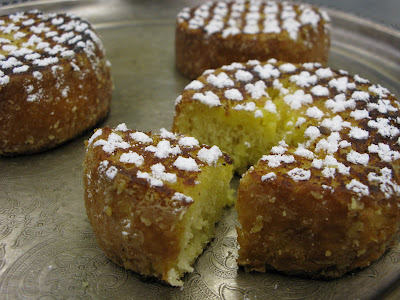 I was lost once. Cartographically speaking, I was in a geographically familiar space, at a restaurant with colleagues. But the rest of me was adrift. I was terribly unfulfilled and starting to fear that I’d missed something along the way. A metaphysical sign that said “Dummy, you’re going in the wrong direction.” But then I hadn’t yet become a baker. At that time my work was something else entirely. So you see, I was lost.

Despite my soul sickness, I still enjoyed that dinner. It was delicious. And I’m not one to say no to wine in any quantity. So I partook.

And then dessert came. I don’t leave room for dessert. I don’t see the point. It’s usually a catastrophic loser. But this dessert in front of me, a thick crispy round of brioche, soaked in sweet custard and cooked in a skillet just to the point of gentle brown and delicately sprinkled with confectioner’s sugar was a revelation. The perfect Pain Perdu. Translation: lost bread. And what better for a lost soul.

I didn’t share a bite. And just as I felt capable of movement, of rocking myself from sated prone to standing, the pastry chef materialized with a plain paper bag that she set on the table. “This is for later.” And inside, hot from the oven and glistening with maple glory, was that spongy coiled miracle of pastry, a sticky bun. Lord have mercy.

She was a celestial flour dusted crossing guard; a woman nudging me across the street to a sugary destiny. “Dummy, this way. Towards the kitchen.” I took one look at her contented face and gentle presence and thought, “yeah, I could be happy baking for a living.”

So if you’re lost. If you’ve found yourself on a path you hadn’t intended taking, let pain perdu find you.

I give all credit and thanks to Karen DeMasco, the brilliant pastry chef at Craft in NYC. I don’t know her but I do know her work. And if your pastries are the measure of your soul, she should have been cavorting with her fellow angels long ago. She makes pain perdu and anything else she touches with her nimble baker’s hands unforgettable. To get the round slices, bake the brioche in a coffee can coated with non-stick spray.

You can use brioche for so much more than pain perdu. And you’ll have a ton left over after you’ve use it for this application. So tomorrow, I’ll give you another recipe to use the rest.

For the sponge, dissolve the yeast in the warm water and honey in a mixing bowl until the yeast has bloomed. Add flour and mix on slow until the sponge is smooth. Cover and let rise until it has doubled in volume.

2. For the dough, add the granulated sugar, salt and eggs to the sponge and mix until incorporated. Add the flour and mix for a bit and then add the butter a bit at a time. Mix until the dough forms a ball, the dough shouldn’t stick to the sides of the bowl and should look shiny

3. Cover the dough and set aside until doubled in volume.

4. Punch dough down and transfer to a floured surface.

5. Pat the dough into a rough rectangle. Cut a quarter of the dough off and divide that ¼ piece into 1/4s. Roll each into a neat ball and place at the bottom of the coffee can. The dough should reach about ¼ way up the can. Let the dough rise until it reaches the top of the can and bake at 325 degrees until the top is brown. About 20 minutes.


For the Crème Anglaise

In a heavy sauce pan, heat the cream and milk until scalding. In the meantime, combine the egg yolks, sugar and vanilla in a mixing bowl and beat until fluffy. Once the cream/ milk mixture is piping hot, reduce the speed of the mixer to the lowest setting and slowly add the hot cream mixture in a steady stream until fully combined.

Transfer the mixing bowl full of still rather watery custard on top of a simmering sauce pan of water and whisk until the sauce thickens enough to coat the back of a spoon. This took me 15 minutes today. It could take less but it very well could take more. Once it’s thickened just that much, transfer to a bowl, cover with Saran Wrap and chill.

Remove the brioche from the coffee cans and slice into 1 ¼ thick pieces. Pour 2 cups of crème anglaise into a shallow bowl large enough to fit four pieces of brioche. Soak the brioche for 5 to 10 minutes. I’ll ladle crème on top of the naked side so hasten the process. Otherwise, after a few minutes, flip your pieces so it’s coated evenly.

In a non-stick pan, melt ¼ stick of butter on low heat. Add your four pieces of brioche and cook on medium/low heat until golden (4 to 5 minutes) and then flip to cook the other side. Sprinkle with confectioner’s sugar. And enjoy. Of course you can use maple syrup but try this first without.