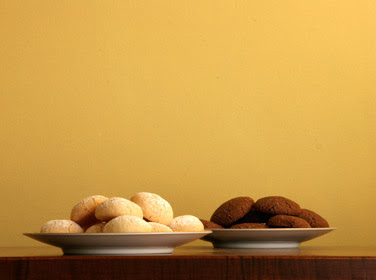 (my macaroon in the rustic style)
There’s very little that offends me. If you don’t like something I make, it may hurt my feelings but that’s life. It’s, as the German’s would say, “geschmacksache.” It’s the stuff of taste. I for one will only eat a BLT accompanied with the thinnest varietal of crappy white bread. God knows I appreciate a luscious artisinal loaf but the “B” stands for bacon. Not bread. So I appreciate your offer to make me a BLT on crusty fineness but it will be lost on me. It’s geschmacksache, afterall.

But there’s a difference between taste preference and ignorance. To wit, the knuckleheads who ordered my French macaroons online and wrote back to say that they were not what they expected. That they had anticipated receiving Parisian macaroons in the vein of Laduree or Pierre Herme. Which in and of itself is fine despite the fact that they had heard about my little treats from watching me make them on Food Television wherein I spoke of the recipe and its origins. The camera crew even did a few glamour shots of my French macaroons, gauzy close-ups and all. So they really couldn’t say they weren’t anticipating receiving the very thing they saw on television.
So here’s what got my apron in a twist. The gentleman (and I use the word loosely and generously), went on to say that they would order from me if I started to make macaroons as they do in France. 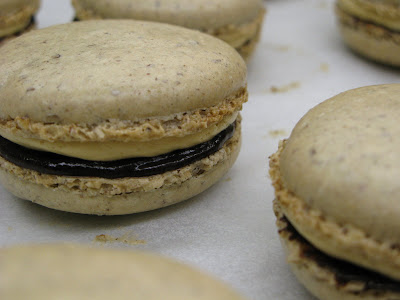 (my macaroon in the Parisian style)
The formidable Dorie Greenspan does a bang up job of describing the age-old French dust up over which kind of “macaron” is best, that of the countryside or that of Paris. Because there two kinds. One that hails from the ancient recipe of the Macaron Sisters, a delicacy that is more rustic in appearance and texture. It isn’t sandwiched with ganache or butter cream and isn’t dyed with brilliant hues, as are the Parisian macarons. So there are two kinds. Made in France. I make one kind and sell it online. I make the other kind and sell it in the shop.

I gave the guy his money back because I really didn’t want to go into it with him. OK, I did write a lengthy dissertation on French macaron but I still gave him his money back.

So what’s the point of this little diatribe. No point really. Just an example of how a little knowledge can be a bad thing . And can really piss off a baker.