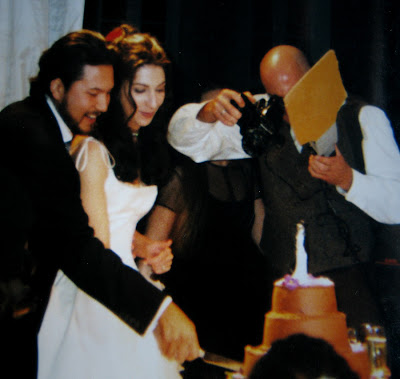 My mother was the Grand Poobah of culinary dismissiveness. It was guaranteed that no matter the caliber of the restaurant, 3 Michelin or drive-through, she’d find fault in the goods and wave away her plate with, “It’s unclean.”

My wedding cake tastings were no exception. Personally, I couldn’t have given a rat’s ass about my cake. There were things more pressing, like the fact that my mother was terminally ill. Hence throwing together my wedding a bit more hastily than we might have otherwise. I just wanted her there and pain free. I’d have been fine with a Carvel Cookiepuss.

But mom demanded cake, a good one. It was the only thing she insisted on for the wedding. So we went on the rounds of the usual suspects, the shops any discerning L.A. bride would visit in search of tiered wedding bliss. Problem was, most Hollywood brides didn’t bring along golden palated German mothers with limited life spans. And with only one option left for a cake, (she’d already dismissed the others), and this one having the reputation for the finest cake, it had to be this bakery. Not so, said my mother. She took a disdain filled bite of a sample and declared the truth for all to hear, “This tastes unclean, it's not real buttercream.”

So we did what we should have done in the beginning. We started baking, eventually settling on a moist almond cake and, of course, real chocolate buttercream, not the Crisco drenched, waxy tongue coating dreck layered on most wedding cakes.

We passed along the recipe to our caterers. I didn’t give them any tear pages of fantasy cakes from Martha Stewart Weddings. I didn’t ask for a monstrosity to feed hundreds when we’d only be a cozy few. I just gave them the instruction that it needed to taste good, it had to stay upright and it had to be made with real buttercream because these things would make my mother happy.

Simmer water in a sauce pan. Place egg whites and sugar in a metal mixing bowl (i.e. your KitchenAid mixing bowl). Get a candy thermometer handy. Whisk the egg whites and sugar CONSTANTLY until the sugar is melted and the concotion reaches 160 degrees so that all evil buggers are killed. But do not let the eggs cook and curdle! So whisk constantly.

Transfer immediately to your mixer and whip on high until the meringue has double or tripled in volume, is white and shiny and holds a peak and is cool to the touch.

With your mixer on medium slow, add your small cubes of butter a little at a time. Not too slowly, just slowly enough that the addition of the butter doesn’t cause the egg/sugar/butter sludge to fly out of the bowl.

You may not need all the butter. You’ll notice that the meringue will start to deflate almost immediately. That’s ok. The fat content of the butter has that effect. The buttercream is starting to come together when you notice that tiny little sluggy bits start to appear around the perimeter of the bowl and the entire mixture is starting to look likes it’s curdling. You’re getting there. Put the mixer in medium high and put in just a few more chunks of butter and then whisk on high until the butter cream looks light and fluffy. If you’re working in a warm environment and you think you’ve already added more than enough butter and you have a liquidy soup that you think will never come together, stick the whole mess in the freezer for a few minutes and then resume whisking.

Once the buttercream is light and fluffy, you can add a bit of ganache for a chocolate buttercream or ½ cup of fruit puree for refreshing cake filling.