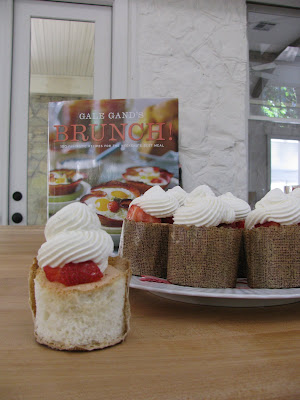 I’m surprised that you haven’t been keeping up with my on going skirmish with heaven’s fluffy sugar H-bomb. I mean, we’ve been waging this war for years. Quite loudly. With all manner of colorful language thrown in.

“What’s with this stupid f$(*@#(*&#$ing thing! If it doesn’t fall in the oven, it slips from the f(*#$(*&!ing pan while it’s upside down cooling. And what kind of sh@(*&#tty cake requires being held upside down in suspended animation for an hour? That’s no angel. That’s a damn self absorbed demon cake.”

Some of heaven’s corporal creatures have been caught in the cross fire of my ground war. For instance, I didn’t bother telling Agnes that I had an Angel F-ing Food cake in the oven one afternoon. The protocol in my culinary foxhole is to make all manner of biblical pronouncements on the eve of putting the damn thing in the oven.

“If thou darest slam the door, thou shalt face the wrath of lunatic baker lady!”

“Thou shalt not speak above a whisper in this pastry sanctum sanctorum, unless thou wishest to push crazy baker lady over the edge.”

You know, the usual.

But it was the end of the day and it was just Agnes left at the shop. And she’s a sweetheart. Really. Her name means “Lamb of God” and she does right by it. So I didn’t bother with the standard standing on tables, flashing my canines and pounding my chest. I figured Agnes would be chill. So when I checked on the accursed thing and it had cratered, I didn’t think much of it, don’t get me wrong, I threw a tantrum. But I didn’t blame anyone but that stupid, evil cake.

The next came out well but upon flipping it upside down on a wine bottle, it decided that it would be hi-freaking-larious if it shimmied out of the pan a wee bit early. HAHAHAHA! That cake is such an evil scamp.
Somewhere along the fifth try, my body encrusted in egg whites and self hatred, Agnes came along to smooth my feathers. She’s good at that sort of thing.

“So what’s wrong? Why all the profanity?”

“Oh Agnes, I hate Angel Food. I know it’s blasphemy but it keeps crapping out on me.”

“Yeah, well, let’s see. Was there an Angel Food in the oven about 3 hours ago?”

“So I had to get a bag of ice from the back freezer. Because she demanded an ice drink in the middle of a blizzard. And it needed to be broken apart a bit, so I pretended that the stove was her cranium and proceeded to slam the ice against it.”
The rest of the story has been redacted by the Food and Drug Administration’s "Censorship of Explicit Violence Against Food" Board but rest assured, Agnes and I are still terribly good friends.

So you’d be surprised to hear that when I received a copy of Gale Gand’s beautiful new cookbook “BRUNCH!” that of all the recipes, the first one I went to was “Angel-Food Muffins.” Because there’s nothing that says "psychosis trigger" like a recipe that makes 12 of the little f@!&$ers instead of just one.

So here was my deranged thinking, “If Gale Gand says this is possible, then it’s possible.”

I was also alone in the kitchen.

Whether I like to admit it or not, I really like Angel Food and maybe, if I split it up into 12 portions, one would survive. And I didn’t have to turn them upside down.

Her recipe calls for diced frozen cranberries, which I think is a lovely addition to an otherwise thunderously sweet concoction. But I didn’t have any and I wasn’t going to add weight to the batter. And what do you know, they came out beautifully.

Which leads me to ask the question, if you make a successful Angel Food Cake and no one is there to witness the miracle, does it count?

Get Gale Gand’s book, “BRUNCH” when it’s released this April. She tamed my baker’s demons with some lovely recipes.