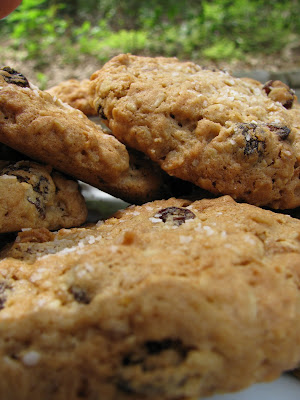 I’m such a turd sometimes. I’ll go around for years saying things like, “Yech, I’ll forgo the free spa pass. I loathe massages.” It’s a fundamental flaw in my character, one that needs complete and permanent eradication. I’ll declare definitive and detailed partialities. When in fact, I’m really just talking out of my ass. So maybe I never enjoyed the creepy guy in German class giving me an impromptu shoulder rub. Why that translated into a lifetime of turning down professional, aromatherapy infused deep-tissue goodness I’ll never know.

Here’s a humdinger that I spouted for a decade, “Nah, I don’t like oatmeal/raisin cookies. But thanks for offering.” On what occasion did an oatmeal/raisin cookie ever offend me? I don’t recall ever having had a bite of one and spitting it out in rank disgust. Maybe it wasn’t my all time favorite but still. That’s no reason to get all uppity and snooty about it. And when I played with a few recipes, I discovered that Oatmeal/Raisin cookies are pretty much my favorite cookie. Ever.

Will I ever learn?

Extra coarse grain salt to sprinkle on top
Preheat oven to 350
Combine flour, cinnamon, 1 teaspoon salt, baking powder and soda into a bowl and whisk together. Set aside.
In your mixer with paddle attachment, cream together butter and sugars until light and creamy. Add eggs one at a time. Leaving time between each incorporation so that each egg is fully integrated into the batter before you move on. Add vanilla. Integrate just like the eggs.
Slowly add flour mixture until just combined. Add oats and mix for a few seconds before adding raisins.
CHILL mixture in refrigerator for at least ½ hour. CHILL! CHILLL CHILL CHILL! This is important, I don’t know if I’ve made that clear. So I’ll say it again, CHILL THE DOUGH.
Scoop dough with medium sized cookie scoop and press down on the dome of the dough to flatten just a bit. Sprinkle the top of each cookie with a wee bit of coarse salt.

Bake at 350 for 12 to 15 minutes, turning the cookie tray every five minutes to make sure the cookies brown evenly.