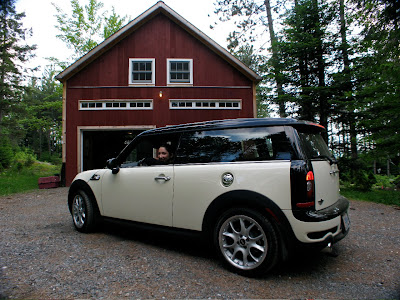 (the new pastry delivery vehicle!
now I just need a damn space to make the pastries.)
I’ve been running around these fair green mountains in search of a space for the second coming of Gesine Confectionary. I’m not asking for much. It has to have walls, running water and an absence of non-bipedal creatures. That’s right, I’m inviting kangaroos to the party and maybe a few of those adorable running lizards they show every nine minutes on Animal Planet promos. You can never see too many upright, sprinting lizards in my book.

Yet, despite my open heart and love of anthropomorphizing animals to the extent that I’ll invite them to work in the kitchen, my journey has not been simple and I’ve not yet found a space for my cold ovens and even more frigid baker’s hands. But fear not, I shall continue my quest unabated. I’ve even begun to regard my barn not so much a receptacle to house two cars and my husband’s studio but as a possible commercial bakery. I’m incorrigible and just a wee bit evil.
But life hasn’t been entirely about my real estate shakedown. I’ve also been outlining and generally noodling with my second book. Hey, just because the first one hasn’t come out yet doesn’t mean I can’t plug away on the second. Which leads me to ask, are any of you about to start up a food business? Have you just started a food business? Have you been running a food business for some time? How’s that working for you? I want to know and I may want to write about it because there’s kindred connection among us foodie knuckleheads who, despite all the known hardships and low profit margins, can’t NOT work with food. So tell me your stories. Think of it as therapy.