Her Royal Highness, the Kouign 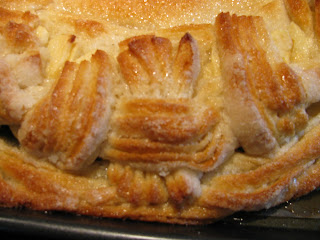 It was recently brought to my attention that there was a lively debate brewing in a forum on IMDB, the Internet Movie Data Base, regarding my sister. No surprise there, really. Unusual was the topic being fervently discussed and the fact that I was used as a piece of evidence in a particular person’s line of argument.

The topic? “Is she white…” The evidence proffered to prove that she wasn’t? The following statement along with a handy link to a picture of me:

“For years I've said she seems to have a little color, or is at least Jewish. I know her bios say she's German. But she is dark. And finally I saw a picture of her sister (that would be me), and she's definitely not white.”

The first reaction was to wax Vonnegut, “who gives a flying f*ck through a rolling donut?” Someone has spent years contemplating this topic? Is Goebbels still alive and no one warned us? A woman of German ancestry…not blonde???? Say it isn’t so!

Oh, come to think of it I can come up with a ridiculously mustached and very iconic example of a non-blonde German to put this argument to rest post haste but really I think I’d be doing myself more of a disservice by mentioning the little shit at all.

But all this is silliness because everyone knows that there’s no such thing as truly German or French or English. We humans get around, biologically speaking. When my zygotes where getting down to brass tacks in utero, I’m betting there was a vast selection of traits, spanning ancestors who came from every corner of our known universe, from which to choose. And there’s a very good chance that some of the choice bits of genetic material that would make up my physical biological identity were not “white.” I’m not a bit sorry, however, that I cannot parse out what is and what isn’t for that curious novice dabbler in eugenics who posted his idiotic question on IMDB. Because again, to quote Vonnegut, "who gives a flying f*ck through a rolling donut?"

Which brings me to a region of France called Brittany and the pastry Kouign Amann (pronounced “queen ah-mahn”). Kouign? Amann? That’s not French! Exactly, it’s Breton but then, it’s a Celtic language spoken alongside French within the confines of France. So then what the hell is it? Is it French or is it Celtic? To which I say, who gives a flying…. Let’s just say it really doesn’t matter what it is, it’s simply a damn fine pastry.

Like some of the best things in the world, Kouign Amann is a synthesis of some very spectacular ingredients. It’s a cross between a croissant, a palmier and a butter cake. Buttery, caramelized luscious goodness. The very qualities that defy regional categorization and fall into the universal category of , “get in my belly you gorgeous butter bomb.”

For the butter Block:
4 sticks of butter, cubed

For the sweetness:
2 to 3 cups of sugar 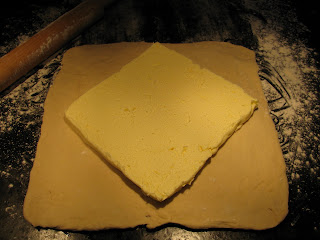 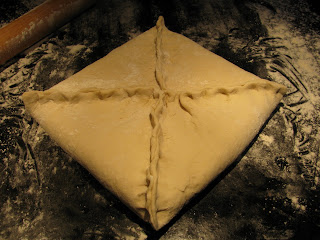 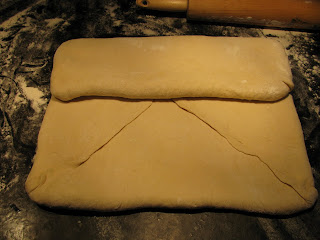 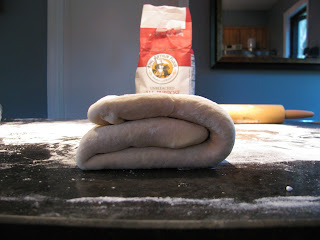 starting a single turn a completed single turn
For the butter block:
Cut the butter into small pieces and place in mixer with paddle attachment. Mix until the butter is still cool to the touch but well combined and spreadable.
Transfer butter to a sheet of Saran Wrap and manipulate into a butter block about 8” x 8”. Cover and set aside in a cool place.
For the dough:

Bloom yeast in 1/8 cup lukewarm water until foamy. Transfer yeast and remaining 1 ¾ cups water into mixing bowl with dough hook attachment. With the mixer on slow, carefully add all remaining ingredients and knead until a shiny dough has formed, about 10 minutes. Cover with plastic wrap and let rest in refrigerator for 15 minutes.
Sprinkle your work surface with a flour and roll dough into a square approximately 9” x 9”. Place butter block diagonally on the dough. Gather the dough “triangles” to form a neat packet that covers the butter entirely and using a rolling pin, roll the dough into a rectangle about 20” long x 12” high. Make a single turn, cover with plastic wrap and let rest in the fridge about 30 minutes and roll out dough once more into a rectangle and make another single turn and let rest for another 30 minutes.
This time, when you take your dough out of the fridge, cut your dough “pillow” in half. This recipe is enough for two large Kouigns and then some. I take one half a pillow and freeze for another day. To use the frozen half, allow the half pillow to thaw over night and proceed to the next steps.

Sprinkle about ½ cup of sugar on your work surface and place your dough block on top. Sprinkle another ¼ cup evenly over the top surface of the dough and roll the dough out into a rectangle. You’re going to make two more single turns as before, but this time you’re going to be using sugar instead of flour and as you fold the dough, sprinkle sugar liberally over the exposed surfaces. Cover as before, let rest for 30 minutes and make another single turn with the sugar. 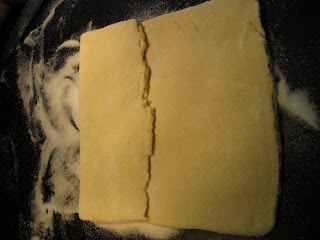 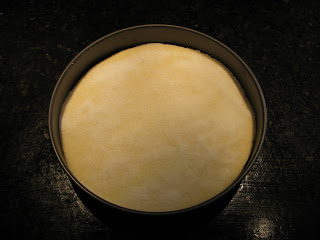 Allow the dough to rest about twenty minutes and then roll the dough into a rough circle as best as you can. Many people don’t worry about the edges being perfectly round and just nudge the dough into the general dimensions of an 8” or 9” round parchment lined cake pan. That’s fine. This pastry is not a “looker” no matter how you approach it, so clean lines are pretty much useless. However, I usually cut out a neat circle using a cake pan as a guide and then I’ll use the stray bits to make something creative, like line a strip of dough with sliced apples and then lace extra strips of dough on top. 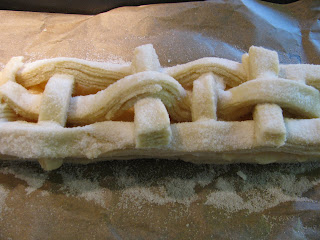 Allow the pastry to proof in a warm place for about 30 minutes while you preheat your oven to 400 degrees. Sprinkle the Kouign once more with sugar before you pop her in the oven and bake for about 40 minutes and the top is browned and caramelized.