Götterdämmerung: or Twilight of the Slobs 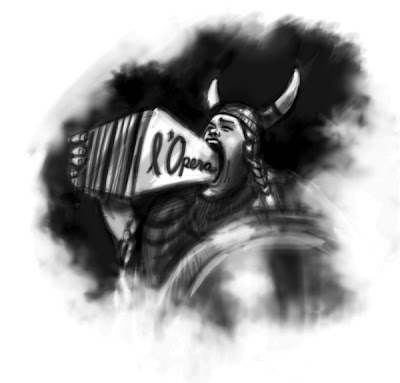 These words, often followed by a threat of corporal punishment on a draconian scale, were my mother’s well-worn mantra. She’d take a look at my bedroom and become fueled with the fury of a thousand Valkyrie. It was terribly helpful that her name was unapologetically Wagnerian, Helga Mathilde, and that she was an opera diva by trade because I’d hear her all the way in Stacey Coleman’s basement across the street, bringing shades of Götterdämmerung to suburban D.C. and scaring the crap out of me and anyone within earshot on 26th Street.

I take it as a true testament of my deep character that despite my mother’s impressive shock and awe campaign of cleanliness, I have retained my slovenly ways into adulthood. Not once did her wrath impress upon me the desire to be a neatnik. Ask anyone who’s roomed with me. Or my husband, Ray, who has come to call me Lieutenant Dan, as he finds my pants strewn about the house left exactly where I’ve shaken them off, one leg always tucked away inside giving the impression that I’ve only one gam (hence the tip of the hat to Forest Gump’s Lt.). And it’s not uncommon to find a sock curled up inside along for the ride.

But being an inveterate ragamuffin is one thing. It’s annoying, disrespectful to those in immediate view and lazy. However, I can assure you that my kitchens, while often disorganized and occasionally reminiscent of Kansas in the throws of an Oz-ian tornado, are clean. I’ve seen repulsive professional kitchens and it always shocks me. How is it that I, my mother’s Schlampeliese, can have such a reaction? Because there is nothing more discouraging to baking than a crust of grease on an industrial stove, chunks of dough imbedded in the floor or melted chocolate clinging to a workstation. So while I view my devil-may-care attitude towards housework as an adorable annoyance, I cannot imagine creating in a kitchen infected by this flaw. So if you find yourself artistically hampered in your kitchen, at your computer or at your easel, chances are there’s a mess that needs cleaning. In such a case, I suggest that you take a deep breath and bellow from the depths of Valhalla “Aufräumen! Aber sofort!”