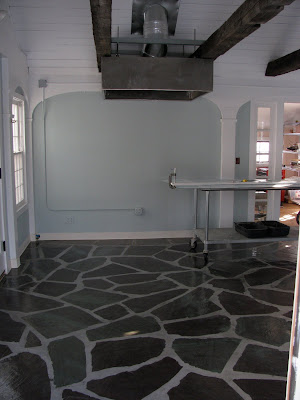 (the space! refurbished floor! sparkling paint & multiple electrical outlets! a useless, not to code new hood the size of a small European principality!)
First you make progress. New flooring. Electrical. Mop friendly baseboards. 3-bay and mop sinks. Oven ordered and set for delivery.
Then you inevitably hit the snag just as you can taste completion. Just as you dare utter a possible date in the near future when you imagine testing your nifty new equipment. Just as your mind turns to superficial details like, "Ooooh, wouldn't it be lovely to paint that patch of wall with chalkboard paint?" Just at that moment of complacence someone has to harsh your pastry mellow. 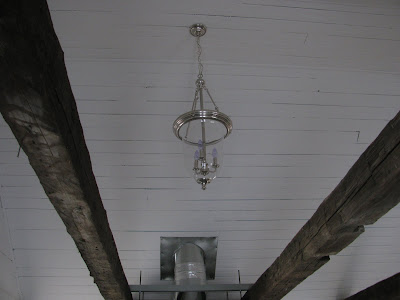 (the hood may be useless but my the lighting is pretty)
"Uh, Mrs. Prado? The hood that we just manufactured specifically for your space and installed to the tune of a kagillion dollars. Yeah, it isn't to code."
WTFudge?
I have this problem sometimes, where I trust professionals. I figure, "Hey, they sell and install commercial restaurant equipment for a living. They don't tell me how much fruit pectin to put in a gelée; I don't tell them how to vent a commercial double oven."
But anyone who starts up a business will tell you that there are roadblocks. Some you can anticipate. For instance, when the health inspector came into my space before we'd first purchased it I was pretty sure he'd tell me that shag carpeting was a no no in a commercial bakery. What I don't anticipate is having a commercial hood built and finding that it doesn't remotely fit the fire code, which is a shame since I thought it looked snazzy and I had some plans for finishing it up to look even snazzier. Oh superficial woman, when will you be realistic and realize that the second you start dreaming of pretty finishing touches the underlying mechanics kick you in the ass? 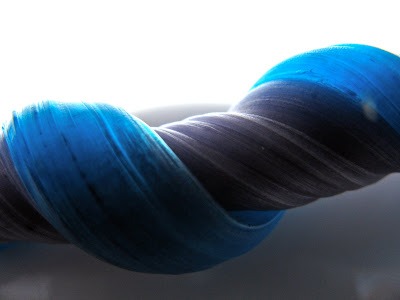 (sugar!)
However there is a silver lining rimming my useless gargantuan shiny new hood, I've sold a cookbook to the lovely people at Stewart, Tabori and Chang (say that 5 times really fast while chewing a caramel). It's a cookbook about sugar. Shocking, I know. So for now, I'm busy inventing sugary delights in the manner of Willy Wonka and that has taken the edge off of the "Great Hood Debacle of 2010." Because there's nothing like a sweet candy morsel to take the sting out of life's little roadblocks. And it's even better when you have a whole bag of sweet candy morsels.