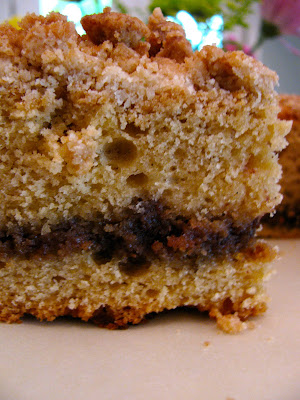 "Do you have a killer coffee cake recipe?"
It's a simple question. It covers all the bases. I know that (1) someone needs a recipe, (2) someone needs a coffee cake recipe to be exact and (3) it must be a "killer" recipe, not "meh" not "it'll do" but killer.
Any normal person in possession of such a recipe would simply say, "Why, yes. Yes indeed. Let me get that to you." That's assuming the recipe holder wants to part with the secrets of murderously good baked decadence.
Now let me give you an example of what it looks like to ask me for a recipe, let's say on twitter. And remember, twitter is a medium rigged to keep your responses short and sweet.
@capitolclio: @closetmastrbakr, do you have a killer coffee cake recipe.
@closetmastrbakr: @capitolclio what's your coffee cake preference? Yeasty or cakey? chocolatey or cinnamony? something with a crumble on top? Fruit? Denser, more butter? Or lighter and fluffier?
Ask me a simple question, get a litany of culinary nitpickery in response. But get past my badgering and you'll get a bespoke treat, just like...
CAPITOL CLIO'S KILLER COFFEE CAKE
For Cake:
1 cup brown sugar
1 cup granulated sugar
2 sticks unsalted butter, room temperature
4 eggs
½ cup sour cream
1 cup milk
3 cups flour
1 tablespoon baking powder
1 teaspoon salt
1 tablespoon vanilla (vanilla bean paste if you can find it)
Whisk together dry ingredients in a large bowl: flour, baking powder and salt.
In a mixing bowl, beat together sugars and butter until light and fluffy. About 4 to 5 minutes with either a whisk or a paddle attachment. Scrape down the bowl and mix for a second to incorporate any lingering ingredients that were stuck to the side of the bowl.
Add eggs, one at a time. Beating about a minute between incorporations and scraping down the sides of the bowl every now and again.
Add sour cream and beat until just incorporated.
Starting with the flour, add flour and then milk in alternating pours. About 1/3 of each at a time. Scrape down the sides of the bowl again just to make sure nothing's hiding on the sides or the bottom.
For Filling:
1 cup brown sugar
1 cup pecan pieces
1 tablespoon cinnamon
Pulse all the ingredients together in a food processor until a crumbly paste forms.
You can leave out the pecans and stir together the brown sugar and cinnamon. Just add an additional ½ cup of brown sugar.
An alternative is to take out the pecans entirely and break 3 toffee bars (Scor, Heath or similar) into the food processor with the brown sugar and cinnamon. Grind up those tasty treats with 1 tablespoon flour and sprinkle over the first layer of cake and proceed with directions as if nothing at all unusual happened.
For Crumble:
1 pound of butter (4 sticks) melted
1 cup granulated sugar
1 cup brown sugar
½ teaspoon salt
5 cups flour
1 tablespoon cinnamon
Place the dry ingredients in a large bowl and mix together with your hands. Pour in the melted butter and stir with a wooden spoon until the butter is fully incorporated and the crumble starts to form clumps. You may have to use your hands to really get into all the corners.
To assemble:
In a large 9" x 13" baking pan (or another similar baking dish like a deep brownie pan) liberally sprayed with non-stick cooking spray, spread half the cake batter evenly. You can also use two 8” cake pans and make 2 separate coffee cakes, one for now….one for when your guests leave. Just keep in mind that the baking time will probably be cut in half.
Sprinkle the filling in an even layer on the first layer of cake, making sure to break apart any large clumps. 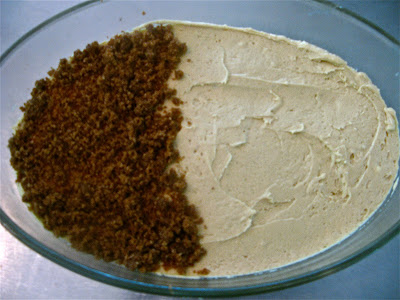 (mid filling sprinkle)
Spread the remaining batter on top of the filling in an even layer and with a long skewer or a knife, make swirling motions in the batter to incorporate the filling into the cake batter as if you were making a marble cake (but not as vigorously. You want a distinct layer with slight waves of filling infiltrating the top and bottom layers of the cake). Sprinkle half the crumble over the top layer of batter. I use about half of the crumble and freeze the rest for a rainy day.