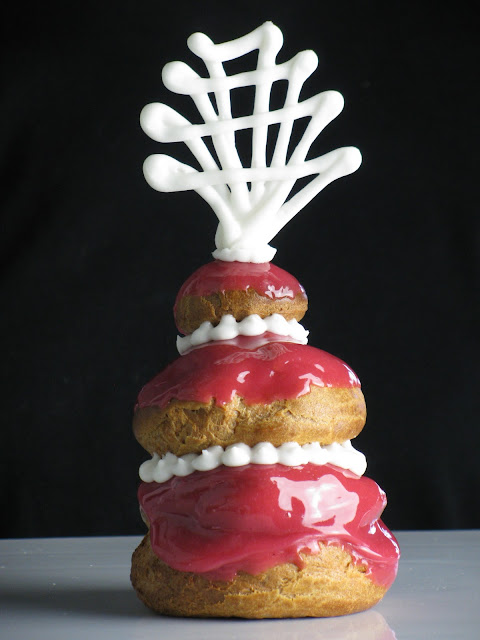 I present to you the lovely Religieuse for no other reason than they are delicious, beautiful and vibrant.  And writer extraordinaire, Laura Zigman, was tiring of the burnt umber so pervasive in all my baking pictures of late (it's pumpkin season, so sue me).
The French have a bevy of uses for choux:  the eclair, cream puff, gougere, Paris Brest, Croquembouche, St. Honoré.  Give a French baker some choux, they'll scare it up into something magnificent.
Even French nuns join in on the choux hijinks.  Hence, the holy in the puff.  Traditionally, the choux treat is made of one large choux puff topped by a second smaller orb.  But I figured a chaste novitiate wouldn't refuse a third when offered. 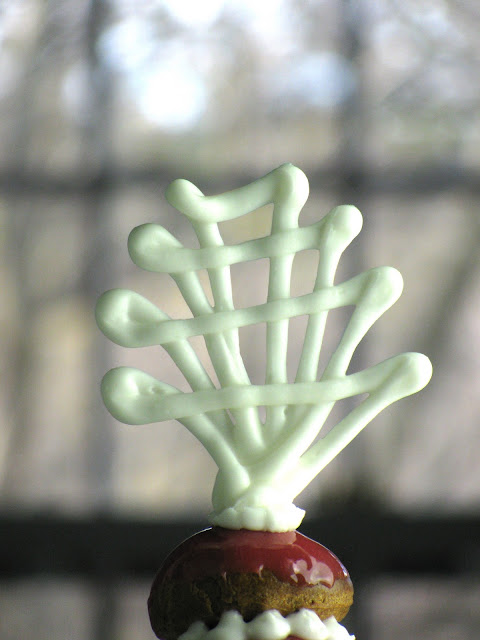 La Religieuse
Choux Paste
Follow the directions in the post but instead of long eclairs, pipe a large, round dollop that's about the diameter of a tennis ball and then another that's a little smaller than half that size.  Pipe the large choux puffs on a separate sheetpan from the smaller ones. Bake as directed, keeping an eye on the smaller puffs so they don't over brown.  DON'T open the oven in the first 15 minutes of baking, lest those puppies fall.
THE FILLING
Raspberry Pastry Cream
Ingredients
1/2 cup heavy cream
1/2 cup milk
1/4 cup sugar
3 egg yolks
pinch salt
2 1/2 tablespoons cornstarch
1/8 cup raspberry purée
for lightening:
1 cup cold heavy cream, whipped to stiff peaks
Procedure
Whisk yolks, sugar, salt, cornstarch and purée in the bowl of an electric mixer until light and fluffy
Simmer cream and milk in a heavy saucepan and slowly pour the hot cream into whisking sugar/yolk mixture until well combined.
Transfer back to the saucepan and whisk over medium heat until thickened.
Place in a bowl and cover the top of the cream with plastic wrap to prevent a skin from forming.  Refrigerate until completely cool.
Stir the pastry cream to loosen and gently fold in the whipped cream.  Refrigerate if not using immediately.  Otherwise, fill a piping bag fit with an open tipped pastry tip (large enough to allow the cream to flow easily but small enough not to create a monstrous hole in the cream puff.
THE COVER (or habit, if you will)
Pouring Fondant
1 cup sugar
1/4 cup corn syrup
1/4 cup water
1/4 cup raspberry purée
1/2 teaspoon cornstarch
squirt of lemon juice
Procedure
Stir the ingredients in a heavy saucepan over medium heat until the sugar has completely melted.  Wipe down the sides of the pot with a damp pastry brush to remove any errant sugar crystals. Clip on a candy thermometer and heat to soft ball (235º F).
Immediately pour the syrup into a food processor and allow the syrup to cool, undisturbed, until the temperature has dropped to 140º F.
Process for a few minutes, until the syrup becomes opaque and a little thicker (just a few minutes).
Dip the choux puffs into the fondant and hold upside down to remove an excess.  Allow the fondant to dry, at least 15 minutes before filling.
TO FILL:
Poke a small hole in the bottom of each choux puff with the pastry tip or a clean wooden dowel.  Insert the pastry tip into the choux and gently squeeze pastry cream into the puff until you feel the weight increase.  Don't go overboard and split the poor thing.
Fill the small and large choux puffs.  Set aside and make some royal icing
TO FINISH
For the Royal Icing.
2 cups confectioners sugar
1-2 egg whites
Procedure
Place 2 cups of confectioners and 1 egg white into the bowl of an electric mixer fit with the paddle attachment.  Beat until the mixture forms a paste.  If the mixture is dry, add a touch more egg white.  The consistency is for piping not for flooding, so it should be a thick paste that doesn't flow but should still have a nice shine.
Fill a pastry bag fit with a small open tip (#2 or #3 works well, not so small that the icing won't extrude).
Place a small dollop onto the top (very middle) of a large cream puff and place a smaller cream puff on top of the adhesive royal icing.  Continue with the remaining puffs.  I like to pipe fans with the royal icing and let them dry over night.  I then pipe another dollop of royal icing on top of the smallest puff and stand around holding the damn thing until the fan is completely adhered.  It's a pain but well worth the pastry drama.
You can pipe beading around the seams with the icing or leave them bare.  Up to you entirely.
Labels: choux pastry cream