King Cake for Our Queen 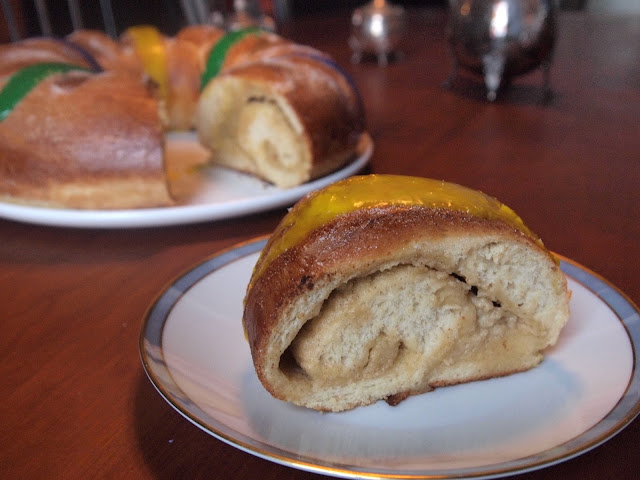 Tallulah the Catahoula came to us by way of Louisiana.  We had not planned on adopting another fur baby.  We'd recently lost our beloved April the Boston Terrier.  We were busy smothering our remaining pups with love.  It seemed callous to bring a new pawed soul into our home so soon after the little one's passing.


But as these things happen, a grey pip squeak managed to squirrel her way into Ray's heart when he happened upon her during his travels in Louisiana.  He had only meant to leave the Bayou State with an LSU t-shirt and a tailgate hangover.  Instead, he brought home a puppy. 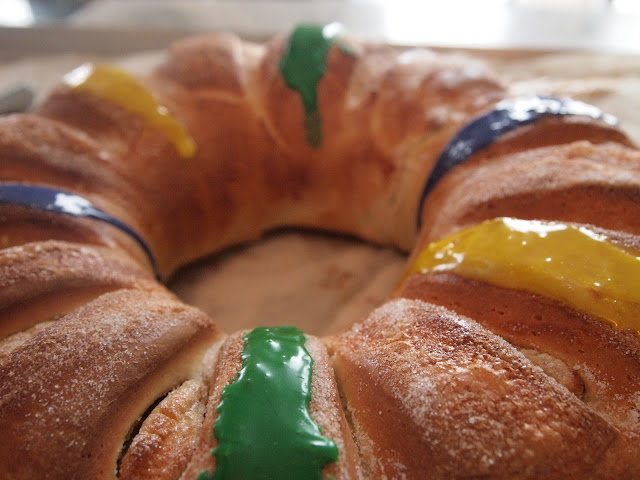 I thank him every day for his foresight and curse him that I love her so that I let her sprawl in the bed next to me, stealing the covers and leaving my toes exposed.

Catahoula's are a Louisiana native.  Their proper name is Catahoula Leopard Cur and they boast a grand lineage, descending from the Spanish Conquistador war dogs who were left behind with the American natives, who then bred them with the local wolf population.  Apparently, they also taught them to like cake and snuggles.

So it's with the pelican state in my heart and Tallulah begging at my feet for some of her hometown cooking that I make the King Cake...and of course I let her choose the first piece.

My recipe is a lush sweet roll, intertwined with bourbon cinnamon laced pastry cream.  It's great any time of the year, not just Epiphany & Mardi Gras.

5 cups bread flour (plus a cup more just in case the dough is too sticky...)
1 tablespoon INSTANT yeast
2 teaspoons salt

2 egg whites, set aside in a small bowl

For the glaze:  1 1/2 cups confectioners sugar, divided among three bowls.  1 - 2 tablespoons of milk per individual bowl and 1 drop dye each of green, yellow and purple in each bowl.  Mix until smooth.

-Make the pastry cream per the directions in this post.  Allow to cool completely.

-Place flour, yeast and salt into the bowl of an electric mixer fit with the dough hook attachment.  Stir the dry ingredients together.

-Mix the dough until it starts to pull from the sides of the bowl and is very shiny.  If the dough is very sticky, slowly add more flour from the extra cup.  The mixing process can take quite a while, up to 15 minutes.  Be patient.


-Bulk proof the dough in a large bowl, spray with non-stick spray, until the dough doubles in size.

-Roll the dough, starting with the long edge closest to you, into a jelly roll.

-Form the jelly roll into a circle, pinching the cut ends together gently.


-Every few inches, make a cut into the top of the cake and brush the entirety with egg white.


-Allow to rise until doubled in size.  Brush again with egg white and sprinkle with granulated sugar.
-Bake for 30-40 minutes, until the crust is golden brown.

-Allow to cool completely.  Hide a pecan in the cake by sticking it gently in one of the cut openings.