Scaaaary Story: Snowballs of the Undead 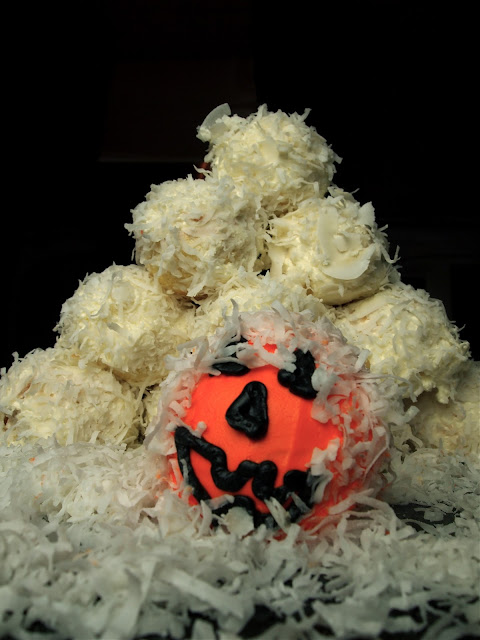 You can have your apparitions, ax murderers and zombies, I've lived through something far more harrowing than the undead chasing me down dead-end alley ways in pursuit of my succulent gray matter.  Oh yes.  I've lived through a living nightmare and survived:

It snowed 6 inches of the white stuff on the 29th of October, 2 whole days before All Hallow's Eve, and covered my artfully carved pumpkins.

I'm not sure I'll ever recover from the shock. 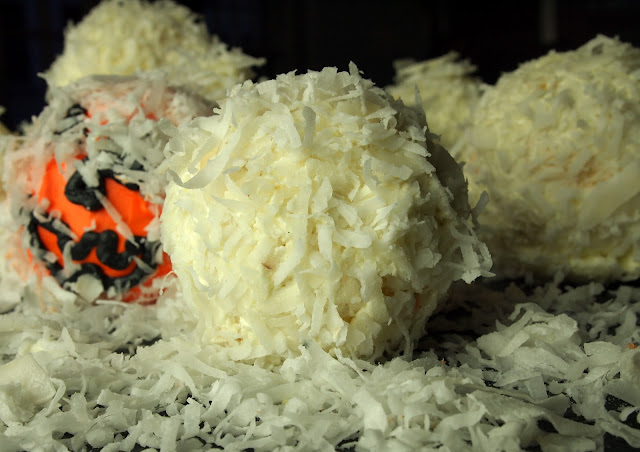 SNOWBALLS OF THE UNDEAD

To help promote recovery from my bloodcurdling experience, I called upon pastry therapy.  And what better sweet to facilitate healing than coconut snowballs filled with dulce de leche.  These puppies should take the edge off the early chill. 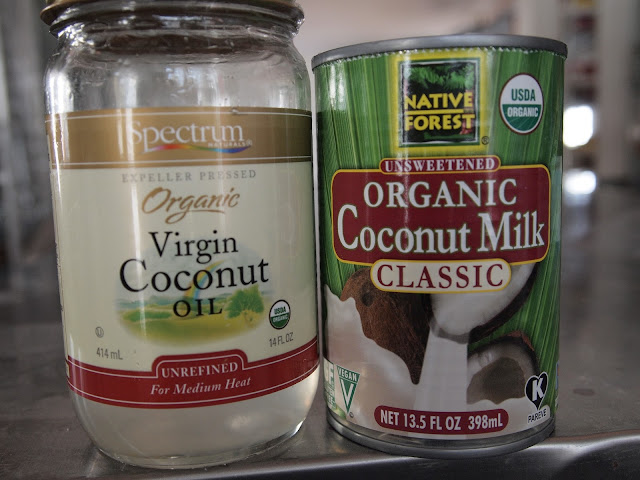 •Place the jar of coconut oil in a pan of simmering water until the oil has melted.  Measure out the oil and combined with the egg yolks and 1 cup of the sugar.

•Whisk together the oil, sugar and egg yolks until combined in a stand mixer.  Add the coconut milk and whisk until just combined

•Sift together the flour, baking powder and salt.  Sift a second time over the mixing bowl with the batter. Using a large rubber spatula, fold in the flour until the batter is smooth. 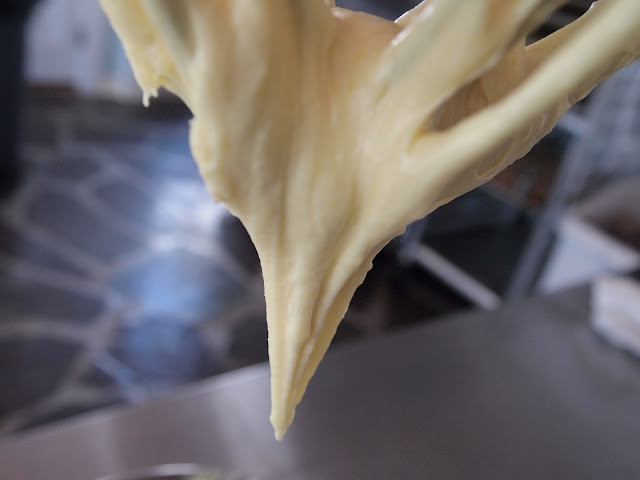 •Transfer the batter to a clean bowl and wash your mixing bowl and whisk attachment until sparkling and squeaky clean!

•Add the egg whites and cream of tartar to the clean stand mixing bowl and whisk until foamy.  Slowly add the remaining 1/2 cup of sugar and whisk on high until you achieve medium-soft peaks. 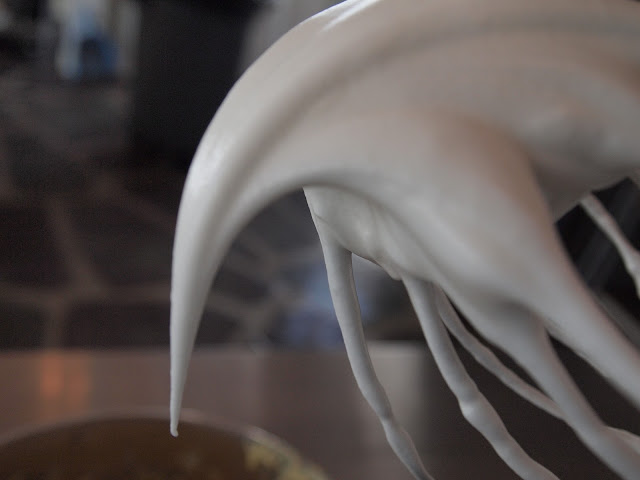 •Transfer 1/3 of the egg whites to the bowl with the batter.  Stir with a rubber spatula until the batter is "lightened" and no streaks of white remain.


•Add remaining egg whites and gently fold the egg whites into the batter until completely combined.

•Spray a silicon dome mold with non-stick cooking spray and dust with flour.  Fill each cavity just a bit more than 3/4 full. 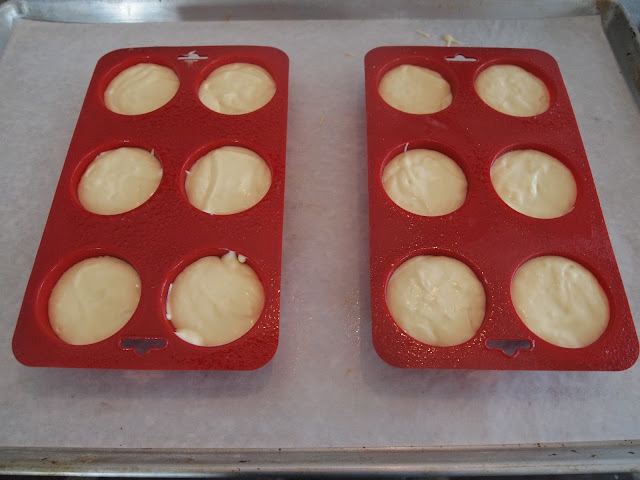 •Bake for 20 minutes or until the cake springs back when gently poked.  Allow to cool completely.

•While the cake is cooling, pour the sweetened condensed milk into a heavy saucepan and stir over medium-low heat with a heat proof rubber spatula CONSTANTLY, until the the condensed milk thickens to the point that it adheres to the spoon and won't easily come off.  Allow to cool.

•Hollow out two half moons of cake and place a large dollop of dulce de leche in the cavity.  Place the two halves together.  Continue with the remaining cake and dulce de leche. 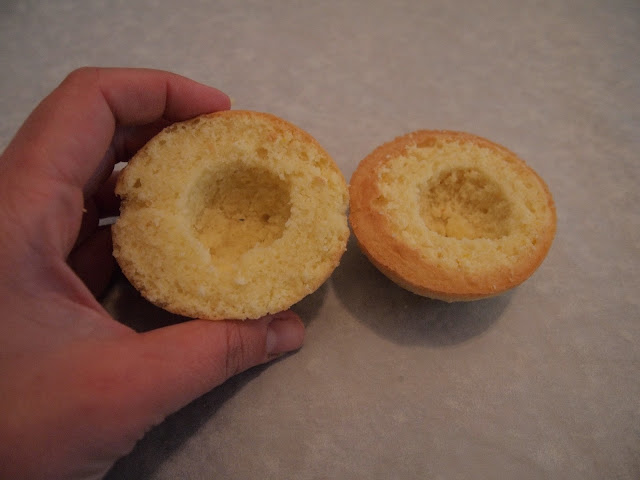 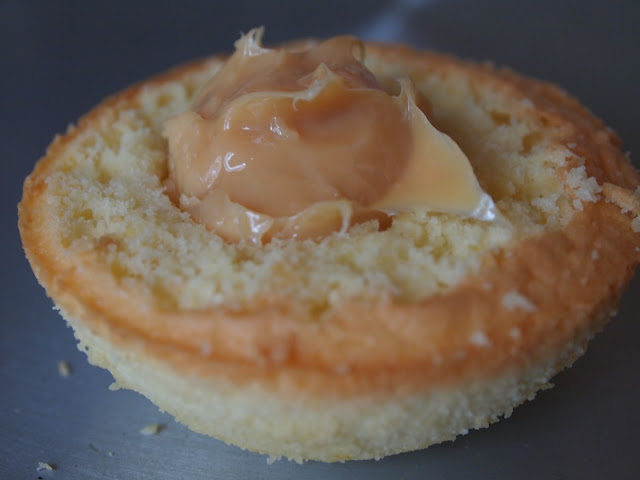 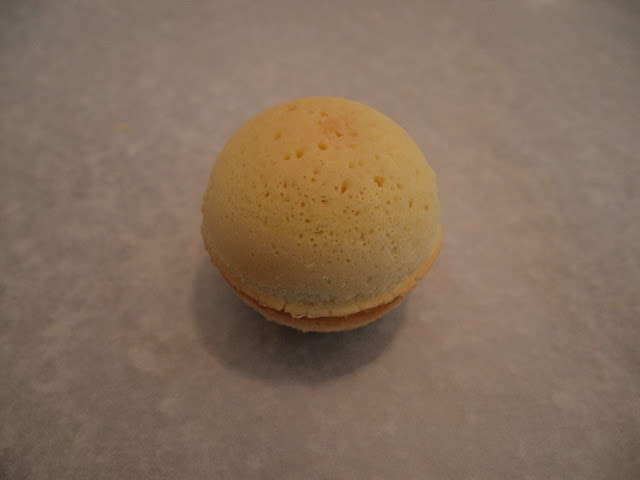 •Using a small offset spatula, cover each cake orb with 2 - 3 tablespoons of buttercream (no need to be persnickety about it, you don't have to smooth the buttercream as you're going to be coating the buttercream with flake coconut.

•Press the coconut flakes in an even layer over the entire cake.

•Serve immediately and pray to the weather gods that we don't get any more snow until WINTER! 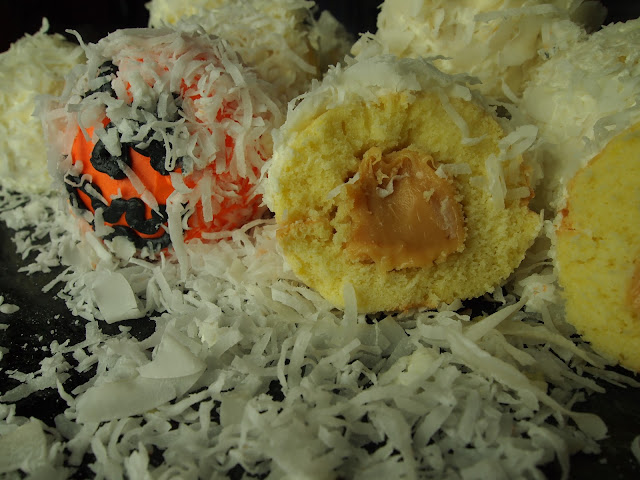