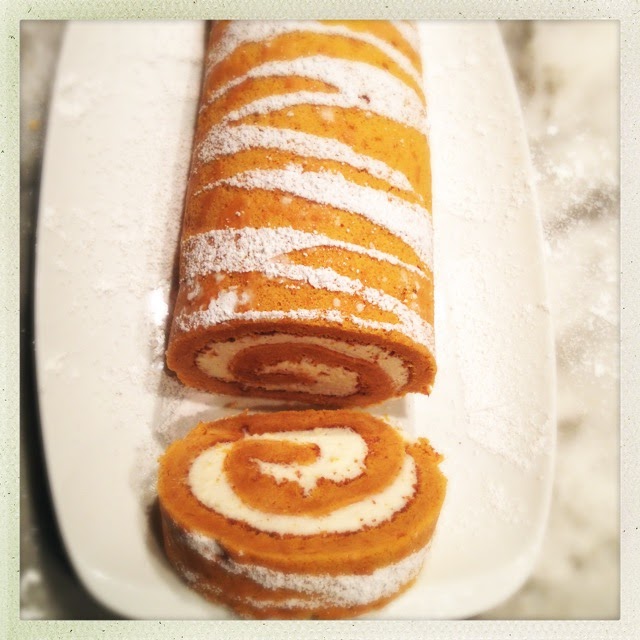 I have sugar pumpkins up the wazoo.  After harvest, they lollygagged as doorstops and exterior quaint decor.  Now those suckers are getting put to good use...in baked goods.  But don't fear, you can use grocery pumpkin puree to the same effect.  It's just not as satisfying.

•Preheat oven to 375º.  Line a half sheet pan with parchment and spray with non-stick cooking spray.  Set aside.

•In a very clean bowl of a stand mixer fit with the whisk attachment, combine the salt and egg whites.  Whisk until light and foamy and slowly add 3/4 cups of the granulated sugar, 1 tablespoon at a time, until the egg whites hold a stiff peak and shiny.  Don't overwhip to the point they they become dry.

•Transfer the whites to a clean metal bowl.

•In the same mixing bowl (you don't have to clean it) add the egg yolks, 1/4 cup of the remaining sugar the maple syrup, pumpkin puree and the creme fraiche.  Whisk until just combined.

•Transfer the batter into the prepared sheet pan and using a large offset spatula, smooth the batter evenly in the pan.

•Bake for 20 to 25 minutes or until the cake springs back when gently poke and just begins to pull away from the sides of the pan.

•Combine all ingredients in the bowl of a stand mixer fit with the whisk attachment.  Start mixing on low until the confectioner's sugar is roughly integrated and then raise to high and continue whisking until smooth.  Cover with plastic wrap and fridge until needed.

•While the cake is hot and right out of the oven, release it from the pan by running a paring knife along the edges and flip the cake out onto a kitchen towel liberally doused with confectioner's sugar.

•Sprinkle the top of the cake with an even layer of confectioner's sugar and roll the cake IN THE TOWEL, starting at the narrower end.  Allow to cool wrapped in the towel.  This keeps the cake from cracking when you ultimately roll with filling.

•Once the cake has cooled, unroll from the towel and spread the filling evenly on the cake.  Roll the cake again...this time, without the towel.  Wrap the roulade in parchment and fridge until set.