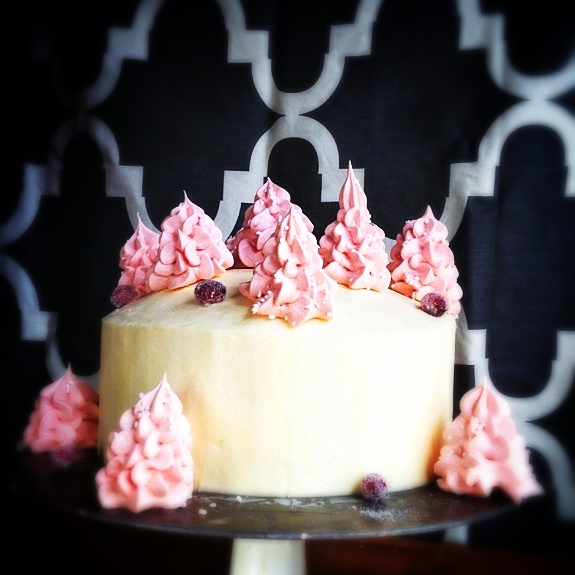 A monkey wearing a bespoke shearling coat and a diaper was snapped shopping at a Toronto Ikea a few days ago.  I believe I know his purpose:  he was on the hunt for lingonberry jam.  I know this because I too have run through an Ikea in a shearling with the same expression pasted on my face.  I skipped the diaper part because I can, although having seen photos of the monkey, I realize that it might have added a certain je ne sais quoi to my ensemble.

Anyway, I was tearing through the store on the hunt for the Swedish food court, hoping beyond hope that lingonberry jam and Anna's spice cookies were still in stock.  I have a thing for those little European cranberries, especially during shearling coat wearing season.

I now hoard enough lingonberry preserves to feed a zoo and the moment I caught site of the sweet little guy on the hunt for Christmas berry cheer, I had to make him a cake.  And with his adorable fashion sense and love of the ruby berry, I thought he might like a berry hued holiday themed treat.  This is for you Ikea Monkey.  I hope you got your lingonberry jam. 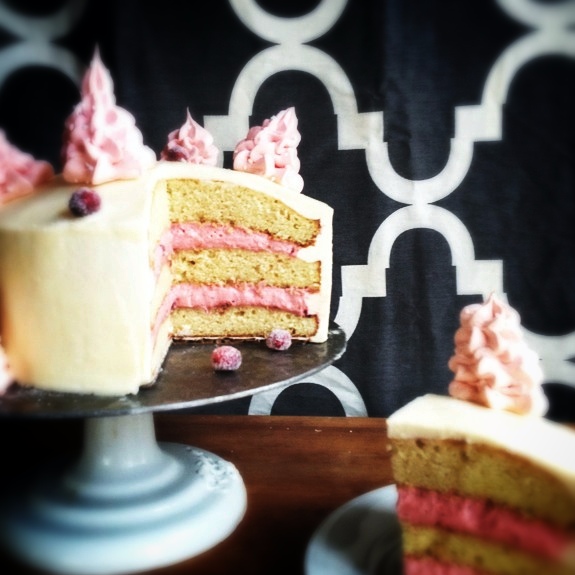 This cake uses the exact recipe of the Vanilla Tea Cake (that took me eight years to post so I figured I'd get some monkey mileage out of it).   I divide the batter among three 9" cake pans that have been lined with parchment rounds and sprayed with non-stick cooking spray.  I bake at 350º for 20 to 25 minutes or until the top is golden brown and springs back when gently poked.  This cake domes, even when baked on a stone or lined with cake strips, so I just go with the dome instead of leveling it.  I also love this batter for tiered cakes as it's dense enough to stand up to high stacking yet incredibly moist and delectable.  It's also great in a large bundt but has to be baked for over an hour at 350º and it's best to poke with a cake tester to check that it's done.

For the Lingonberry Diplomat Cream Filling

For the Italian buttercream 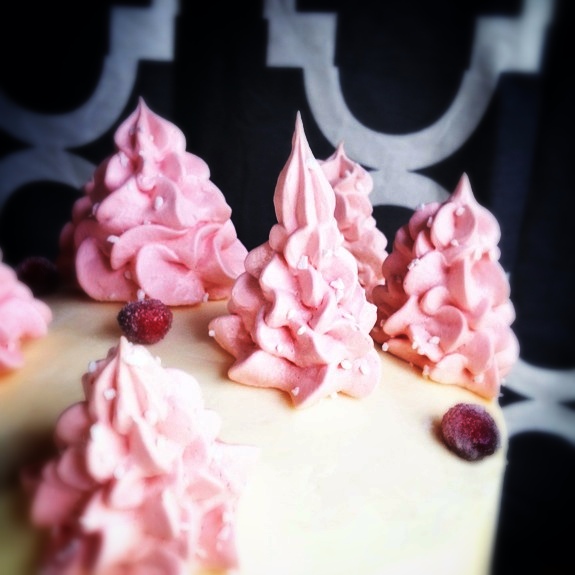 For the candied lingonberries (or cranberries)

•Combine the sugar and water in a saucepan and simmer until the sugar is completely melted.  Allow to cool.

•Puncture each berry with a needle and place in the syrup to soak overnight.

•Take the berries out and allow them to drain on a parchment lined sheet pan for at least 20 minutes.  Roll in superfine sugar to just coat.

For the meringue trees

•Preheat your oven to 225º.  Line a sheet pan with parchment.

•In the bowl of a stand mixer fit with the whisk attachment, combine the egg whites and salt.

•Whisk together the sugar and cornstarch in a small bowl.

•Whisk the egg whites until foamy and slowly add the sugar mixture (I count to 10 for every tablespoon).

•Once the egg whites achieve stiff white, shiny peaks, add the food coloring and mix until well saturated with color.

•Transfer the meringue to a large pastry bag fit with a large star tip.  Pipe a large star to start and turn your tip 45 degrees and pipe a slightly smaller star on top of the first.  Continue turning and piping about 5 times and end by stopping the pipe and pulling straight up to create a lovely peak.  Continue piping little trees (of varying sizes), sprinkle with Swedish sugar and bake for 2 hours or until the meringues are dried out.  Allow to cool.

For the Lingonberry Diplomat Cream filling

(***NOTE***Diplomat cream is simply a pastry cream that's been lightened with whipped cream.  You can either use it with just the whipped cream or you can stabilize it with gelatin.  You use it plain, without gelatin, if you're filling cream puffs or eclairs.  It's best to stabilize when the cream needs to hold it's shape, as when you use it in a Napoleon or a layer cake)

•In the bowl of a stand mixer fit with the whisk attachment, whisk together the egg yolks, sugar, cornstarch and salt until smooth.

•Bring the half and half to a simmer in a saucepan.  Slowly pour the simmering half and half down the side of the bowl and into the whisking egg yolk mixture until completely added.

•Transfer the mixture back into a heatproof metal bowl, scraping the bottom of the mixing bowl to get any errant cornstarch clinging to the bottom.  Fill the saucepan you've just used half way up with water and bring to a simmer.  Place the metal bowl with the custard over the simmering water and whisk until the mixture thickens to the consistency of mayo (this can take a LONG time, minutes and minutes, be patient).  Stir in the lingonberry preserves.  Place a piece of plastic wrap over the custard so that it touches the exposed custard (otherwise it will form a skin) and refrigerate until cool, at least 2 hours or overnight.

***Before you go on to the next step, make sure your cake layers are cool and your buttercream is ready***

•Pour the 1/8 cup of water in a small, microwaveable bowl and sprinkle the gelatin in an even layer over the water.  Allow to sit until the gelatin look completely saturated with water.  Nuke on 50% power for 10 seconds at a time, swirling the bowl in between blasts, until the gelatin is completely melted.  Allow the gelatin to cool just a little but not so much that it starts to harden.   If it's too hot, it will start to sieze in small chunks if you add the cool cream mixture to it.

•Whisk the heavy cream until you achieve stiff peaks.

•See the note above about baking the Vanilla Tea Cake in cake pans.

For the Italian Buttercream

•In a saucepan, combine the sugar, water and lemon juice.  Stir over low heat until the sugar is completely melted.  Use a damp pastry brush to brush down any sugar crystals clinging to the sides of the pan so they fall back into the pan.  Attach a candy thermometer and bring the sugar syrup to 234º.

•While the sugar is coming to temperature, combine the egg whites and salt in the clean bowl of a stand mixer fit with the whisk attachment.  Whisk until white and foamy and slowly pour the hot sugar into the whisking egg whites by first pouring the sugar down the side of the bowl so it slowly incorporates into the egg whites (if this makes you nervous, transfer the sugar to a heat proof pitcher with a spout).  Whisk until the meringue achieves stiff white peaks and the bowl is cool to the touch.  Add the butter, very small pieces at a time.  Continue whisking until the buttercream comes together as a smooth icing (it may look curdled and awful at first but that just means that you're doing it right and it will smooth out soon).

•Place a cake layer, dome up, on a cake round (making sure to remove the parchment).  Brush the layer with lingonberry preserves.

•Place 1/3 of the buttercream in a large pastry bag fit with a large open tip.  Pipe a bead of buttercream along the inside edge of the cake to create a dam for the filling.

•Place 1/2 of the filling inside the buttercream dam and top with another layer of cake, dome side up.  Brush the second layer with preserves, piping a dam and spreading out the remaining filling.  Top with the last layer and brush the remaining preserves on the top cake layer.  (If you have a tall cake ring, you can build the cake inside the ring for better stability).  Wrap the cake tightly in plastic wrap and allow to set in the freezer, about an hour.

•Spread a crumb coat on the cake and refrigerate for 20 minutes to set.

•Spread the cake with a smooth finishing coat of buttercream and then top with meringue trees and sprinkle the candied berries willy nilly atop the cake.