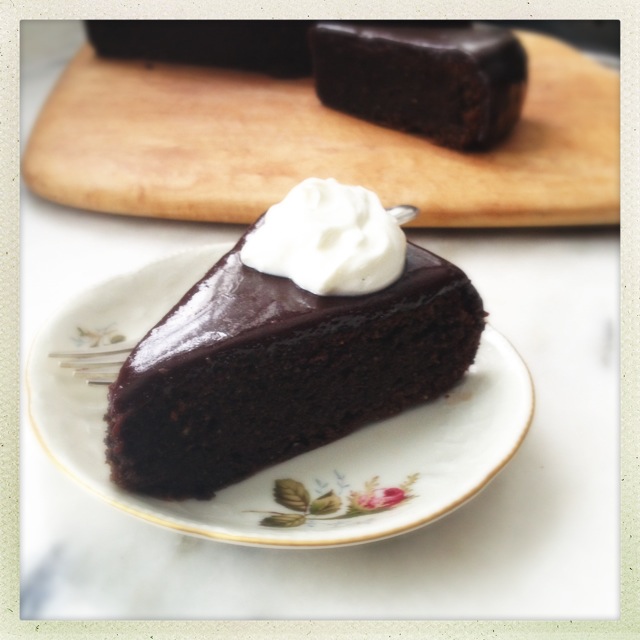 The Sachertorte has been the subject of controversy and legal wrangling for decades.  Nay, CENTURIES!  Two venerable Viennese establishments, Demel and Hotel Sacher, claim to have been the birthplace of the chocolate cake.  Hotel Sacher has the legal right to call their version, a cake with two layers of a chocolate sponge hybrid cake layered in apricot preserves and topped with shiny glaze, the ORIGINAL Sacher.  Demel, with their single layer of cake and single coating of apricot preserves all topped with the same chocolate glaze, must identify their cake as the Demel Sacher.

I love both versions.  I'm not choosing sides.  I'm also not courting their legal ire so instead of sharing MY Sacher recipe, I'm going to give you a variation I've created on the cake that utilizes hazelnut flour and Nutella to add a lovely toasted and smooth flavor to the cake batter while keeping the shiny glaze that makes the Sacher so beautiful (and delicious).  I've also stuck with Demel's single layer, just to keep things simple. 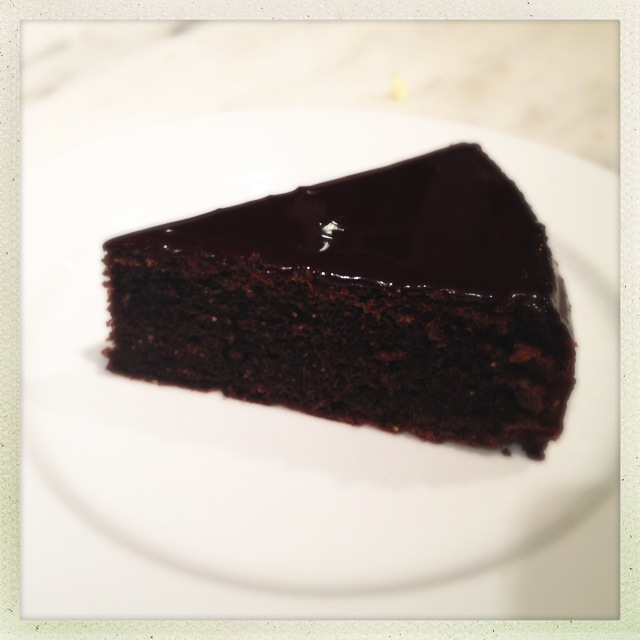 •Preheat oven to 375º.  Line the bottom of a 10" cake pan or springform with parchment and spray with non-stick cooking spray.  Set aside.

•In the bowl of a food processor fit with the blade attachment, combine the hazelnut flour, AP flour and cocoa.  Pulse until combined.  Set aside

•In the bowl of a stand mixer fit with the paddle attachment, cream together the butter and half the confectioner's sugar until light and fluffy, about 5 minutes.

•Combine the egg yolks and whole egg in a heat proof bowl and whisk over a bain marie until the mixture reaches 84º.

•Slowly add the eggs to the creamed mixture until entirely combined.  Add the Nutella and mix until combined.

***NOTE:  This method of mixing is called a combination method.  It employs both creaming  AND a foam method, hence...combination.  You get the aeration of the creaming and the aeration in the stable meringue foam. ***

•Transfer this batter to a clean bowl and wash the mixer bowl very well.  Dry completely.  Combine the egg whites, salt and cream of tartar in the bowl and whisk on medium with the whisk attachment until white and foamy.  Slowly add the remaining confectioner's sugar and continue whisking on medium high until medium stiff, white peaks form.

•Add 1/3 of the egg white mixture to the batter to lighten (you needn't be overly gentle).  Add the remaining egg whites and gently fold into the batter.  Fold in the dry ingredients.  Immediately spread the batter in the prepared pan and bake for 45 minutes or until the cake feels firm in the middle.

•Allow to rest for 5 minutes.

•While the cake is still warm, take a paring knife and run along the edge of the cake pan to release.  Turn the cake out onto  a cardboard round the exact size of the cake or a little smaller and remove the parchment, keeping  the top side down.  Spread the fig preserves over the top (once the bottom) of the cake and along the sides, removing any large chunks of fruit.

•Place the cake on a stable jar that's smaller than the cake but still large enough to provide a stable foundation for the cake.  Place over a parchment lined sheet pan.

•Combine all ingredients in a heavy sauce pan and stir until the sugar, chocolate and butter have completely melted.  Attach a candy thermometer and heat to soft ball (234º).  Allow the bubbles to subside and carefully pour the glaze over the top of the cake.  DO NOT TOUCH THE GLAZE.  DO NOT TRY TO SPREAD THE GLAZE.  Let gravity do its job and DO NOT SCRAPE THE PAN!  This is going to sound strange but spray a pair of scissors with non-stick cooking spray and cut where the glaze is dangling.  Eat the trimmings.

•Allow the cake to sit at room temperature to set, about an hour.  You can place the cake in a large Tupperware with secure lid, making sure nothing touches the glaze, and refrigerate up to a week.  Serve with lightly sweetened whipped cream.  I cut the cake with a very hot knife to keep the edges of the glaze clean.