If you keep up with my forays into gentlewoman farming, you're well acquainted with my adventures with water fowl.

I first became conversant in duck and goose after Super Storm Irene devastated our nook of Vermont.  A local farm was all but wiped out and I volunteered to foster their flock of geese and ducks until they could make the necessary repairs to take them back.  I had them for a year.


Despite the fact that my feathered foster children became hormonal hellions once spring came around, I stockpiled some of their eggs in anticipation of their leaving me.  I liked the little stinkers.  I wanted some of my very own.  At least the ducks.

Hatch rates in the incubator are low.  I took the percentages into account and put 20+ duck eggs in the hopper, assuming that approximately half would hatch.  And I put in about 10 goose eggs for a friend who was interested in taking them on.

They all hatched but 4.  And then my friend realized that it was a terrible time to take on the birds, so I kept the geese.  So it came to be that I had more birds than I had ever intended keeping.  All of those newborns on top of our brood of chickens.


They were lovely creatures in the beginning.  Then spring came.  My husband, Ray, warned me.  Just because I'd pulled them from their shells and raised them by hand didn't mean they wouldn't turn our backyard into Game of Thrones.  And despite my concerted efforts to find new homes for my overabundance of drakes and ganders throughout the winter in anticipation of the havoc spring would bring (optimally, any flock should be comprised primarily of hens and very few boys), we entered into the mating season with too many.  Too many of everything.

Drakes and ganders dueled for mating rights, gouging at each other until they became bloody.  Hens got abused left and right by overeager men folk.  Yes, I'm speaking in high euphemism right now.  There were fatalities and not a few maimings (Mama, the goose, lost sight in one eye).  I spent my days running round in circles, caging injured males and separating them from the flock in the "infirmary."

One girl in particular, a white swan variety who had always displayed an uncommonly gentle mien for a goose, became helplessly broody.  In the bird world, that means you become filled with the desire to sit on a pile of eggs until they hatch.  For weeks.  Rarely getting up to eat or drink or bathe.  The state of broodiness is often described as being locked in an extended opium haze.  No matter the chaos, everything is chill to the broody hen.  Even when a gang of ganders "bothers" you until your head is bloody, you won't move from your charge of protecting your potential babies.

My sweet broody girl became injured from all the attention, her eye swollen shut and bloody.  I stopped my campaign to control my birds.  I broke the huge flock into smaller pods and enlisted friends to help me find new forever homes.  Within a few days, every one of my water birds had a new home.  Except for my gentle lady goose.  I kept her with me.

Mama, as I came to call her, stayed broody for months after.  Anything resembling an egg she'd nudge into her nest and she'd sit on it.  Thank goodness, nothing came of it.

Once she broke out of her brood, she got lonely.  She'd sidle up to the foraging chickens, trying to blend in like she was one of the gang.  Mr. Spice, the lone rooster, charged at her, kicking her out of the  hen klatch.

This led me to do the unthinkable.  I considered getting more water fowl to keep her company.  But instead of hatching out a bevy of available eggs on my own, I turned to the internet.  Instead of getting geese as feathered friends, I looked to smaller and gentler breeds of ducks.  While I loved the Indian Runner ducks I'd been raising for their beauty and comic value (they look like billed bowling pins), they are painfully nervous and skittish.  Exactly what Mama didn't need.  What I really needed was the gentlest of animals.  Dare I say, I wanted the "stoners" of the fowl world; relaxed and friendly critters who would be happy hanging with my high strung Mama Goose.


I decided upon four Welsh Harlequin hens.  Anyone who's raised them falls in love.  They are friendly and calm.  They are prodigious egg layers.  They are pretty.


They came in the mail today.

We picked them up from the post office.  I released them into their temporary cage inside the house. They ate, drank and peeped with gusto.


Mama heard them immediately.  She stood at the door and honked relentlessly.  When I opened it, she peaked in. 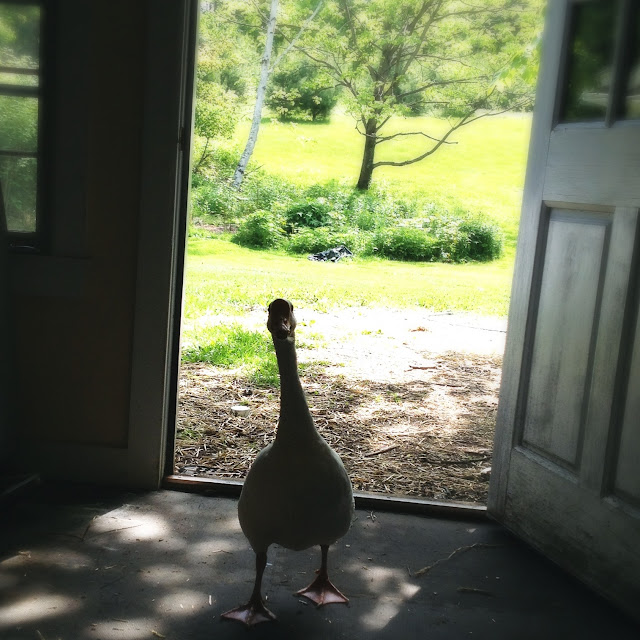 And then, for the first time in her adult life, she bravely walked inside the house and into the brooding room.  She stood at the cage with the ducklings and inspected, all the while leaning against me gently.  We sat like this for a half hour, watching fluffy nubbins doing boring stuff like drinking water and nibbling feed.  But it was anything but boring.  My gentle, broody Mama now had a family.  A flock of little ladies I hope she'll raise as her own.