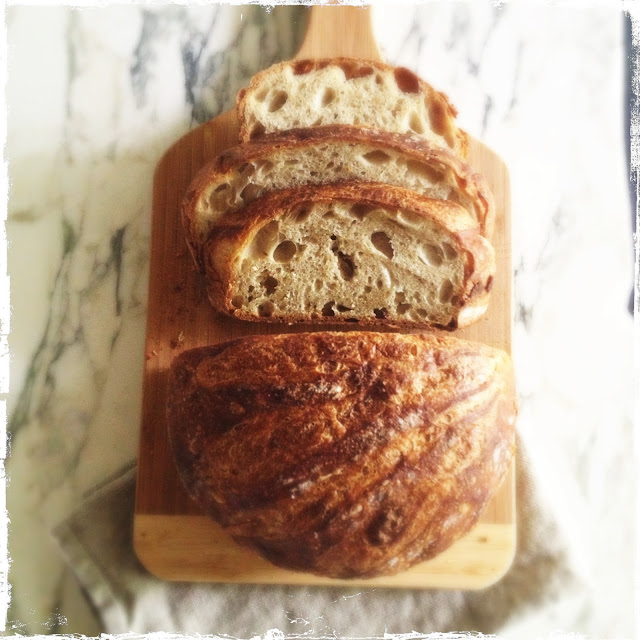 We brew our own beer here at Freegrace.  IPAs, double IPAs, Pilsners, Rye beer, Hefeweizen.
You name it, we'll ferment and bottle it.  We're even growing hops to contribute to our brew.

For those of you not familiar with brewing terminology, trub is the spent yeast sludge left over from the first fermentation.  We siphon off the beer-to-be into a big bottle called a "carboy," being careful to leave the trub that's settled to the bottom of our first fermentation tub behind.

It's that spent yeast filled sediment that's full of hoppy, beery flavor that I've failed to bottle into a starter for bread...
until now.

A few days ago, I took a deep whiff of the sad yeast slurry left behind, just waiting to be tossed.
The aroma was achingly delicious, begging to be harnessed into something more.

I saved 200 grams of the trub and started to feed it.  For three days, I fed my little trub two 100% hydration meals (equal amounts in weight of flour and water) a day until it bubbled to my satisfaction.  I fed it a mixture of both whole wheat and high gluten flours, the whole wheat providing a real kick in the pants for the yeast to thrive.  If I'd been a patient baker, I'd have stayed on this feeding schedule, creating a truly viable sourdough starter and waiting a few weeks to use the stuff.  But I wondered whether I might lose some of the hoppy undertones I was hoping to cultivate in the bread if I waited that long.

I compromised.  In the name of science, of course.  I used 200 grams of the trub starter while it still clung to its olfactory beer ancestry to make a few loaves, adding a "spike" of instant yeast to insure a decent rise.

My goodness, I'm so glad I'm impatient sometimes.  What a wonderful bread.  It's flavorful without being overwhelming.  It's clung to the best of the brew while keeping what's so glorious about artisan bread:  a thin and crispy crust, a gloriously open and chewy crumb, lovely color and a lingering finish. 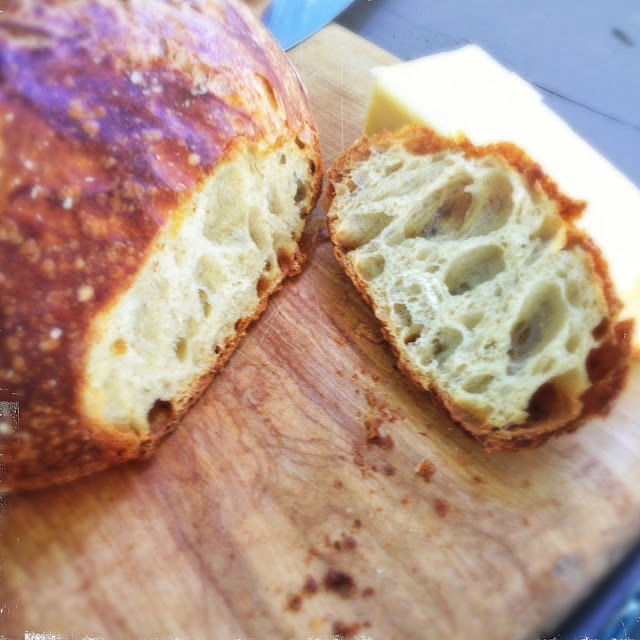 I'll continue on a regular feed schedule with the remaining trub and I'll bake another batch without spiking the dough to see whether that wonderful hoppy flavor still lingers.  If it doesn't, no big deal.   I'll have yet another lovely sourdough starter and an excuse for us to brew another batch of beer.

You'll need at least ONE Dutch oven a la Le Creuset for this recipe.

-First feed:  stir together all the ingredients in a large tub.  Cover loosely with plastic wrap and allow to sit at room temperature.
-Second feed:  discard half of the starter.  Weigh the remaining starter.  Feed the starter its weight in equal parts flour and water.  I.e., if your starter now weights 600g, feed it 300 g of flour (you can continue with the same ratio as above) and 300g water.
-Continue feeding twice a day until your starter is nice and bubbly but still holds on to its distinct "brew" aroma.    I went through 5 feedings before baking my first batch.

-In a large bowl, combine the trub starter, the flour and the water.  Stir until all the flour looks saturated.  You aren't "kneading" per se, simply give the mixture a hearty enough stir that the the ingredients are well combined.  Allow to sit for at least 20 minutes up to an hour.  This is autolyse, a process in which gluten is developed simply by allowing the water to saturate the flour before adding salt or yeast.  In this case, I added the starter since it's high in moisture and won't inhibit the gluten formation like a dry yeast would.  Autolyse allows you to mix less and helps preserve flavor and color that are lost form over mixing and the resultant oxidation.

-Sprinkle the salt and instant yeast evenly over the mixture.  Pull one edge of the dough up, as high as you might without it breaking and fold it over the entire mass.  Continue around the entire mass of dough, pulling and folding until you've made a full circle.  Once you've finished a full "circle" of pulling and folding, use your thumb and index finger as pincers to inch along the body of the dough in a cutting motion.  Continue like this, pulling and folding and "pincing" for a minute.  Allow the dough to rest for 10 minutes and continue this procedure of pulling, folding and pinching for another 30 seconds.  This is a relatively wet dough.  Don't worry about it.

-Allow the dough to bulk preferment for 2 hours, covered, on your kitchen countertop.

-After the 2 hours, gently turn the dough out onto a floured work surface.  Use a bowl scraper to get all that sticky dough out of the container.  Divide the dough in two. Gently pre-form the two pieces of dough into loose rounds, gently degassing the dough.  Don't pound it down harshly.  You want to keep a decent amount of volume in the bread.  Cover the pieces and allow to rest for 20 minutes.

-Shape each dough round into a slightly tighter ball, using the sides of your hands to gently cradle the dough and tighten the mound to create a seam underneath by gently rolling the dough along your floured surface.  Click HERE for a beautiful shaping demonstration from King Arthur Flour's Master Baker, Jeffrey Hamelman.  The round shaping portion is the first up but it's all worth watching.

-Cover the shaped loves with plastic wrap and allow to proof for an hour.

-While the bread is proofing, preheat your oven to 425º.  Place your dutch oven, lid on, in the oven to preheat as well (even better if you have two!).

-Once the bread has proofed, carefully remove the dutch oven from the heat and take off the lid.  CAREFULLY place your loaf into the dutch oven, seam side down.  I repeat, BE VERY CAREFUL not to touch the sides of the hot Dutch oven.

-Using a razor or terribly sharp knife, score the top of the bread from edge to edge.  You can get fancy but it's a tight space in which to score and the more time you take, the more heat you lose and the more likely you'll burn your hands on the Dutch oven.  If you only have one Dutch oven, when you shape your final loaves, place them on a lightly floured, parchment lined sheet pan.  If your kitchen is on the cool side, leave your second loaf covered on the counter top.  If it runs hot, place in the fridge, covered, during the first bake.