FREEGRACE FRIDAY! A pantry: He did it for love

Welcome to a new Friday Feature at GBakes:  Freegrace Fridays!  I'll be sharing stories of our adventures of restoring and working in our 1790s tavern and farm. 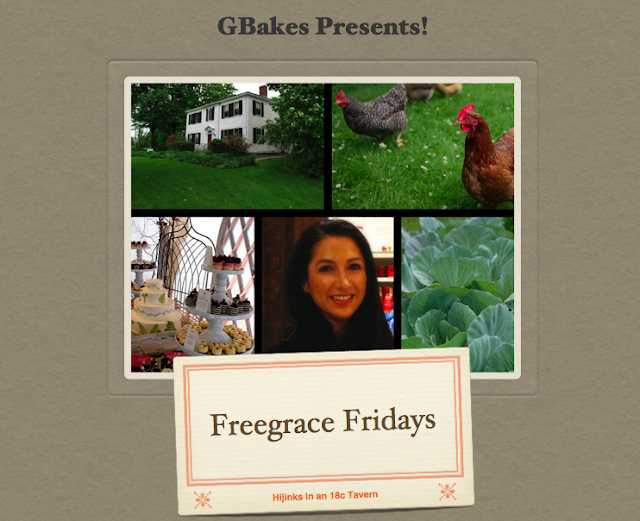 We live in an ancient tavern.  It was built in 1794. The tavern sits on what was once a working farm, which includes acres of land, an ancient barn, a milk shed, a corn crib and a stable. And whisky barrels.  They used to brew whisky here during the war of 1812.  We've not found any whisky yet but don't think we aren't looking.

When we bought the house and property, it was pretty much as it appeared 100 years ago, give or take a few layers of wallpaper and internal plumbing.


Upon taking possession, we tackled the attached carriage house.  The tavern was also a stagecoach stop.  The coaches needed a place to trundle through to drop off the passengers and that was where the carriage house came in.  We turned it into my commercial bakery.  We had the house re-roofed and painted inside and out.  During the repaint, our painters found that the porch attached to the el was rotting.  We had to rebuild the porch.  Then we took on the residential kitchen and other repairs both cosmetic and structurally crucial.

But nothing compares to the pantry/attached bath reno that we just finished.  Is it because this was a project we took on all by ourselves, save the plumbing?  Is it because it was a project that was begun as a lark on my part ("Hey, Ray  Let's tear down some of the ceiling to see if the old beams run through!") only to turn into a pit of despair?  Is it because it's the most recently finished, therefore our new favorite?  Yes, Yes and YES!

When we first saw the house, there was a lone woman babysitting the place.  The main house was shut down, pipes drained and windows sealed. She lived exclusively in the el which comprises the residential kitchen, an attached sitting room/pantry and bath comprising the downstairs.  The sleeping quarters were on the upper level of the el.  She had a few cats.  She may or may not have had a life size nutcracker soldier in the bedroom.

A few years passed without our having touched either room but for a coat of paint.  We parked our gargantuan sleeper sofa in the room, right across from the t.v.  I refused to use the attached bathroom.  I kept threatening to tear down the sagging ceiling in both rooms.

I caught Ray in a vulnerable moment.  I got him to punch a hole in that forsaken ceiling.  I saw beams.  I saw an opportunity to press my case for turning the "t.v. room" into a proper pantry that could absorb all the kitchen overflow.  When your life and living is centered around baking and cooking, you manage to collect all manner of gadgets and wares.


Ray saw work and trouble ahead.

It took us 6 months to make a move.  We just kept staring at the hole.

As if by magic, one day we both found the motivation to face the hole.  Ray's motivation surpassed mine, it extended into the bathroom.  Thank goodness it did.  It would have taken a few showers more and the floor would have collapsed.


A few more flushes and the flushee would have taken a trip to the basement on the porcelain throne.


Ray had to replace each supporting beam.  By himself.  He had a mantra during this stage of the reno.  He'd be balancing a 100 lb beam on his back while screwing it into the steel joist hangers and he'd repeat, "Why am I doing this?  FOR LOVE?"  He muttered and at times he'd yell.  But always, "Why am I doing this?  FOR LOVE?"  I may have reminded him that the bathroom was his idea.  This might not have helped matters.


He rebuilt the floor over the joists.  He rebuilt the shower, the sloping pan and all.  As he was putting in the studs, I suggested that while he was at it, he should create a built-in "box" in the shower to hold all the essentials.  We (that is he) was going through all the trouble of building a custom shower, "we" really shouldn't skimp on the essentials.

I left him to his work in the shower.  Ten minutes later, I swear I heard strains of our new theme song, 'Why am I doing this?  For LOVE?"  But he did it, he built the shower nook.  He did it for love.  And for easy access to soap and shampoo.

In the meantime, I researched tile.  I discovered something I already knew.  I have expensive taste.  If you haven't already guessed, the very reason we (i.e. Ray) were doing this ourselves was to save money.  If I indulged my tile whimsy, we'd be screwed.

For the hell of it, I went onto Craig's List.  I typed "12-inch x 24-inch black slate tile" into the search box.  It certainly wasn't going to hurt to look.  And there it was!  In Manchester, New Hampshire.  Someone had BOXES of my fantasy tile and they were selling it for nothing!  That they were probably selling it out of the back of a van didn't concern me.  I just wanted my tile.

It did occur to me as we were heading off onto the Manchester exit that buying tile out of the back of a van might not be the worst case scenario.  Any worst case scenario always includes a van but it also includes scenes from "Silence of the Lambs" with a gentleman named Buffalo Bill.

I wrote frantic emails to family and friends that if I didn't email them after 1:15, to call the police and tell them we'd been kidnapped by tile impostors.

We drove away from a lovely gentleman's home, tile in the back of the truck.  No vans entered into the transaction.  I started laying tile that evening.  That's right.  I did all the tiling.  Ray had to mix all of my mortar and grout, though.  I always get the fun jobs. 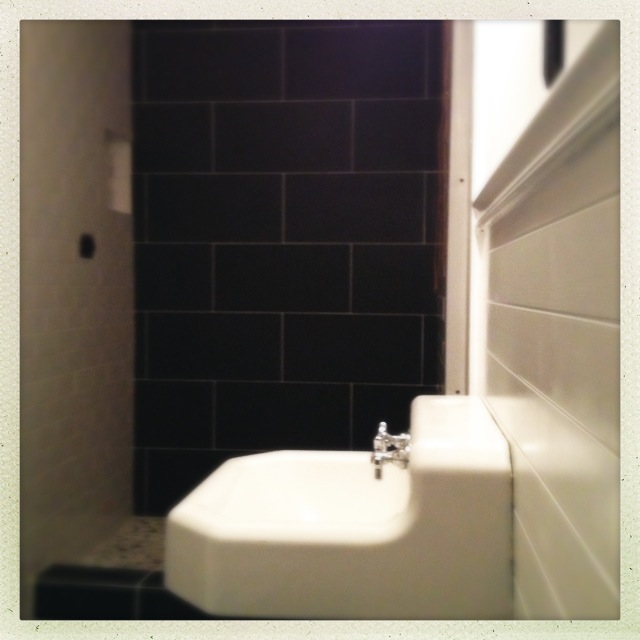 With the bathroom finished, the pantry was quick work.  Ray rebuilt the walls but for the one where we'd discovered ancient barn board.  We agreed that we needed to keep it exposed.  That decision wasn't based at all on the fact that it would mean less work.  Not one bit.

Ray had the brilliant idea NOT to drywall between the very ceiling beams that started it all.  Instead, he suggested we use burlap coffee bean bags from our roaster, Vermont Artisan Coffee, to give the room a wabi sabi feel.  We'd cover the insulation, we'd leave the beams exposed AND we'd get a one-of-a-kind look.  Win-Win!  Again, don't think for a moment that we chose this method based on ease of installation versus drywalling. Or the fact that the materials were free.  Nope.  Not at all.

We painted the floor.

Ray installed the pantry sink.  He kept asking me, "Are you sure you want to use this?" I was hell bent on using a cupboard and a random marble sink that had both been in the barn when we bought the house.  I insisted.  It was free.  No Craig's List needed.  Not on the sink, anyway.

Did I mention I have expensive taste in countertops?  I took to the Craig's List search engine, "4 foot marble countertop."  I needed an island for my new pantry.  I wanted it marble and I wanted it CHEAP!

You're not going to believe this but we were off to Manchester again!

This time, I wrote my "In the event we don't email you back by 1:30pm, we've been kidnapped via Craigslist.com.  Call the police." email to friends and family before we left the house to pick up the marble slab.

Marble base safely in the back of the truck, we left the lovely lady's house in Manchester and I told Ray what I envisioned him building as a base for our newly acquired marble.