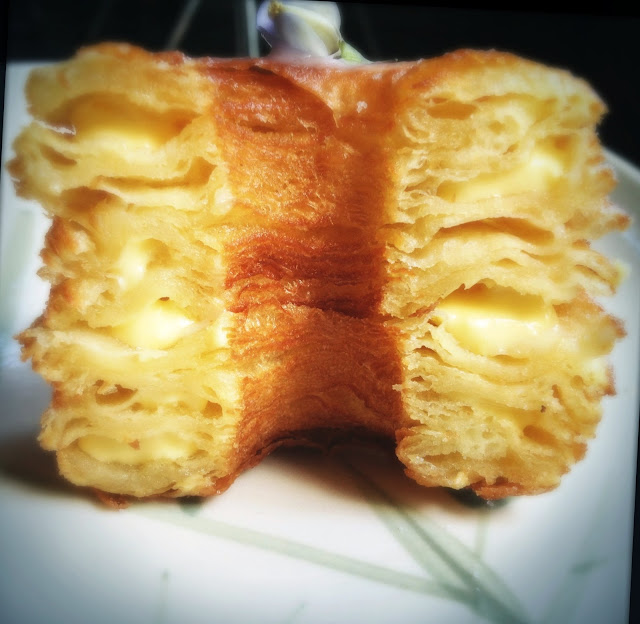 ***ALERT!  For those looking for a "baked cronut," that would simply be a croissant...only cut into a donut shape.****

I inherited all of my mother's recipes.  I have every one of her cookbooks.  I have her recipe boxes, crammed with recipes both handwritten and Xeroxed.  And I have...me, her bun that popped out of the oven with her genetic pastry map neatly etched into my DNA.

It shouldn't surprise me anymore that whatever project I find engaging, she'd already mastered it in the '80s.  I find evidence of my lack of originality on a regular basis.  The other day I was cleaning out our brew room at Freegrace.  I have a stack of my mother's cookbooks sitting across from our beer siphons and kegs.  I grabbed a few to arrange them properly on the shelf and out dropped a manila envelope.  It was addressed to her.  The return address was from the American Brew Society.  You can't make this stuff up.  She'd been brewing beer and she never told me.

I called my dad and he confirmed that she set up a distillery in the basement when I was in college.

Of all the times to hide a beer from me.


It's taken me a while to poke through her recipe boxes since she's passed.  The sight of her handwriting brings on a maudlin weep fest.  Her handwriting combined with her love of the things that I hold dear, like laminated doughs and brewing, make me apoplectic and whiny. At every turn, she's pointing to what is written in our combined hearts.  I am my mother's daughter.

But I still want her here with me, making croissant and danish.  I want her guiding me as I'm fully engaged in playing with butter and flour, all the while fussing at my disdain for washing the crusty dishes.  I want to share a nice coffee with her as we sample our baked experiments.  I want to reverse engineer a damn Cronut with her, so we can exclaim together "OURS IS BETTER!"  Because we  WOULD bake it better and we'd say so.  With exclamation points (and with a German accent)!!!

For quite some time, I've wanted to share my Danish recipe with you.  I've also wanted to dive into Mutti's recipes (that's what a German girl calls her Mama) and share them as well.  As it happens, the first thing I grabbed from her treasure trove was Wienerbrød.  Translated from the Danish:  Viennese Bread.  Translated fully into English:  Danish.  That is, the Danish call Danish, the pastry, Viennese bread.  We call Viennese Bread, Danish. 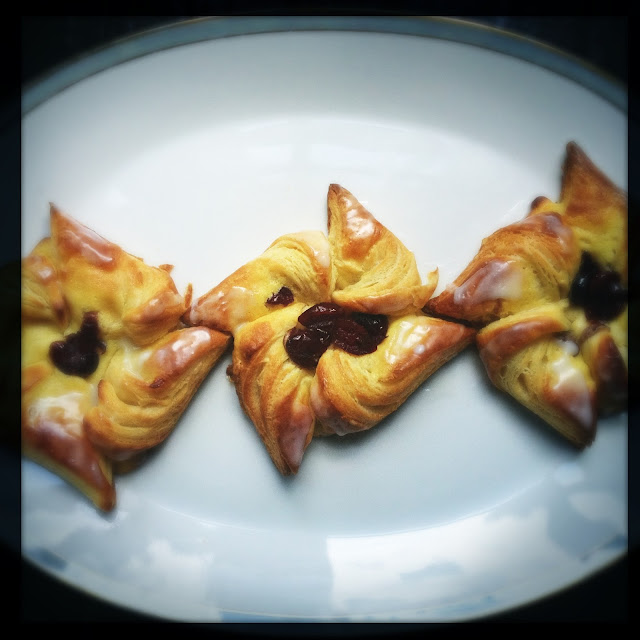 Bottom line, I found my mom's Danish recipe and I wanted to share it.  It also occurred to me that everyone's trying to figure out how the hell to make Cronuts, that fried croissant-ish donut hybrid so popular in New York at the moment.  From the moment the Cronut squawking started, I hearkened back to the Fry Daddy I was experimenting with in my pastry shop and all the things I threw into it, from croissant dough to brioche.  I also threw in Danish dough and it outshone fried croissant by a mile.  It's a richer dough, more akin to what we know of as a donut, but it has all the butter and layers that we love about croissant.

I have a sneaking suspicion that this is what everyone is looking for.

Let's all make it together and say, "HELGA'S IS BETTER!"  Because it is...and it would make her happy.

Let me just say that I'm adapting this based on modern advances in baking ingredients (i.e., we don't have "granulated flour" anymore and the yeast, it's so 10 years ago. Helga would approve 100%.

For the Danish dough

for the butter block

To finish the Cronuts:

For the Danish filling:

To finish the Danish:

For the Danish dough

*** You'll notice in the original recipe that 2 packets of compressed or active dry yeast are called for.  I prefer instant yeast.  It doesn't require "blooming" and is very reliable compared to active or compressed yeast.  I also recommend only using 1 packet, as that is more than enough yeast for the dough.  ***

•In the bowl of a stand mixer, whisk together the water, milk, eggs and vanilla bean paste until smooth, making sure that the egg yolks are completely incorporated into the mixture.

•In another bowl, stir together the flour, sugar, instant yeast and salt (and cardamom, if using).  Add to the wet ingredients in the mixing bowl and attach the dough hook.

•On slow speed, mix the dough for 5 minutes until smooth.  Add the butter, a few bits at a time.  Continue mixing until the dough pulls away from the sides of the bowl and is smooth and shiny, about 5 more minutes.  Turn the dough out onto plastic wrap and cover completely.  Refrigerate for 20 minutes.  In the meantime, make the butter block.

For the butter block

•Fold a piece of parchment, the size of a half sheet pan, in half.  Set aside.

•Cut the butter into small pieces. Combine the butter and flour in the bowl of a stand mixer fit with a paddle attachment.  Mix on slow until the butter is smooth.

•Remove the dough from the fridge and turn out onto a lightly floured surface.  Roll into a 9" x 18" rectangle.  Place one piece of 6" x 8" dough across the center of the dough and lift the left piece of dough up and over the butter, sealing the edges with your fingers.  Place the other sheet of butter on top and bring the other half of dough over that, again sealing the butter in.  Wrap in plastic wrap and chill for 20 minutes.

•Turn the dough out onto a lightly floured surface.  Roll the dough into an 8" x 18" strip.  Fold both narrow ends in to meet at the center,


•Whisk yolks, sugar, salt, cornstarch and vanilla bean paste  in the bowl of an electric mixer until light and fluffy.

•Simmer cream and milk in a heavy saucepan and slowly pour the hot cream into whisking sugar/yolk mixture until well combined.

•Transfer back to the saucepan and whisk over medium heat until thickened.

•Place in a bowl and cover the top of the cream with plastic wrap to prevent a skin from forming.  Refrigerate until completely cool.  You can add many flavors at this point, including orange blossom or rose oil.

•Roll out the chilled danish dough to 1/4 inch thick on a floured surface. Allow to rest for 10 minutes . Stamp out "donut" shapes with a very sharp donut cutter (I use an Ateco cutter).  Transfer the donuts and "holes" to a parchment lined sheet pan.  Cover with plastic wrap and allow to proof for an hour, until doubled in size.  Be careful to proof in an area no warmer than 70-80ºF.  Many new ovens now have a "bread proof" feature and they tend to run far too hot.  Better that you just cover and allow the proof to take place on the kitchen counter.  It may take longer than an hour but better a well risen pastry than a hockey puck. 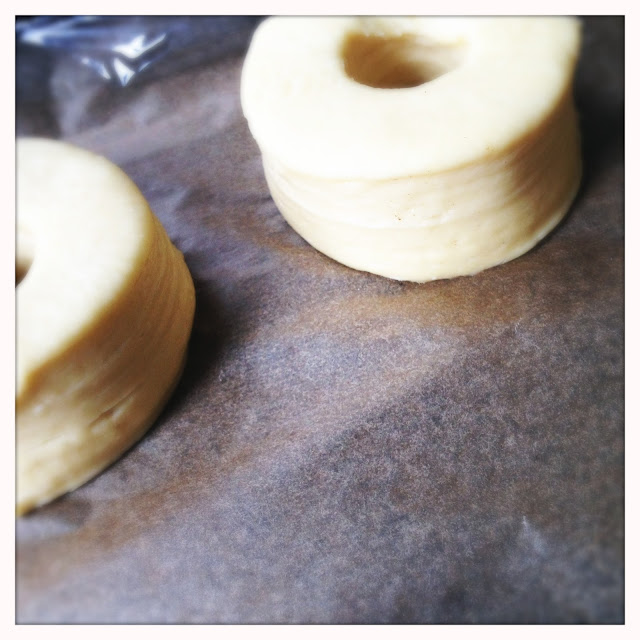 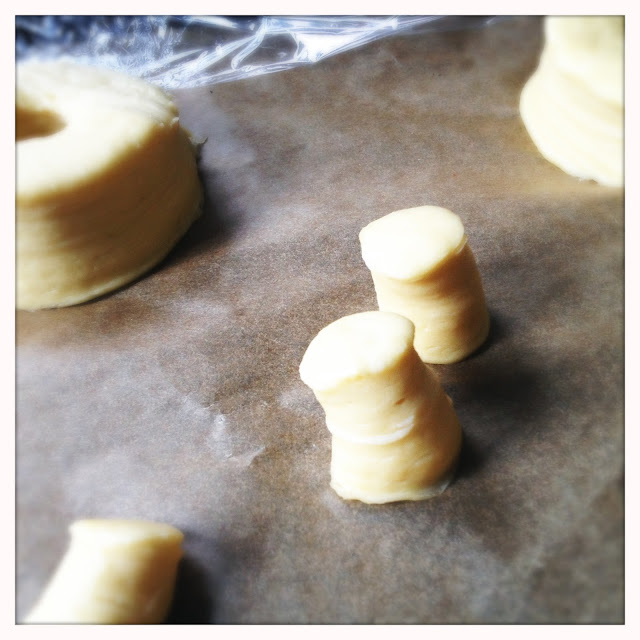 •In a large stock pot, heat the oil to 350º to 360º F.  Carefully place the donuts (and the holes) in the oil.  Allow the donuts to fry on one side for 45 - 60 seconds, until deeply golden brown.  Using chopsticks, flip the donuts and fry for a minute more, until both sides are deeply golden brown and they donuts have expanded considerably.  The holes take less than half that time.  Place the donuts on a piece of paper towel to drain and cool.

•Once the donuts are cool, coat the outside of the donuts (and holes) with the granulated sugar.  Place the cooled pastry cream in a pastry bag fit with a small open tip.  I find open spaces in the center of the donut holes and wiggle the tip inside and squeeze in the cream.

•For the glaze, place the confectioner's sugar in a bowl and stir in 1 tablespoon of milk.  If the glaze is too thick, add a drop of milk at a time until the glaze is spreadable.  Drizzle on top of the donuts.

For the danish filling

•Combine all ingredients, the mascarpone, yolk, confectioner's sugar, flour, lemon zest and scant pinch salt in the bowl of a stand mixer fit with a paddle attachment.  Mix on medium until smooth.  Transfer the filling to a small bowl, cover with plastic wrap and refrigerate for at least 30 minutes or until firm.

To finish the Danish: 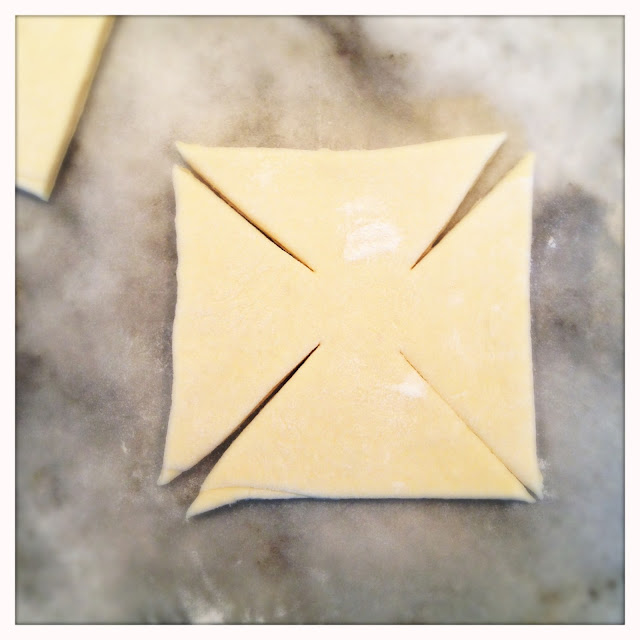 •Take the left corner of one cut "corner" and press into the center of the square.

•Continue with the remaining "left corners" to create a pinwheel.

•Place the pinwheels onto a parchment lined sheet pan and cover with plastic wrap.  Proof in a warm corner of the house until doubled in size.

•Place a dollop, about a tablespoon, of mascarpone filling at the center of each pinwheel and then place a teaspoon of your favorite jam or fruit (I used reconstituted dried cranberry by pouring a few tablespoons of hot water over Craisins) in the center of the filling.  Brush the edges of the pinwheel with egg wash.

•Bake for 30 minutes or until the pastry is deeply golden brown and the filling is puffed.

•Allow the Danish to cool.  Whisk together the confectioner's sugar and milk.  Drizzle the glaze over the Danish.

***NOTE***  As it is with most laminated doughs that take a bit of work, you'll have scraps left over that you have a hard time tossing.  I either toss the scraps in the fryer (that's how I knew Danish dough was superior to all others, in the pastry shop I'd toss anything in the vat to see what deliciousness would come out) or if it's a longer piece of dough, I do this: