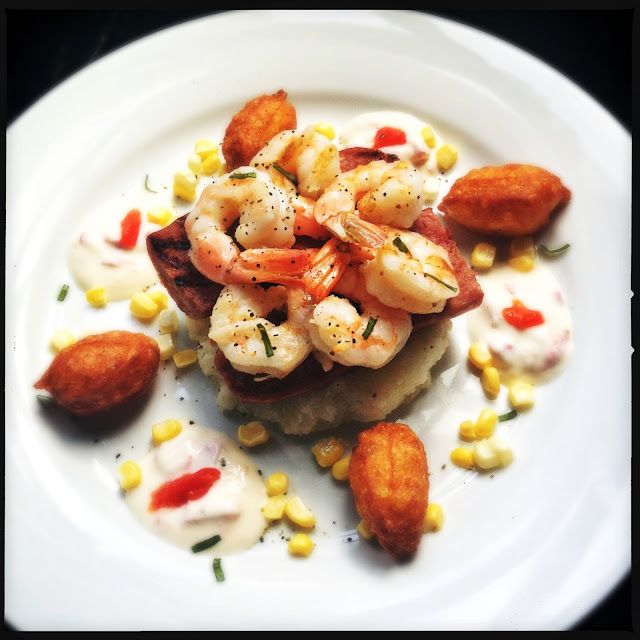 Early supper on a lazy Sunday is a treat.  It's lovely to spend the afternoon puttering around the kitchen, taking stock of what's left in the fridge and pantry.  I challenge myself to limit ingredients to what needs to be used immediately.  No running off to the grocery store.  But it has to be something special and thoughtful, especially on Father's Day.  It doesn't hurt when I can add an unexpected pastry element to the mix that pulls everything together.

Lately, I've been craving a low country boil, a convivial pile of southern goodness where all the ingredients are shoved into a huge pot to boil and dumped onto a table lined with newspaper.  Shrimp, potatoes, sausage, corn, spices.  Happiness.

It's best for a large crowd, though.  And as I was suffering from a commensurate craving for pommes dauphine, why not scale it down and spiff it up? 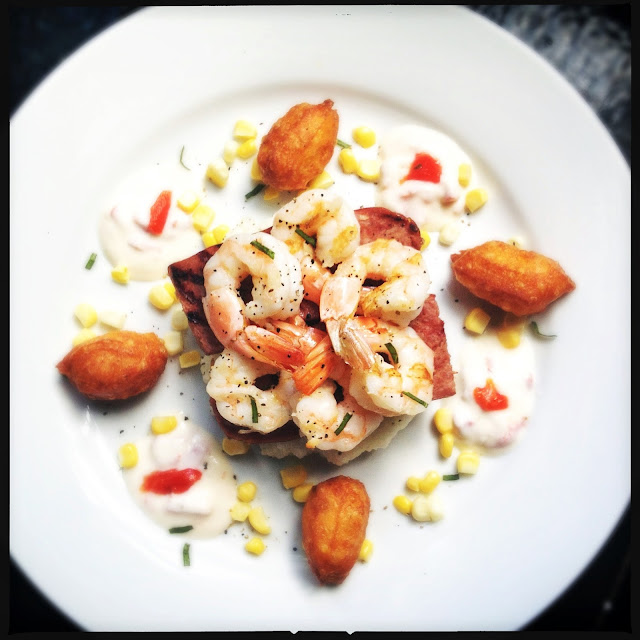 Pommes Dauphine is traditionally a combination of choux paste (think profiterole/eclair/cream puff shell) and potato.  Instead of baking, however, it's fried.  It's airy.  It's crunchy.  It's addictive.  It's also missing something if I'm going to make it low country.  So I add fresh corn kernels and a touch of cayenne.  For the "boil" I actually grill the ingredients to keep it simple.

For the pommes dauphine

1 cob of fresh sweet corn, kernels cut from the cob.  Pat dry on a paper towel.

salt and pepper to taste

salt and pepper to taste

2 cobs of fresh sweet corn, the kernels cut off

For the pommes dauphine

•In a large pot, pour enough oil into the pot so that it's at least 2" deep.  Place over medium heat and attach a candy/frying thermometer.  You are aiming for 340º to 350º F.

•In a saucepan, combine the milk, water, butter, a generous pinch of salt and the cayenne pepper.  Bring to a simmer, allowing the butter to melt completely.

•Immediately add the flour and stir with a wooden spoon over medium heat until the "paste" comes away from the sides of the saucepan.  Continue stirring over the heat for 2 more minutes to allow moisture to evaporate.  (Traditionally, the potato for pomme dauphine is added later, during the egg addition.  However, I like to add it to the initial mix to insure that I've whisked off as much moisture as humanly possible in order to get a fluffier fritter)

•Add the riced potato and the corn to the saucepan and stir the paste for another minute over medium heat. Test for seasoning, adding salt and pepper before adding the eggs.


•Transfer the paste to a large pastry bag fit with a large open star tip.

•Once the oil has come to temperature, pipe inch-long dollops of the choux paste into the oil, using a knife to cut the dough off into the oil or use the side of the pan to do the same.  Fry until the entire fritter is deeply golden brown.  Remove with a slotted spoon and turn out onto a plate lined with paper towels.  Continue in this manner with the remaining paste. 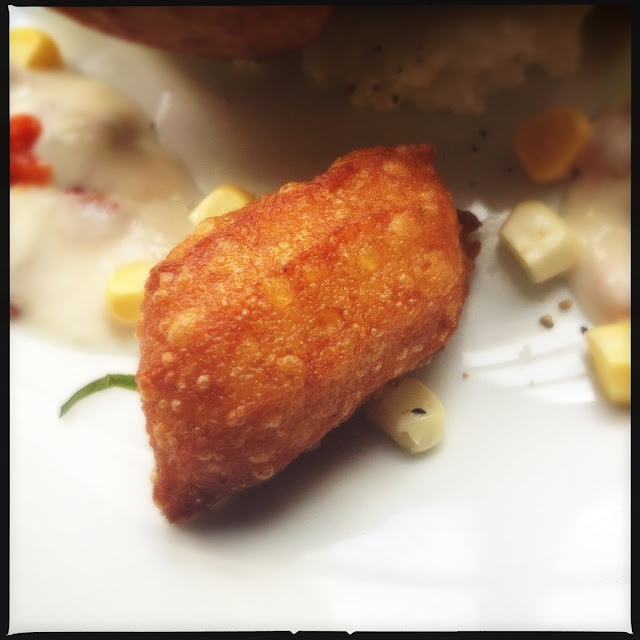 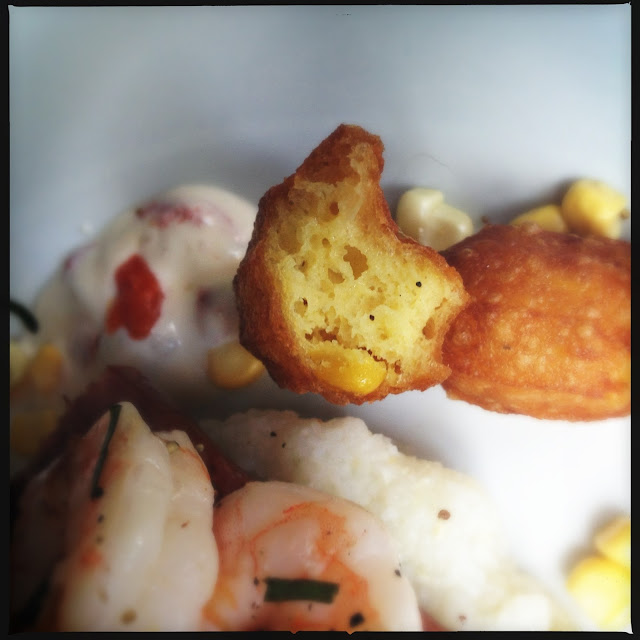 •Heat a grill pan and coat well with non-stick cooking spray.  Once the grill is hot, place the sausage on the grill to heat through completely.

•In a large bowl, combine the garlic, zest and lemon juice, olive oil, salt, pepper and pimenton in a small bowl.  Stir to combine.  Add the shrimp and stir to coat evenly

•Spray the grill again and place the shrimp evenly on the grill.  Cook on each side until just opaque, about 2 minutes on each side.

•Divide the grits evenly among 4 plates and place a pat of butter upon the middle of the grits.  Arrange the Kielbasa and then the shrimp on top of the grits.

•Drain the jar of sliced pimientos well, if you need to, turn them out onto a paper towel and gently pat to remove excess moisture.  Combine them in a small bowl along with the the creme fraiche.  Stir to and season with salt and pepper.  Dollop the creme fraiche sauce on the plate and add the pommes dauphine.  Garnish with the corn kernels and a a bit of flat leaf parsley.