Since Bake It Like You Mean It has been out, I've had the best time traveling around the country teaching and demoing cakes from the book.  My favorite has become a variation on the Lovers, Dreamers and You Cake.  As I make it traditionally, it's a vertically layered, rectangular cake. 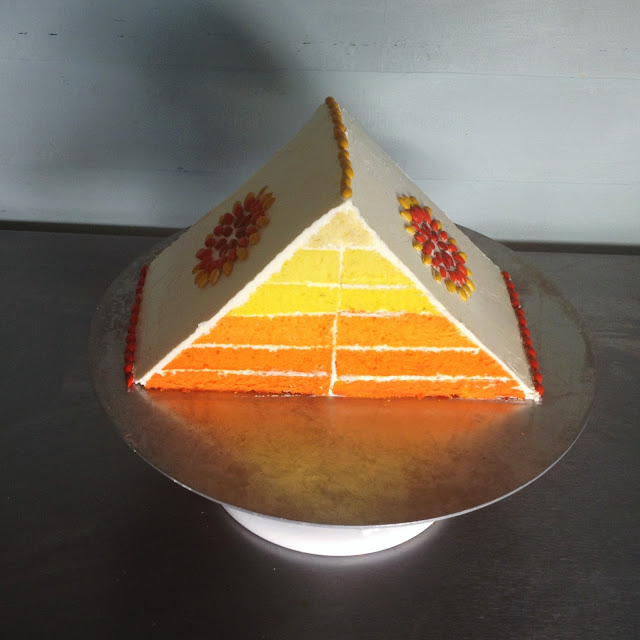 In one of my King Arthur Flour Classes, I decided that I'd love to add yet another twist to the already zany confection by carving it into a pyramid.


I was scheduled to demo and talk for a lovely crowd in S. Hero, Vermont yesterday and I fell back on my go-to demo.  But the heatwave we've been drowning in inspired a variation on my rainbow.  I opted for an ombre cake, one where a single color in many graduating shades is the basis of inspiration.


I chose sunshine yellow as my inspiration color and reduced or increased the hues for the layers.


I'm sending you to this link HERE for the basic cake recipes and initial building instructions.  What follows is the pyramid technique:

(2)  Assemble the cake as directed in the link up to the point were you turn the cake to see the vertical layers.  Make sure that the cake is VERY COLD and the filling is set, otherwise the slicing and dicing that follows will be a bit messy. 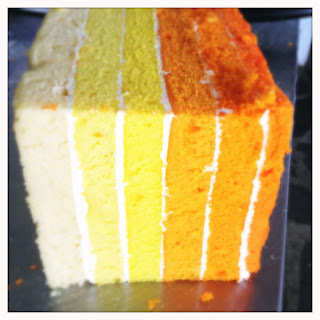 (3)  You'll then cut the cake in half lengthwise.  Something you DON'T do in the original incarnation. 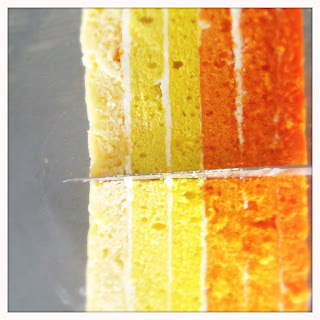 (4)  Cut each half diagonally in half so that you end up with 4 triangles of cake.  The reason you cut the cake in HALF and then cut each piece diagonally is that if you cut the entire cake diagonally, when you arrange the pieces to form a pyramid, the colors of the layers won't match up.

I have to thank Michele Gregoire Joyce, one of my students and a fabulous baker with her own baking business, for puzzling out how to match the layers together for the pyramid.  I hadn't thought to cut the cake in half to make the layers match.  She looked at her assembled cake in class and bullied through the geometry.  Thank you Michele!

(5)  Once both halves are sliced diagonally, match up the corresponding halves.  One triangle from the first half will match up perfectly with one triangle from the second half.   It's likely that on your first go around you'll be flipping pieces around quite a bit but you'll find each piece's soulmate.
(6)  Once you've found the right pairings, spread a small amount of filling in between the matching pieces to seal them together. 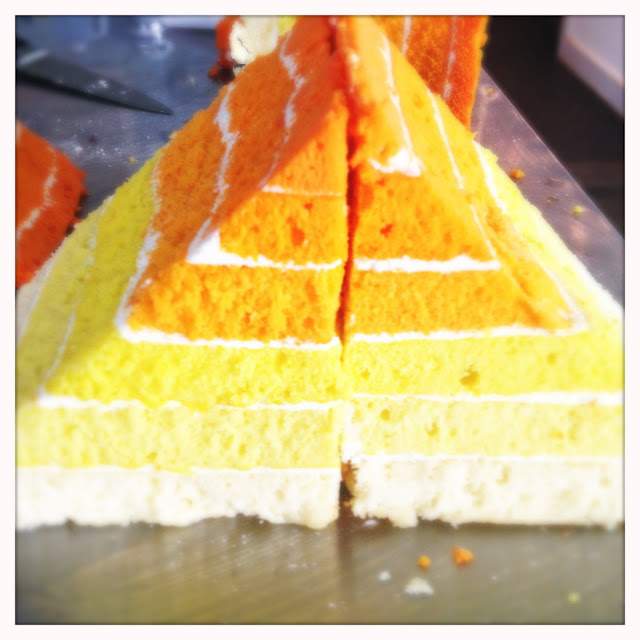 (7)  Cover the outside of the cakes (you'll either have two separate cakes or you can stick them together into one long pyramid) with icing.  You can follow the muppet dust instructions from the original link

You can do as I did and arrange candy coated SUNflower seeds in a lovely sunburst pattern.  Might as well play up the sunshine because it sure is beating down on us. 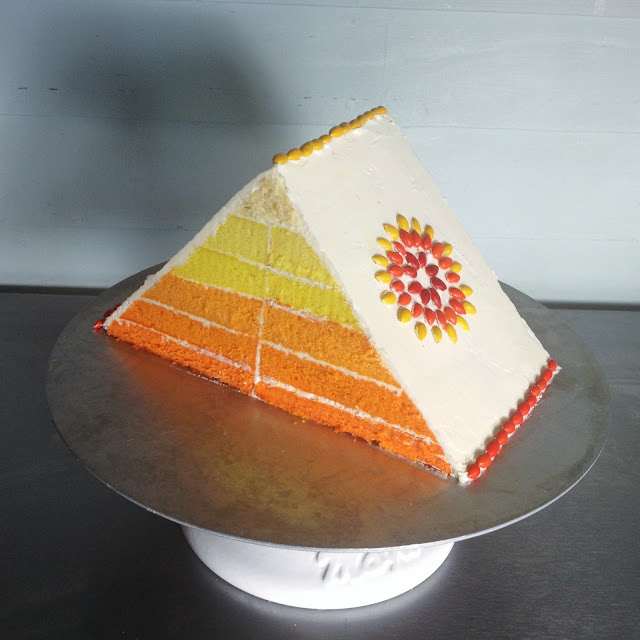