Not Your Typical Paris-Brest 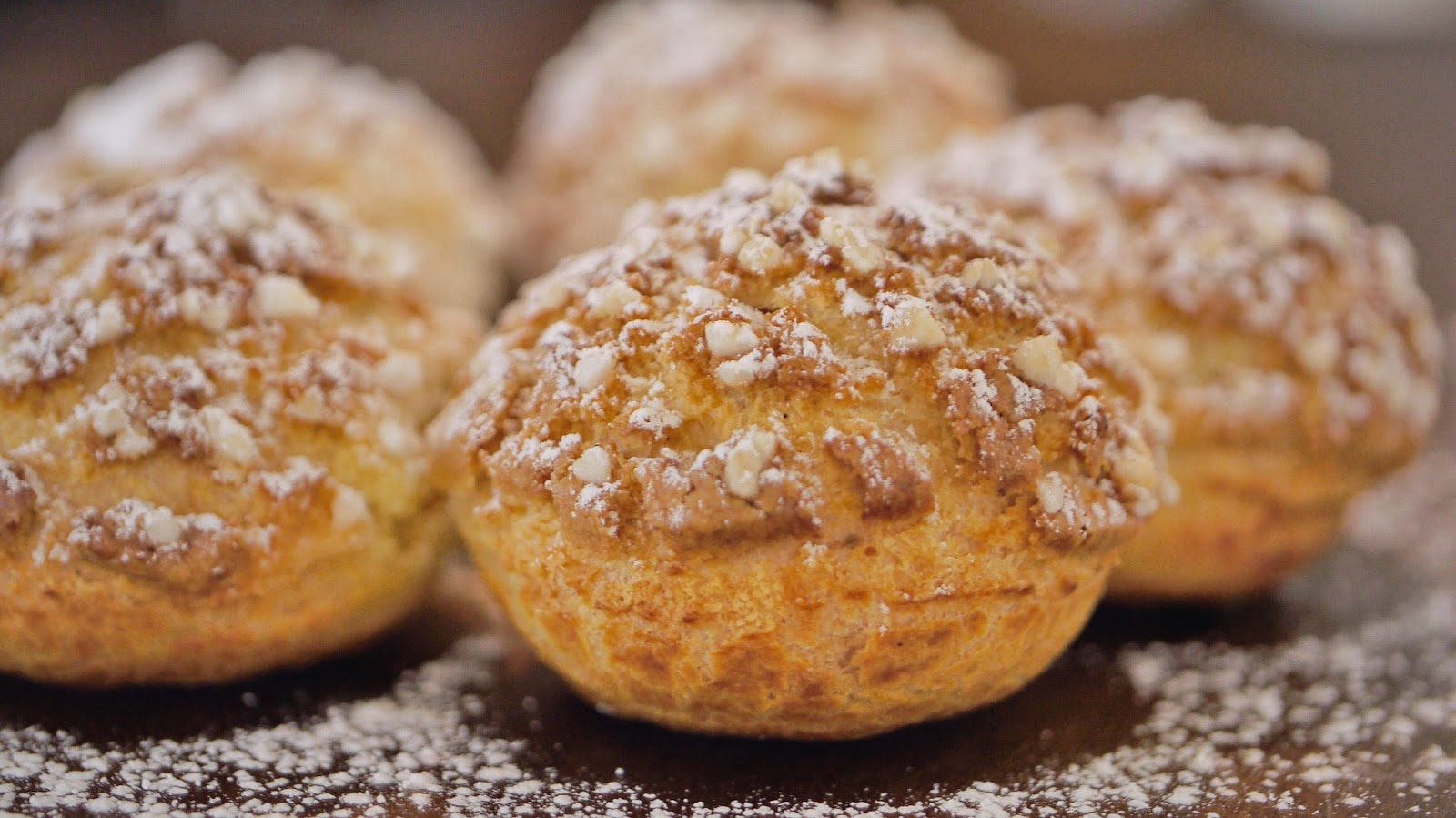 There was once a bicycle race in France that ran from Paris to the town of Brest and then back to Paris.  The cycling tourney was last held in 1951.  However, the pastry that was named in honor of the grueling trek, the Paris-Brest, still lives on. 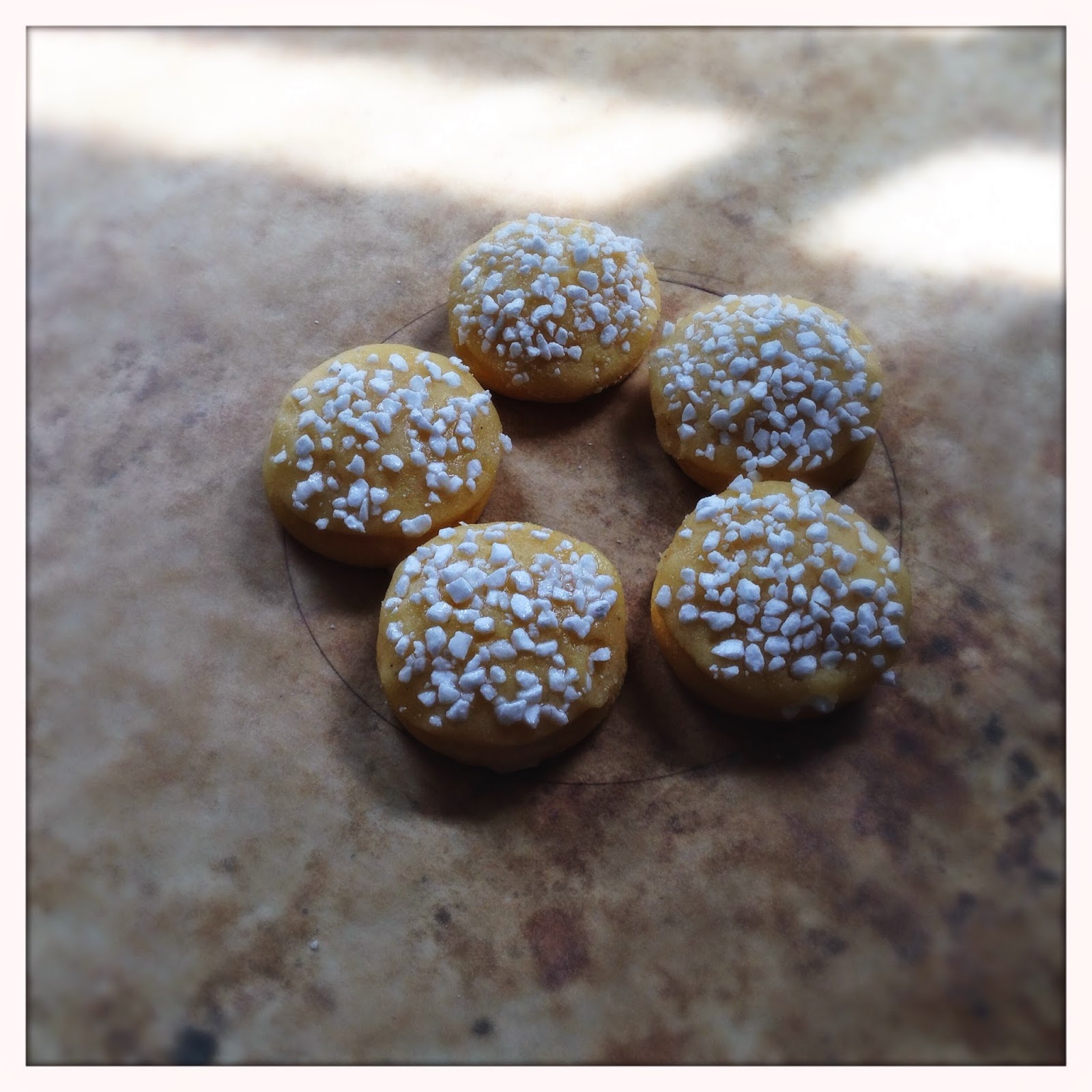 The backbone of the pastry of comprised of piped choux paste (think cream puff and eclair) in the shape of a wheel.  There are a few variations in piping.  This is how I choose to present the sweetness.

The filling is a praline cream.  The top is often sprinkled with sugared almonds.

But as I'm in Vermont, not France, I take liberties.  Instead of praline cream, today I chose to use straight-up Nutella as my filling. 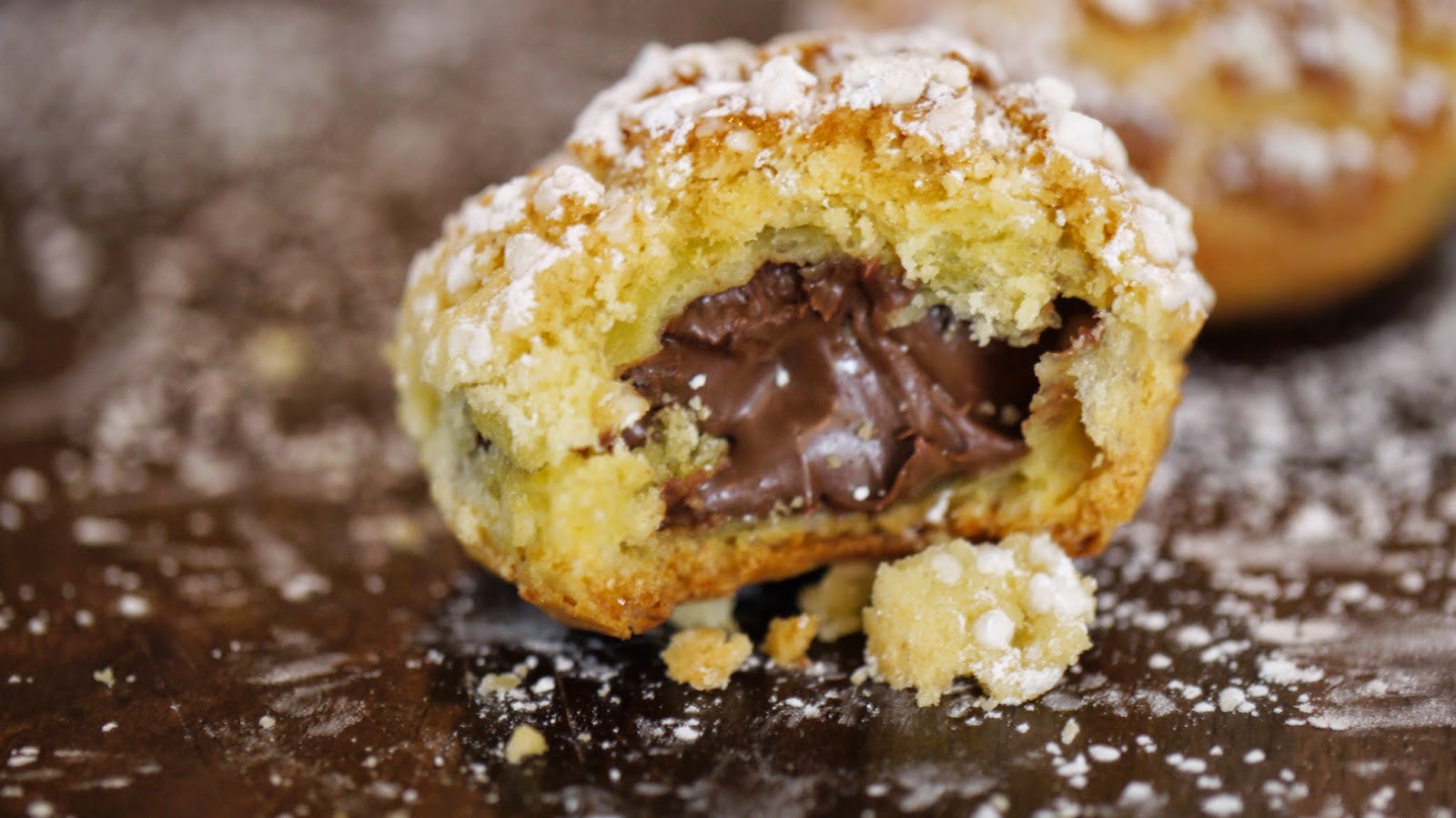 To top the precious pastry baubles, I cut out almond sable rounds and sprinkled those with Swedish sugar, creating a sweet chapeau for each little puff.  And as I was left with enough sable dough, I made delicious rounds of pure, buttery and almond cookie goodness to bring to friends. 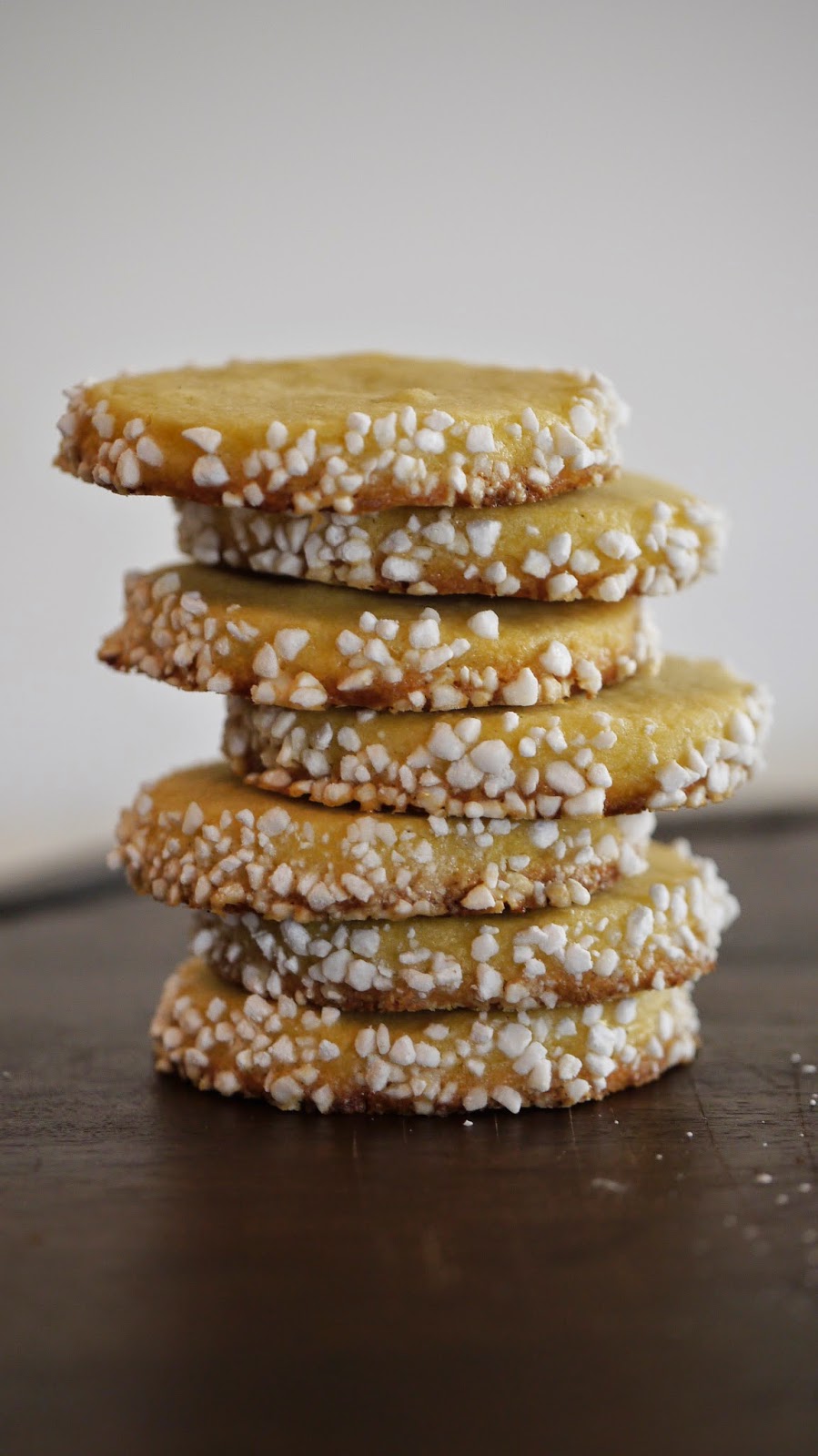 Of course you can just make individual puffs or you can make your "tire" even larger. 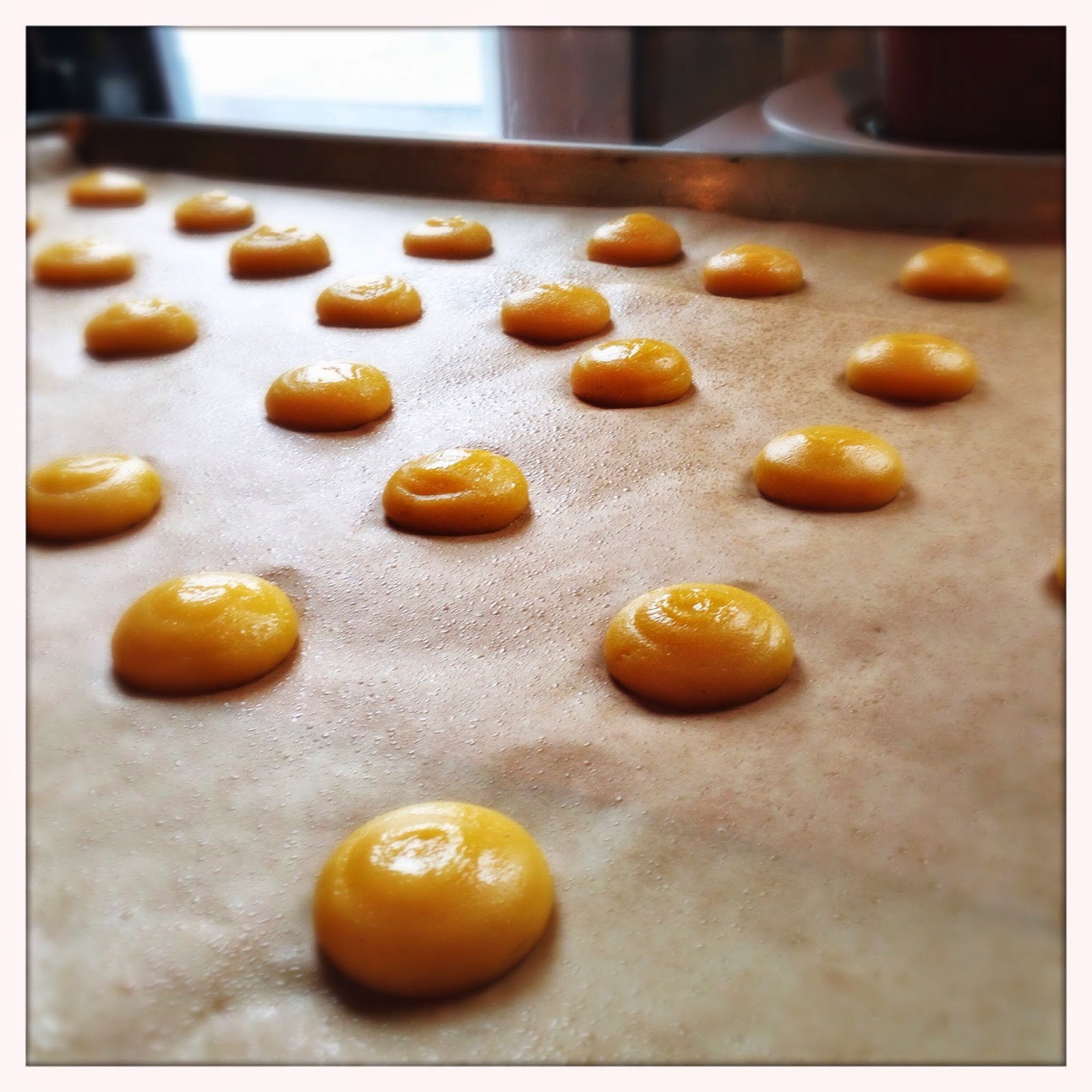 Not Your Typical Paris Brest 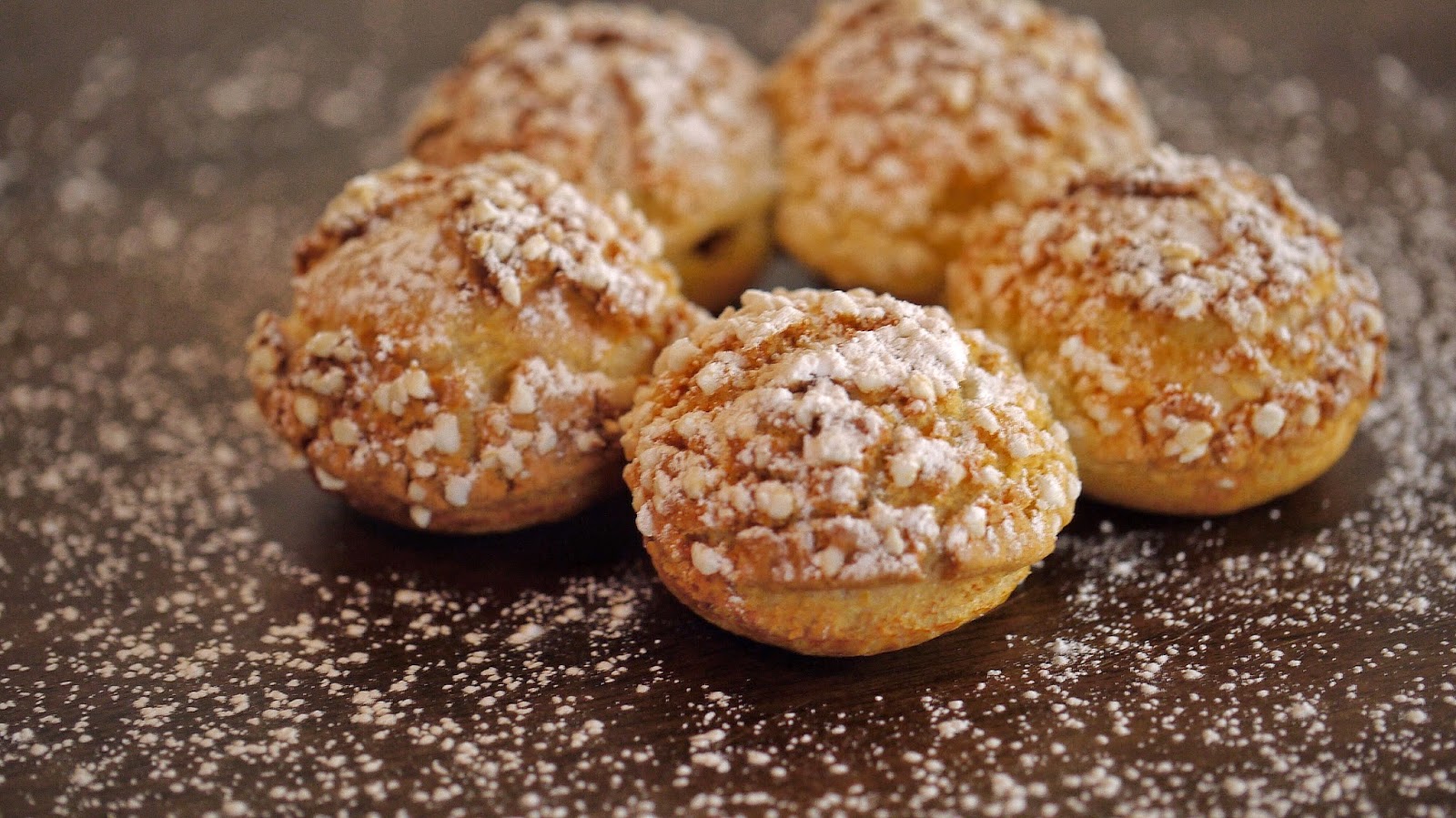 In a large saucepan, combine the milk, water, maple syrup, salt, vanilla bean paste and the butter over medium heat, stirring until the butter melts and the liquid just begins to simmer.  Add the flour, all at once, and stir with a wooden spoon until the mixture becomes a very thick paste and pulls away from the sides of the saucepan.  Continue stirring for another minute.

Transfer the paste to the bowl of a stand mixer fitted with the paddle attachment.  Mix on medium speed for a few minutes to dissipate some of the heat.  Add the eggs, one at a time, beating well between each addition.  The final mixture should be a smooth, shiny, easily piped paste.

For the almond sable

In the bowl of a stand mixer fitted with the paddle attachment, add the almond paste and sugar.  Mix on medium speed until the mixture is smooth.  Add the butter and continue mixing on high speed until light and fluffy.

In a small bowl, whisk together the egg, vanilla bean paste and almond extract.  Scrape down the sides of the mixing bowl and add the egg mixture.  Mix until combined.  Add the flour and salt all at once and mix on low until the dough just comes together.

Transfer the dough to a large piece of plastic wrap and gently turn the dough over a few times to make sure that all of the flour is incorporated.  Wrap the dough well and refrigerate, at least 20 minutes.

Roll out the dough 1/8" thick and using a small round cookie cutter, cut inch round circles from the sable dough.

Bake for 30 -40 minutes, turning the trays in the middle of the bake, or until the choux is puffed and deep golden brown.  Allow to cool completely.

Using a wooden skewer or chopstick, poke holes into each puff along the inside perimeter.

Fill a pastry fitted with a medium sized plain tip with Nutella.  Gently place the tip inside the hole in the choux and fill with Nutella.

Dust the tops with confectioner's sugar.