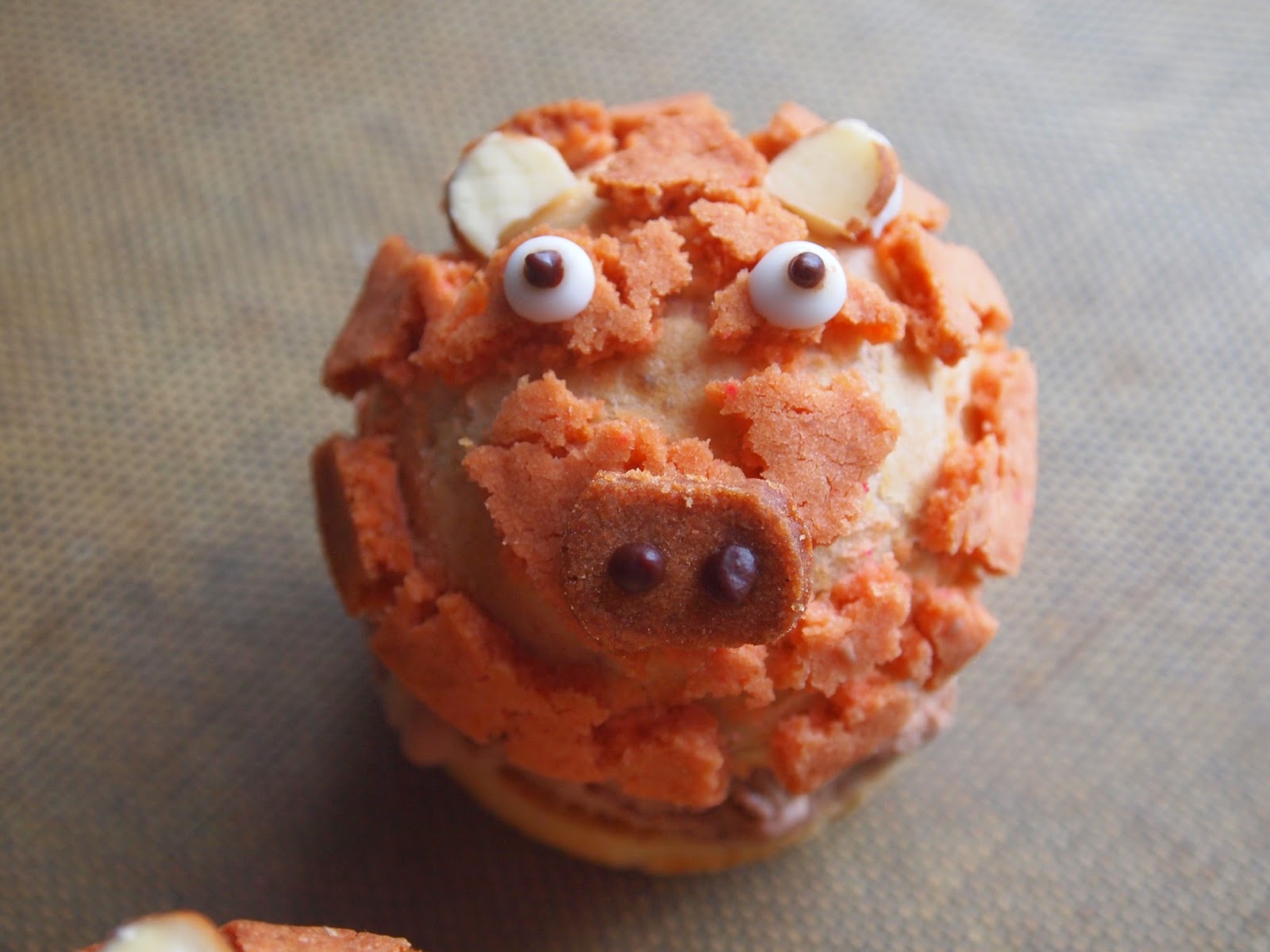 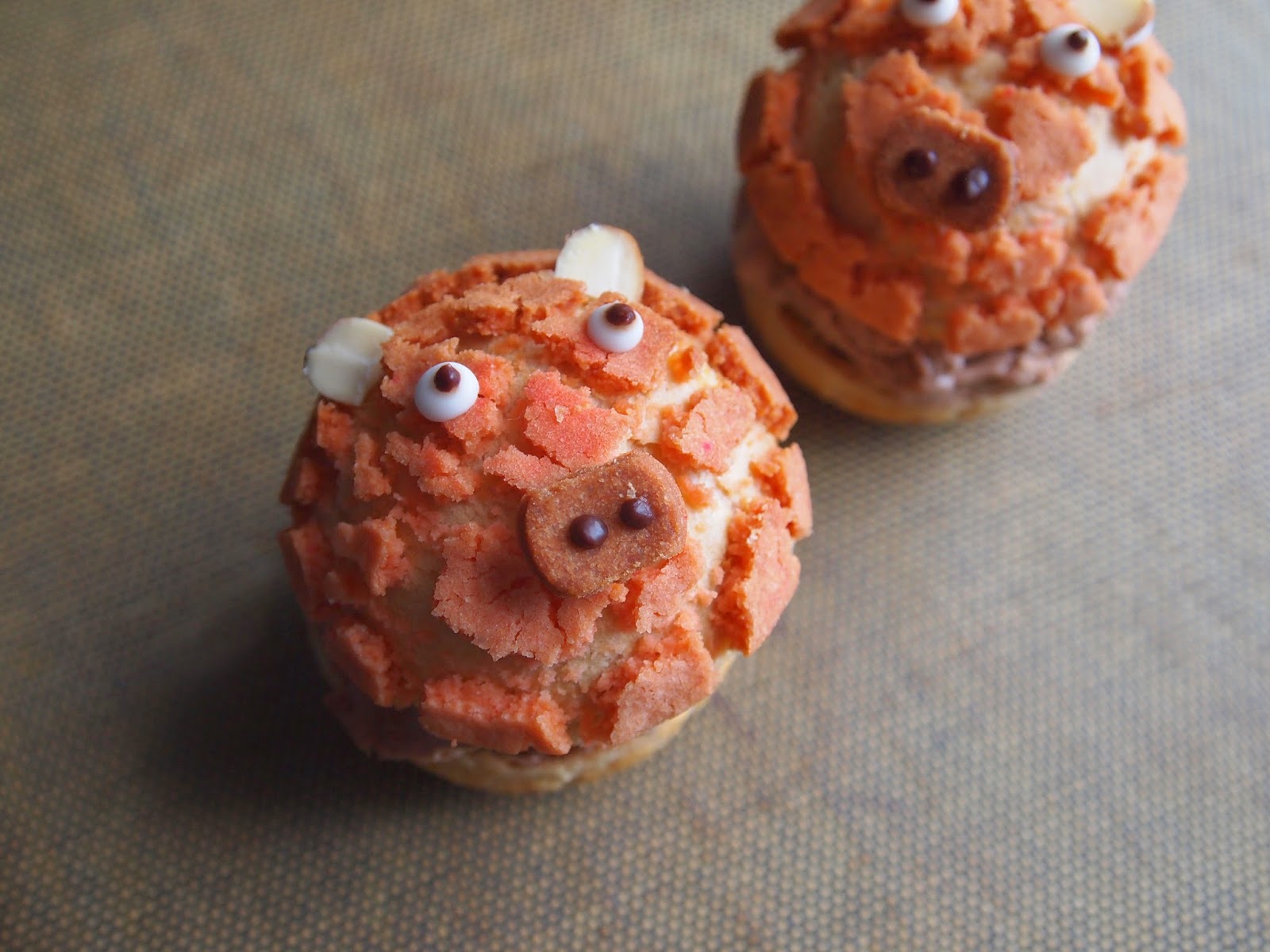 Let's make this a beautiful one, full of kindness and joy.  And pastry.  To celebrate this new year, I made loads of croissant (recipe to come later in the year),

In Germany, pigs are a sign of good luck.  A harbinger of things moving forward if not fatter.  Sounds good to me! 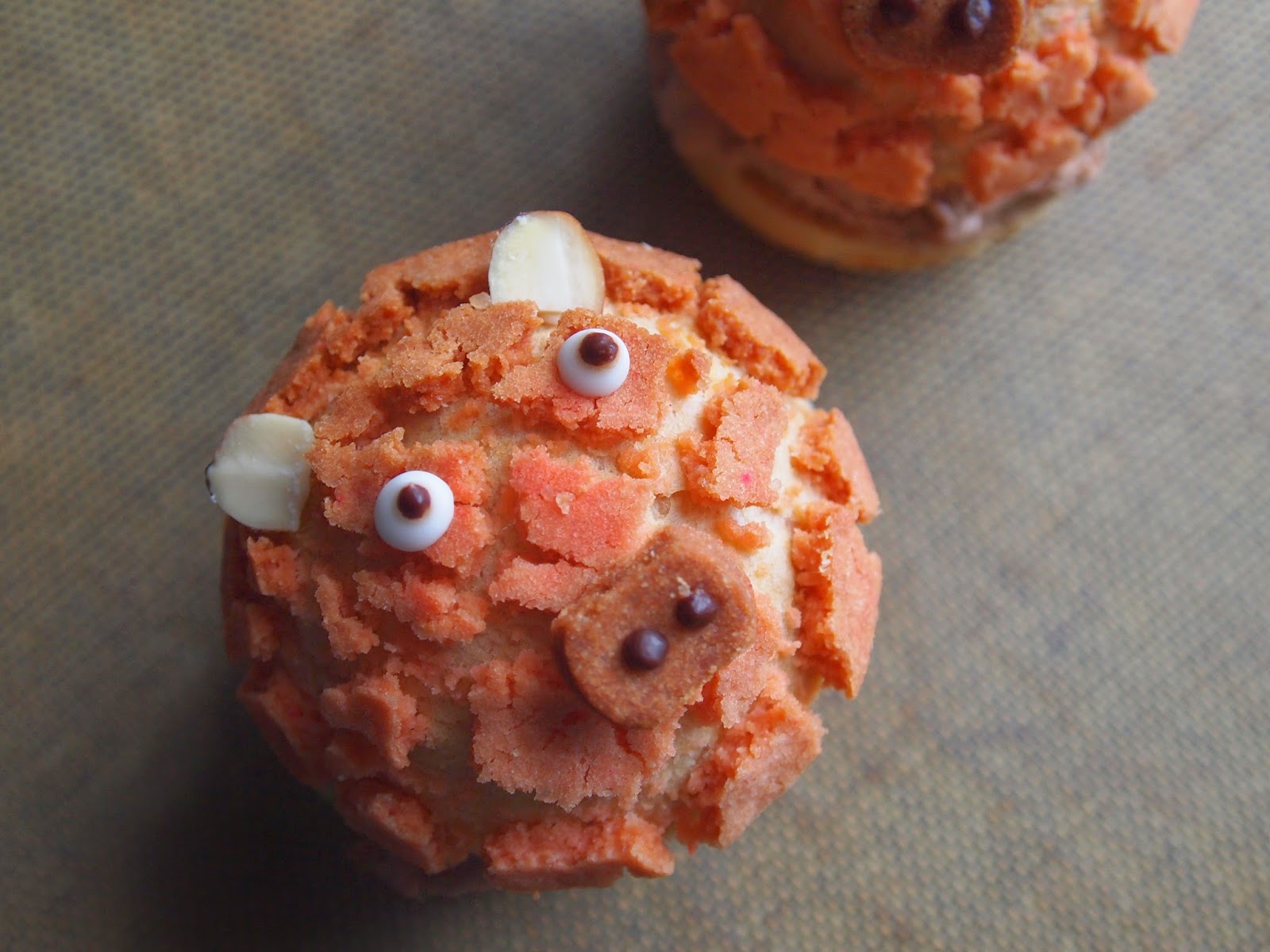 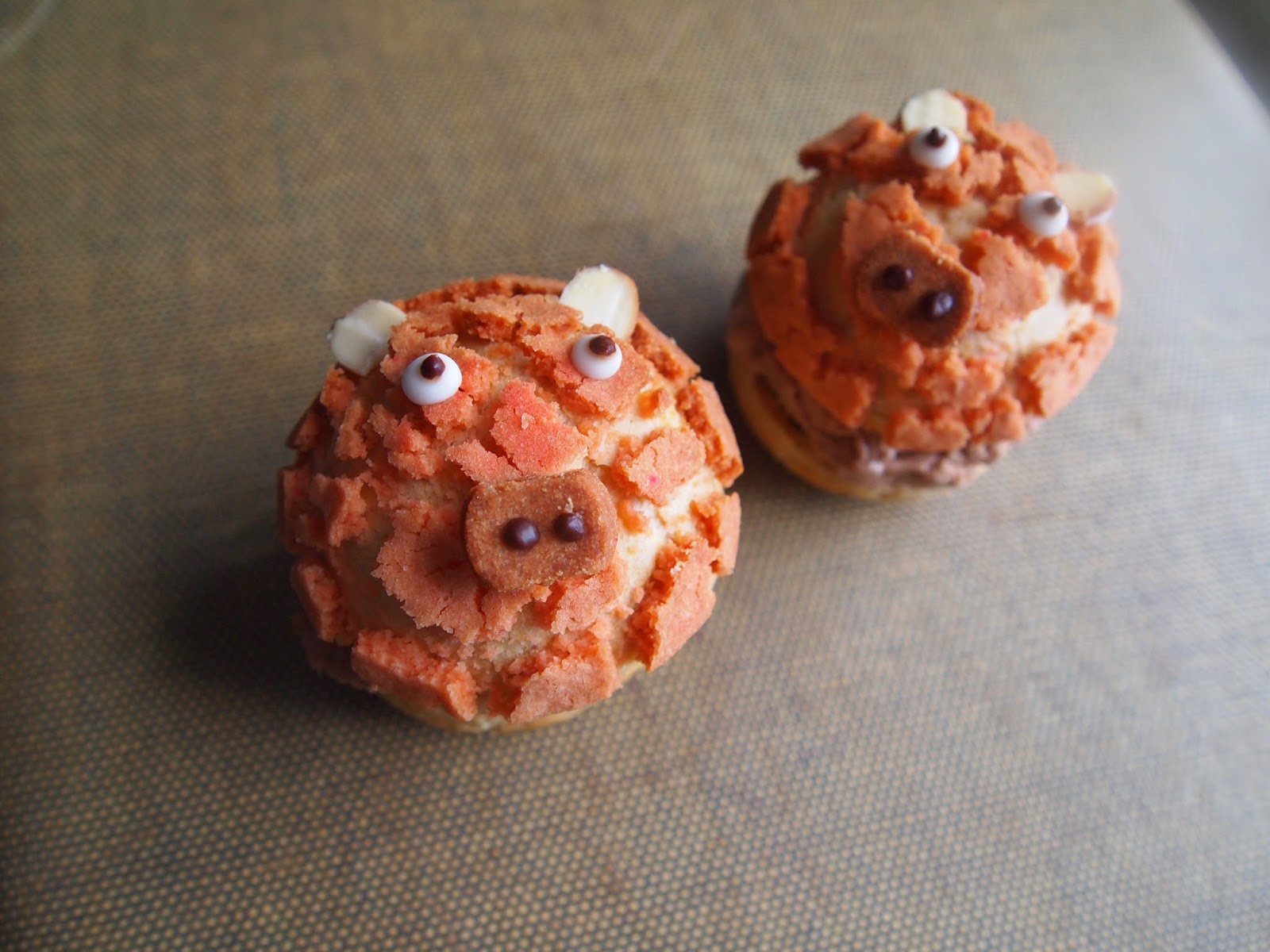 Transfer the dough to a large piece of plastic wrap and cover completely.  Refrigerate for 20 minutes.

Take a small amount of the dough, no more than 1/4 of it, and roll out on a lightly floured surface to 1/4" thick.  Using a small round cutter (I use the small end of a large open pastry tip) cut out 24 small rounds.  Cut the rounds on the top and bottom to make a rectangular shaped cookie.  Bake for 5 minutes or until baked through.  Allow to cool completely.

In a large saucepan, combine the water, butter sugar and salt.  Bring to a simmer over medium heat, making sure that the butter and sugar have completely melted.  Add the flour all at once and stir over medium heat with a wooden spoon until the paste is smooth, pulls away from the sides of the saucepan and is very shiny and thick.

Transfer the paste to the bowl of a stand mixer fitted with the paddle attachment.  Mix on medium speed and add the eggs, one at a time until the paste is smooth and pipeable. 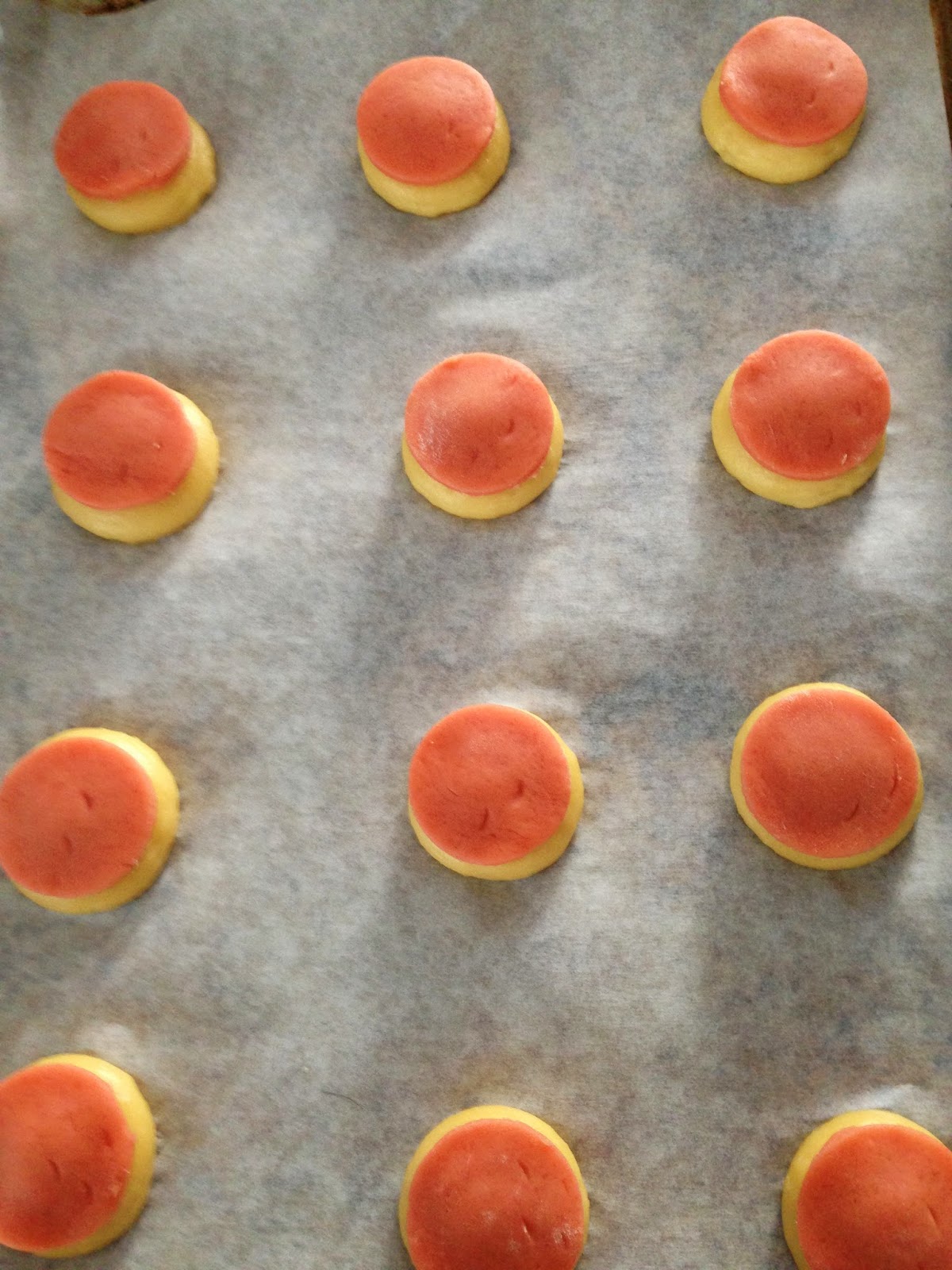 Roll out the remaining sable onto a lightly floured work surface to about 1/8" thick.  Cut rounds, slightly smaller in diameter than the choux and top the choux with the sable rounds.  Bake at 400º for 10 minutes and then reduce heat to 350º and bake for 1/2 hour more.

In a saucepan, bring the half and half to a simmer.

In a mixing bowl, whisk together the sugar, egg yolks, tapioca flour and salt until smooth.  While whisking, slowly add the half and half until well combined.  Transfer the mixture back into the saucepan and whisk over medium heat until the mixture thickens to the consistency of mayonnaise.  Take from the heat and immediately add the chocolate.  Stir until combined.  Transfer to a large bowl and cover the top with plastic wrap to keep the custard from forming a skin.  Refrigerate until cool, about 1 hour.

Whip the heavy cream to stiff peaks.  Fold into the custard.  Transfer to a large bowl, cover with plastic wrap and freeze until frozen but still scoopable.

Using an ice cream scoop, scoop the frozen custard and place on the bottom of the puff and cover with the piggy half.  Serve immediately.