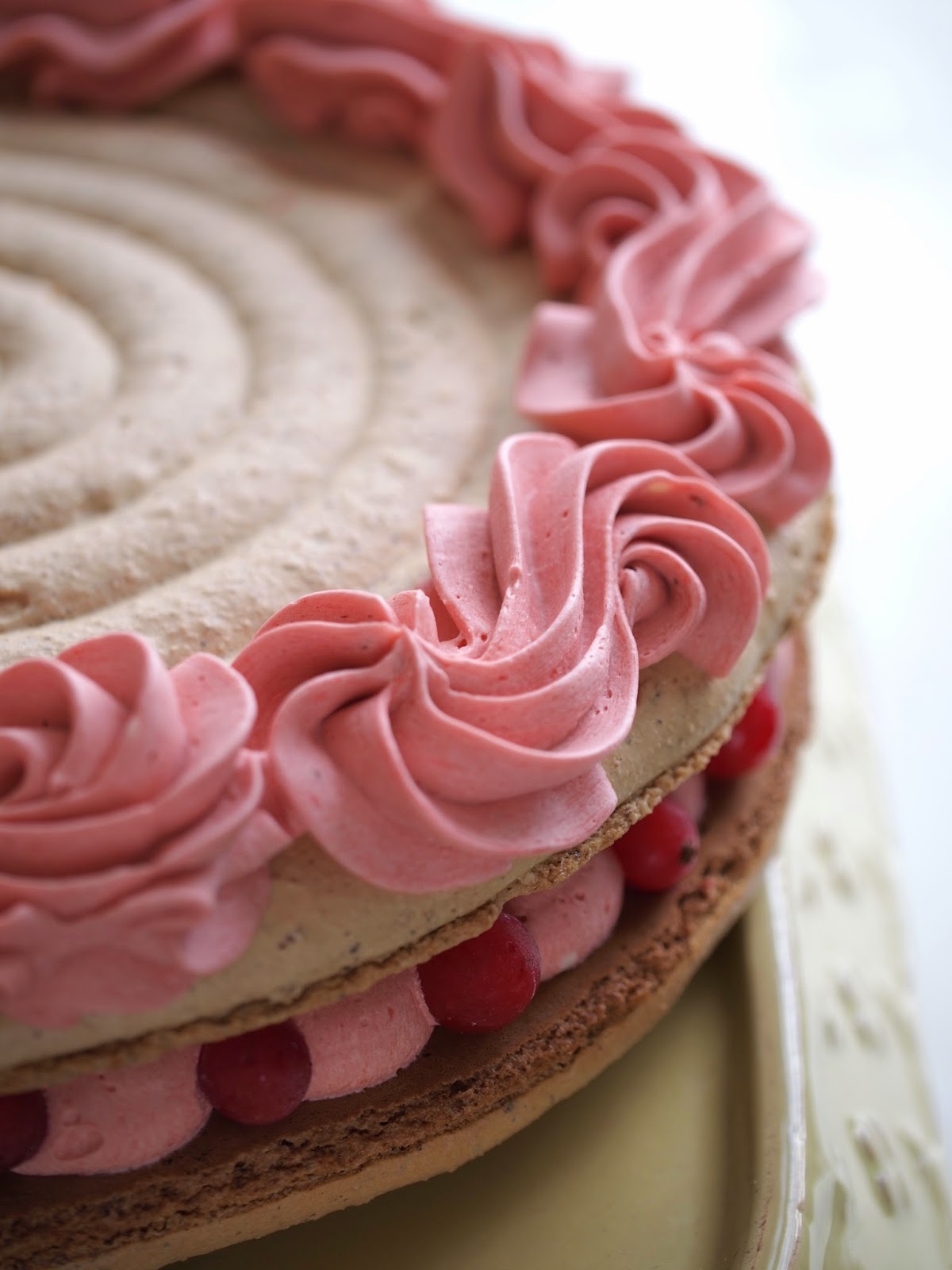 I had one cup of coffee too many this morning.  It's a shame since that means I should reign in my afternoon coffee consumption.  This would put a damper on 3pm Kaffee und Kuchen.  I've made a Linzertorte, one of my mother's favorites, but I've put a little French pastry spin on it.  She'd have appreciated the hybrid, with it's delicate hazelnut meringue layers and rich German Johannisbeere (currant) buttercream filling. 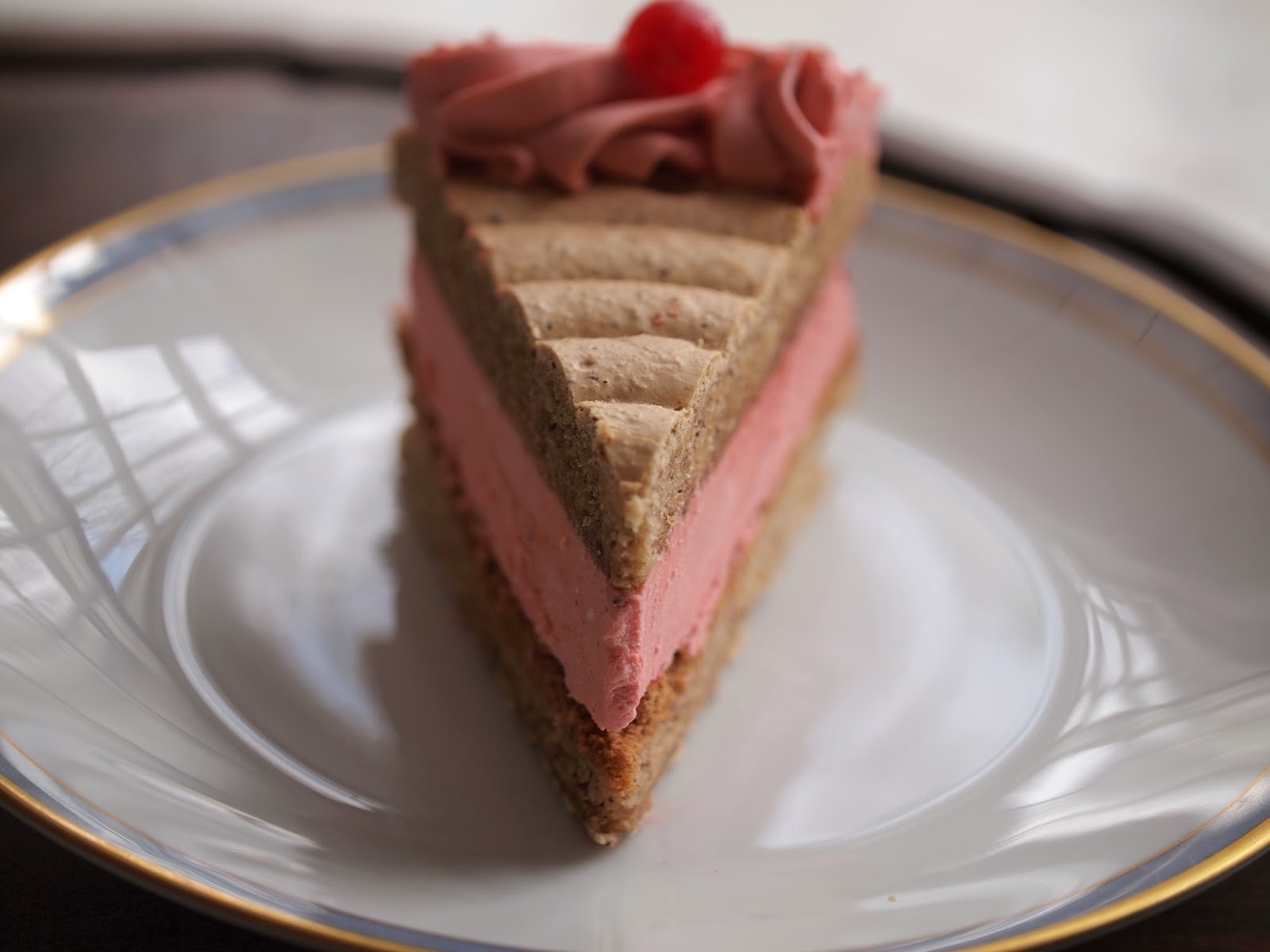 Linzertorte is believed to be the oldest cake in history.  It's etymology, like most historically significant foodstuffs, is the subject of numerous legends.  Most believe the Linzer is named after the town of Linz in Austria.  Totally reasonable.  Others claim that it's named for a Viennese confectioner by the name of Linzer.  Fair enough.  This version also keeps the cake squarely in the Austrian culinary tradition.  But there's another possibility, that a Franconian pastry chef by the name of Johann Konrad Vogel invented the tasty delight and came to mass produce it in the city of Linz. 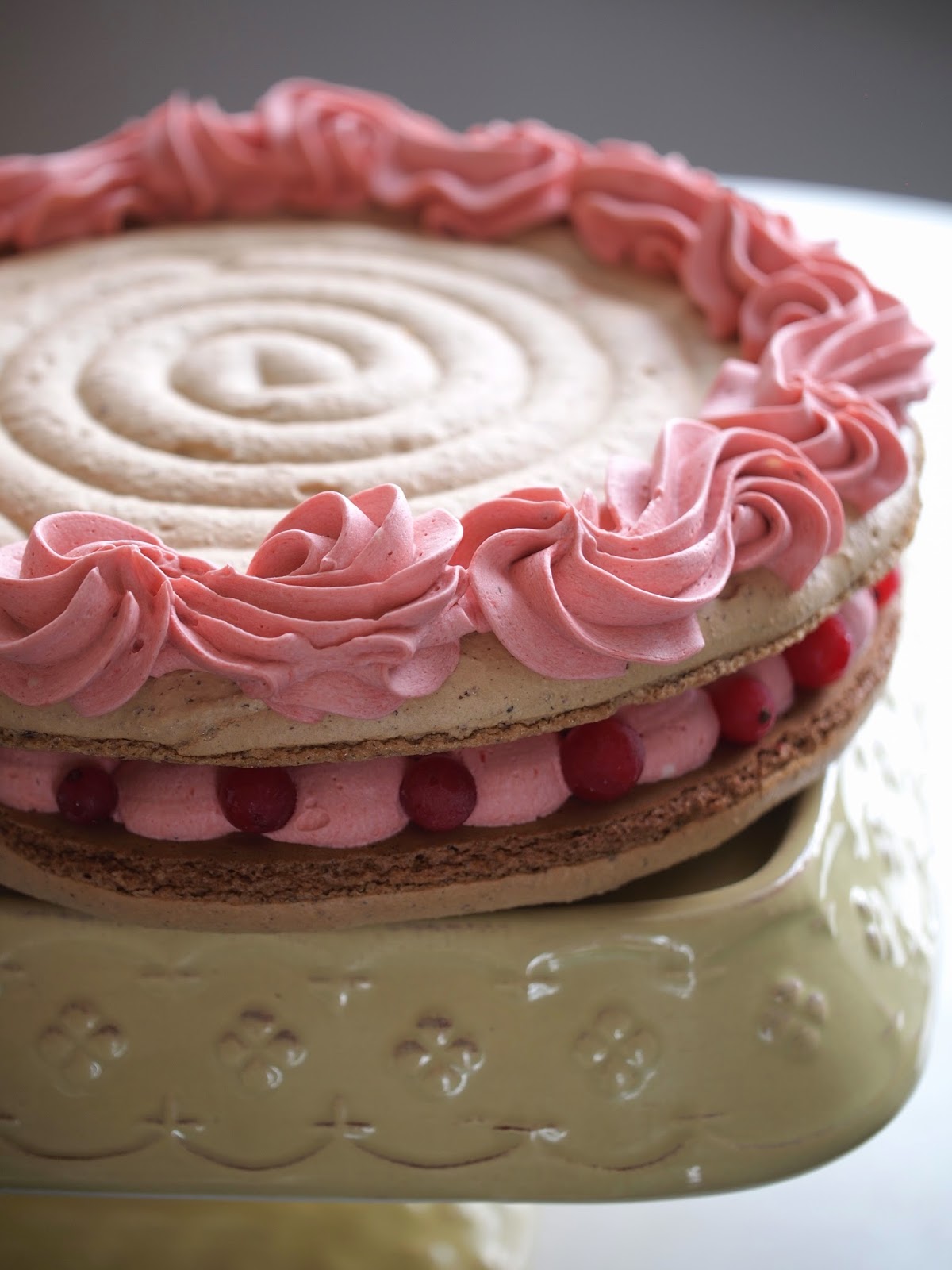 It's the last version that I prefer above all others.  It ties a pastry that brings to mind my mother's wonderful baking to her hometown, Nürnberg, the jewel in the heart of Franconia.  And what would we have enjoyed with our slice of torte if we could savor it together?  Coffee.  So let's hope that my caffeine jitters subside just enough that I can eat this beauty properly. 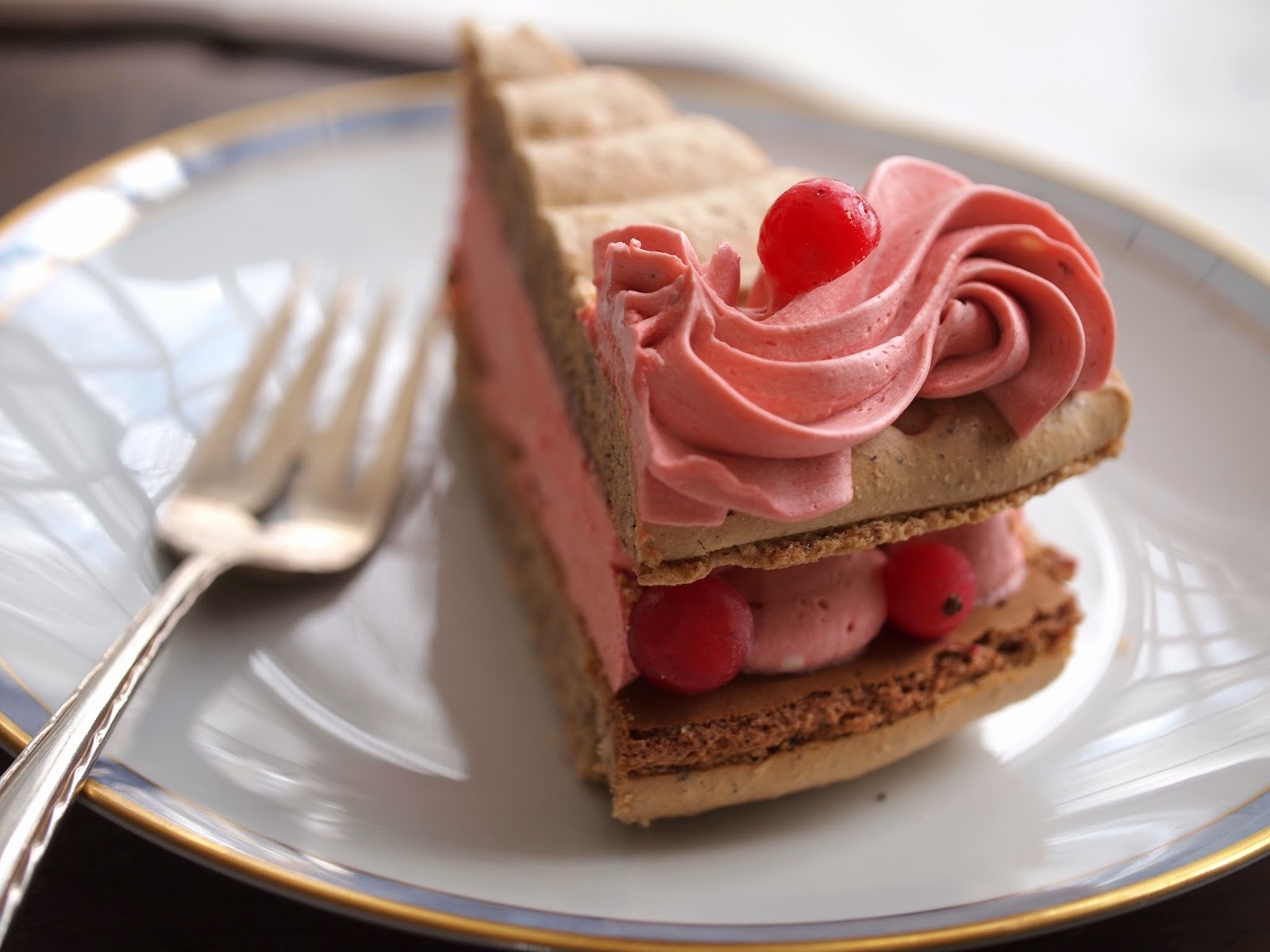 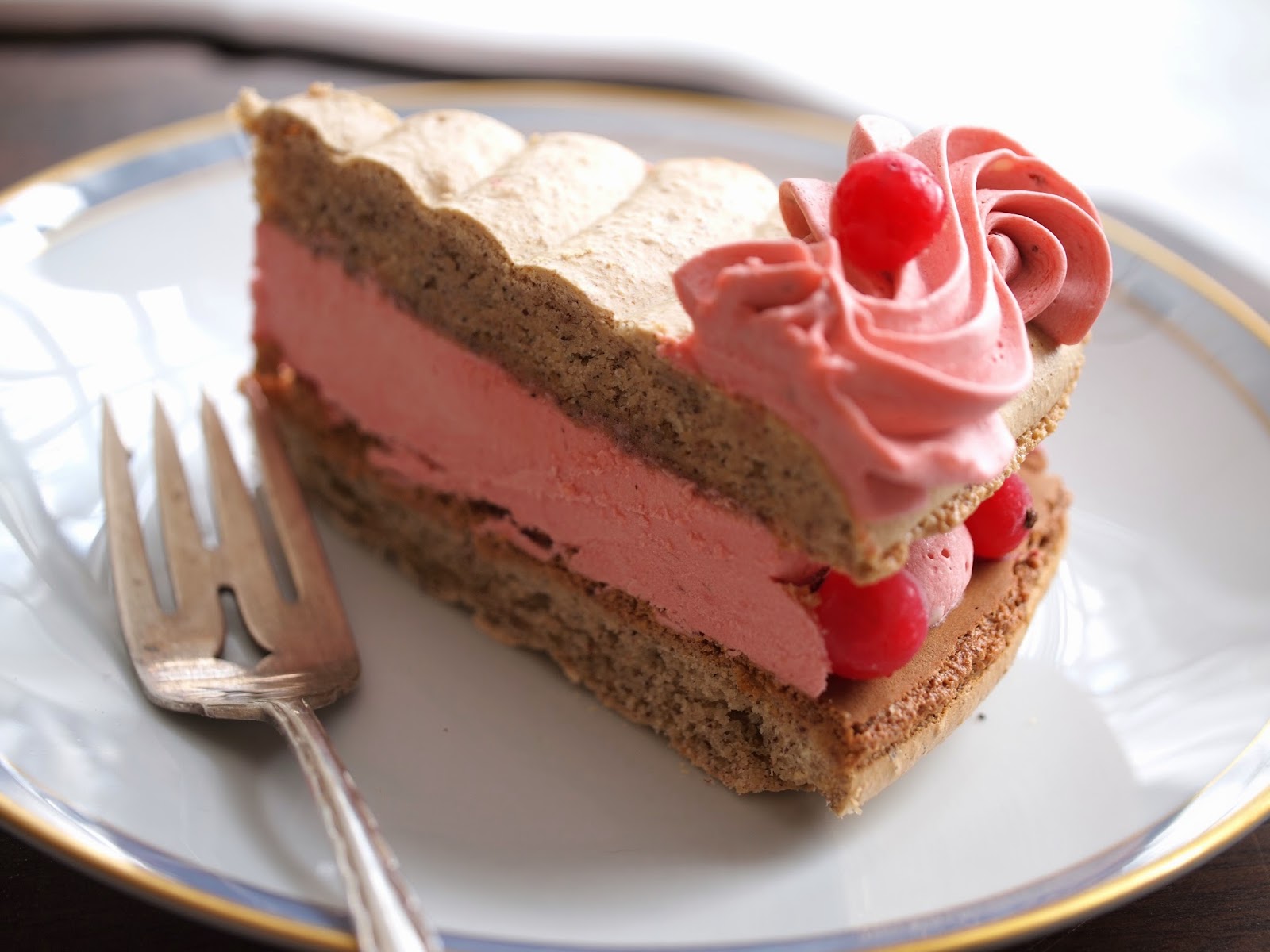 For the macaron layers

In a large bowl, combine the hazelnut flour, confectioner's sugar,  egg white powder, cinnamon and cloves.  Whisk for 30 seconds and then run through a fine sieve onto a piece of parchment and then run back through the sieve back into the bowl.  Set aside.

Fit a large pastry bag with a large open pastry tip.  Line 2 half sheet pans with parchment plus one more lined sheet pan in reserve.  Using a 9" cake pan and a Sharpie, trace around the cake pan to create a 9" circle and flip the parchment over so that you can still see the outline of the circle.  Do the same on the 2nd piece of parchment.  Set aside.

In the bowl of a stand mixer fitted with the whisk attachment, combine the egg whites and salt.

In a small, heavy saucepan, combine the granulated sugar, 1/4 cup of water and the lemon juice.  Stir over low heat until the sugar has completely melted.  Attach a candy thermometer and raise the heat to medium and cook until the sugar syrup has reached 240ºF.

With the mixer running on high, carefully pour the sugar mixture down the side of the mixing bowl and into the egg whites.  Continue whisking until you get stiff white, shiny peaks. 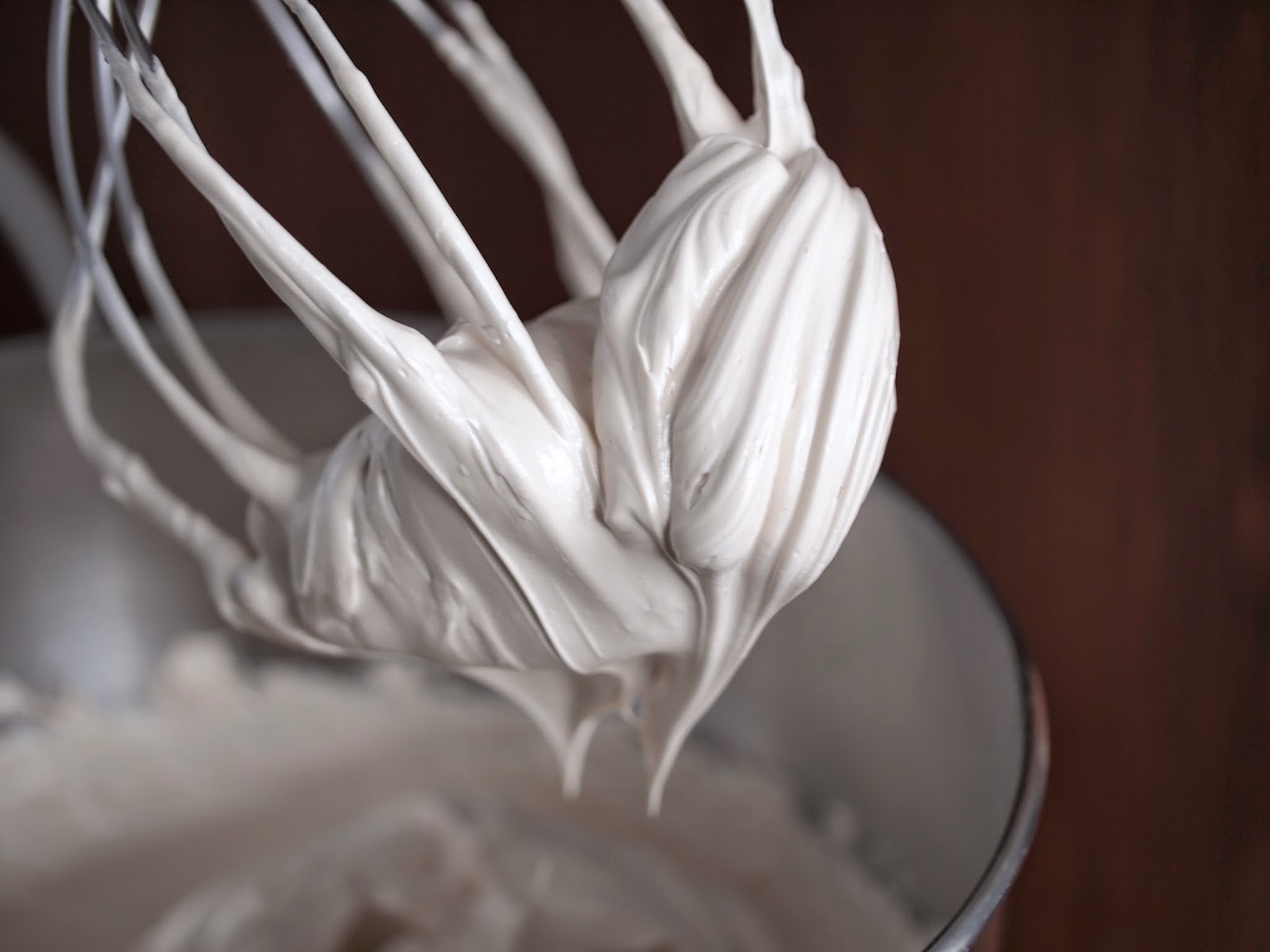 Stir another 1/4 cup water and 1/4 of the meringue mixture into the hazelnut flour mixture to create a paste.  Add the remaining meringue and carefully fold into the paste with a large rubber spatula until the mixture is the consistency of thick ketchup.  Do not over mix and don't stir vigorously.  Be gentle. 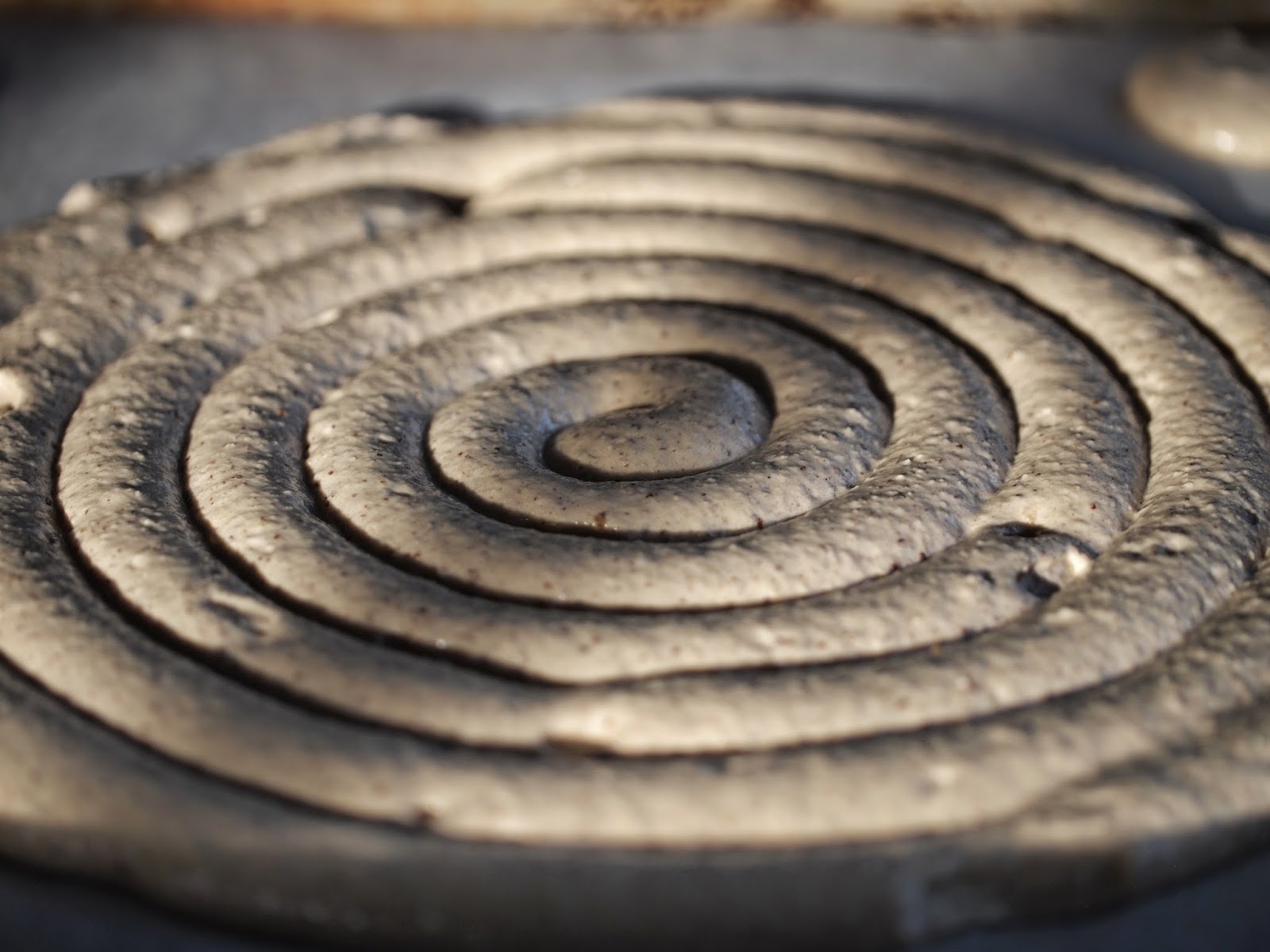 Transfer the meringue to the prepared pastry bag and pipe the meringue in a large spiral, just large enough to fill the 9" circle, by starting in the very center and piping tight circles to the edge of the outline.  Pipe the second circle.  Gently tap the sheet pans on a work surface a few times to release any air bubbles and allow to sit at room temperature for 20 minutes to form a "skin."  Preheat the oven to 300ºF.

If you have more hazelnut batter than you need for the 2 layers, pipe small quarter sized dollops on the third sheet pan for traditional macaron shells and bake for 10-14 minutes at 300ºF until the shells get "pied" and lose their wet sheen.

Bake the macaron layers in the middle of the oven for 10 minutes, turn the sheet pans 180º and then bake 10-12 minutes more or until the macaron are baked through but not hard (macaron have a slightly crisp exterior and that gives way to a soft interior.  They are NEVER crispy through and through).  Allow to cool completely.

German buttercream is simply a pastry cream (PC) with added butter, whisked into the PC to create a spreadable filling.

Combine the egg yolks, sugar, cornstarch and salt into the bowl of a stand mixer fitted with the whisk attachment.  Whisk until smooth.

In a large saucepan, combine the red currant jam, heavy cream and whole milk.  Bring to a simmer, stirring to allow the jam to melt a bit.

With the mixer running on medium speed, slowly add the hot cream/milk to the bowl by pouring it down the side and into the egg yolk mixture.  Add all the cream/milk and mix until combined.  Transfer the mixture back into the saucepan and whisk over medium/low heat CONSTANTLY until the mixture thickens to the consistency of mayonnaise.  Can take about 5 minutes.

Transfer the hot pastry cream into the CLEAN bowl of a stand mixer fitted with a CLEAN whisk attachment and mix until the mixture has cooled to room temperature (about 10 - 15 minutes). 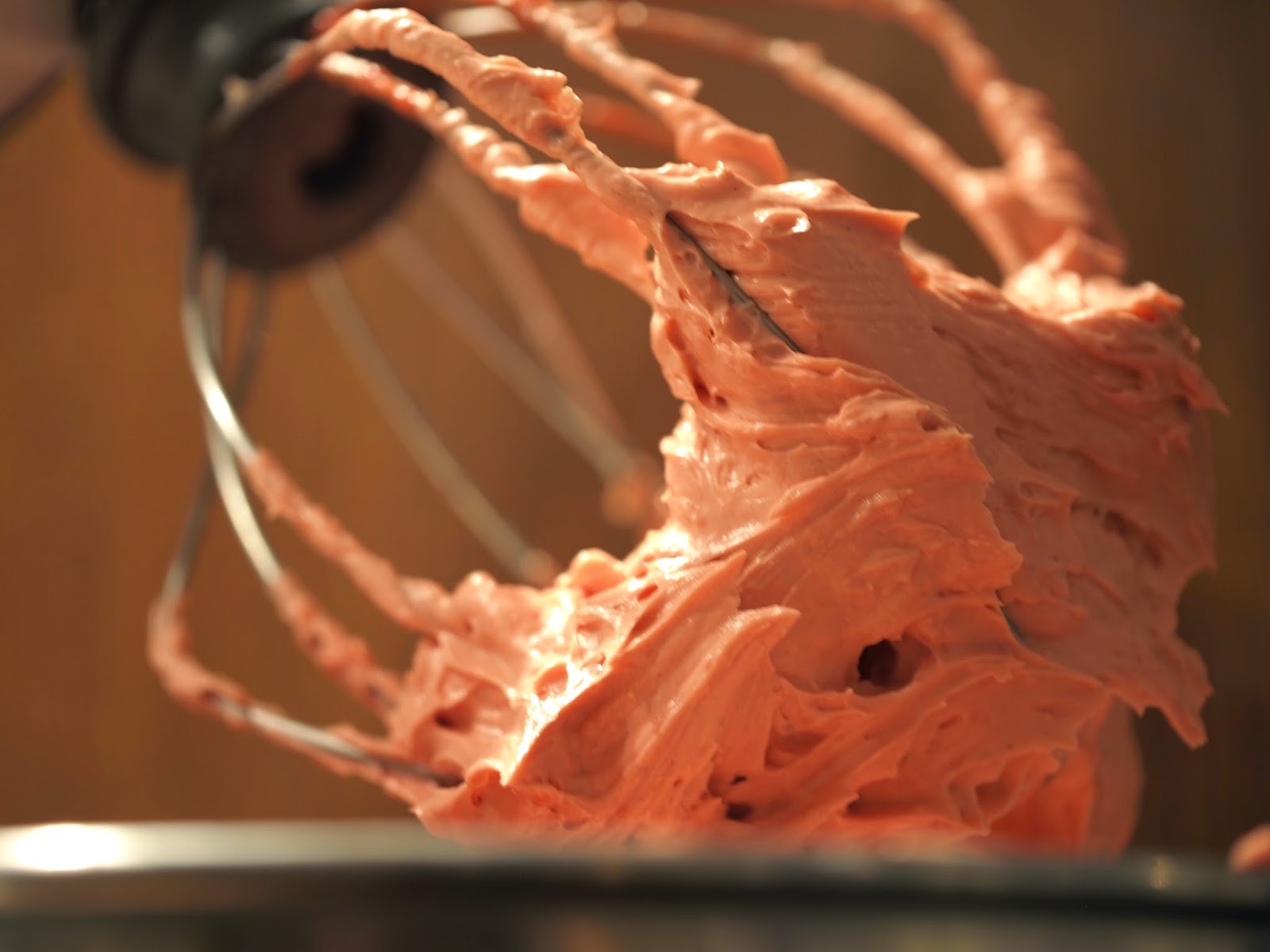 Add the butter, a few tablespoons at a time, and whisk between each addition.  Continue adding and whisking until the mixture thickens and smooths into a spreadable filling.  You may not need all 8 ounces of the butter.

Transfer the filling to a large pastry bag fitted with a large open tip.  Pipe dollops around the perimeter of the flat side of a macaron layer, and then continue piping inside the shell, continuing with a second layer of buttercream to create an inch thick filling. 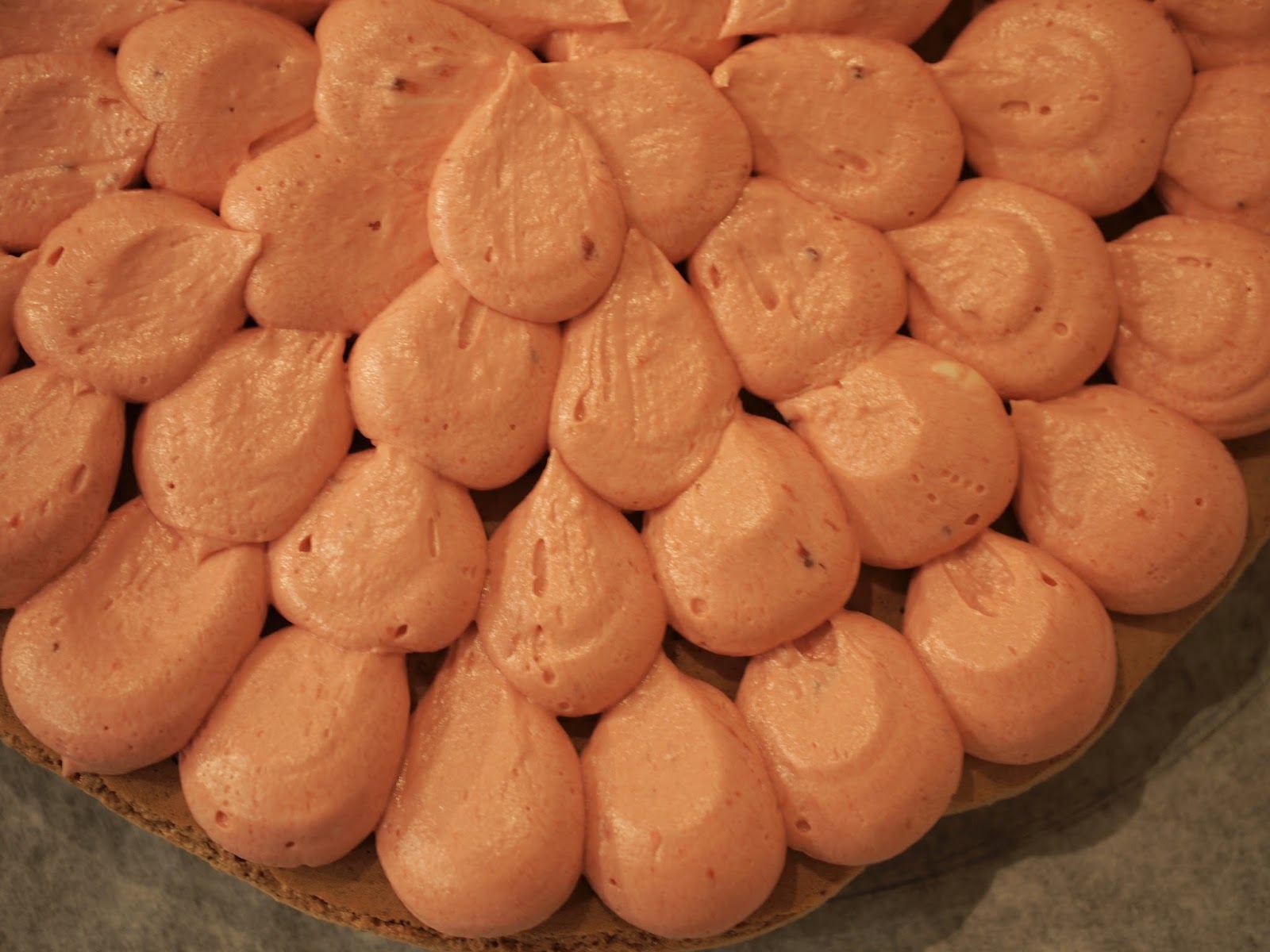 Top with the second macaron layer, spiral side up. Place in the freezer 20 minutes to set and then pipe decorative filagree at the edge of the top macaron if you like and add berries as desired (I had frozen red currants from my garden but red raspberries work just as well.).