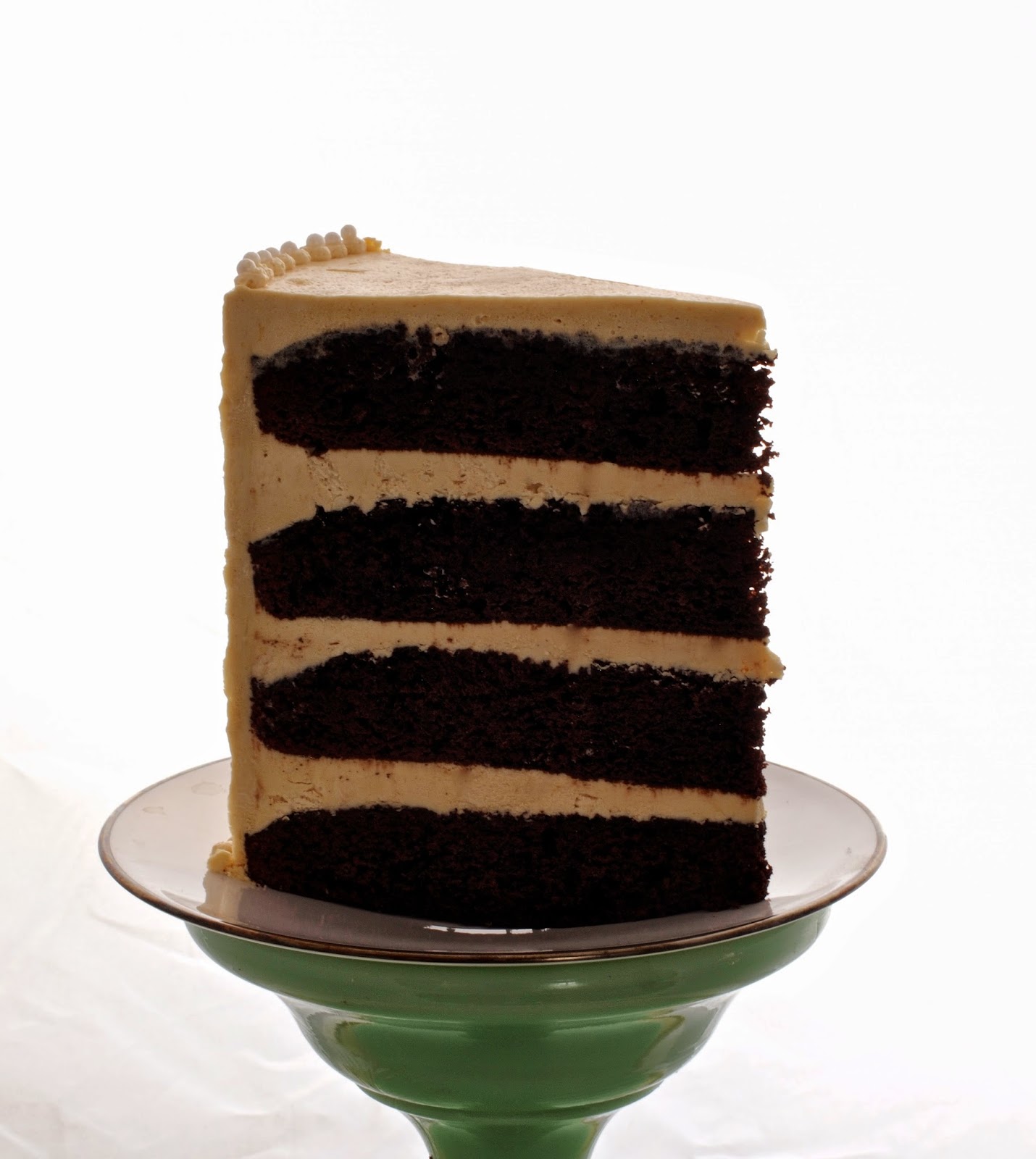 At my pastry shop, I'd roll out new pastries often.  One of my first offerings was a decadent, fudgy chocolate layer cake slathered in caramel buttercream.  We hadn't had the cake in the case more than 2 seconds when a customer remarked, "That's as beautiful and perky as one of Jackie O's pillbox hats." 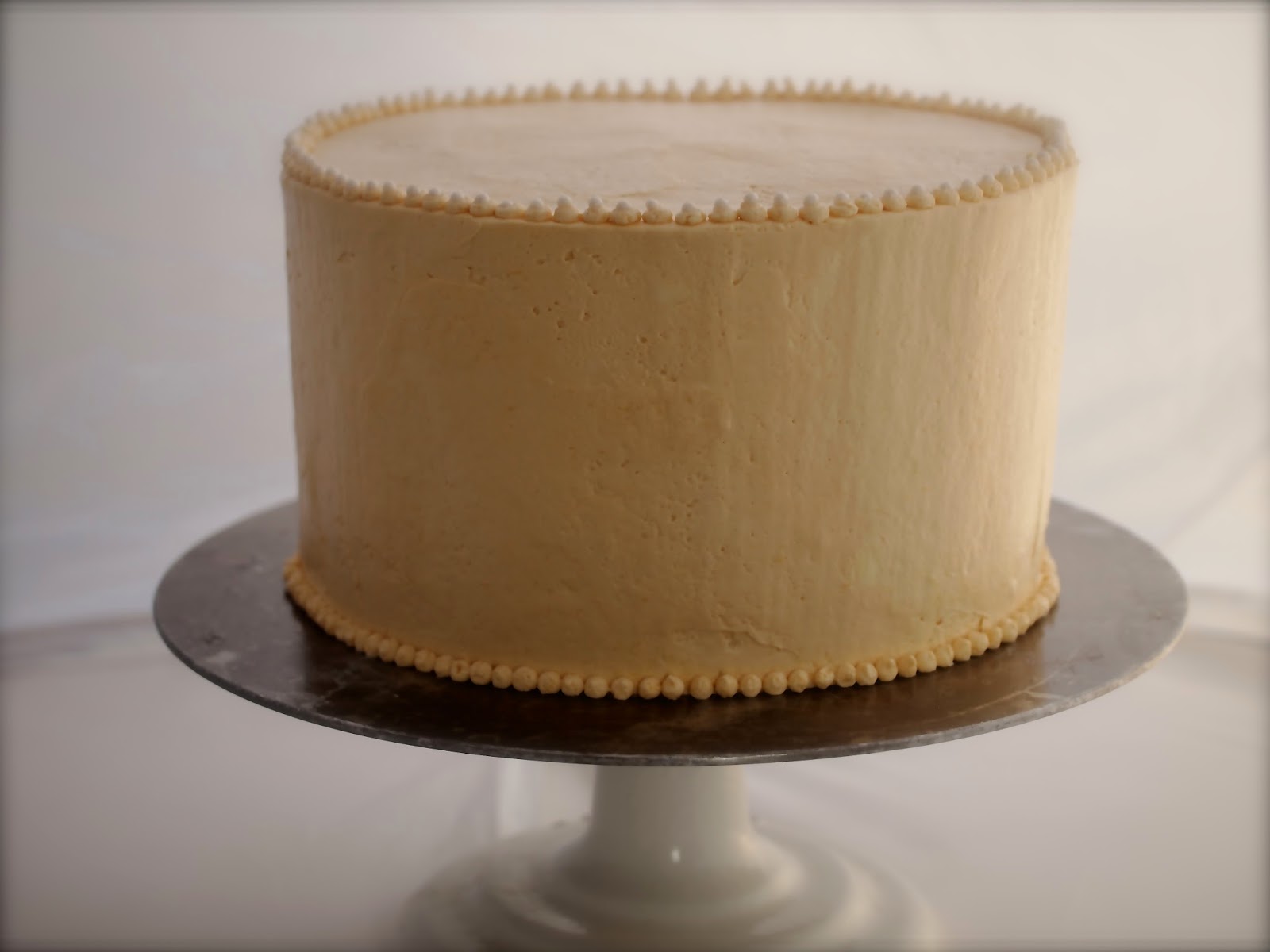 So it came to be that one of our most popular cakes was named the "Jackie-OH!"  It's elegant and understated with gorgeous hidden depths.  I'd say we landed on the perfect name, alright. 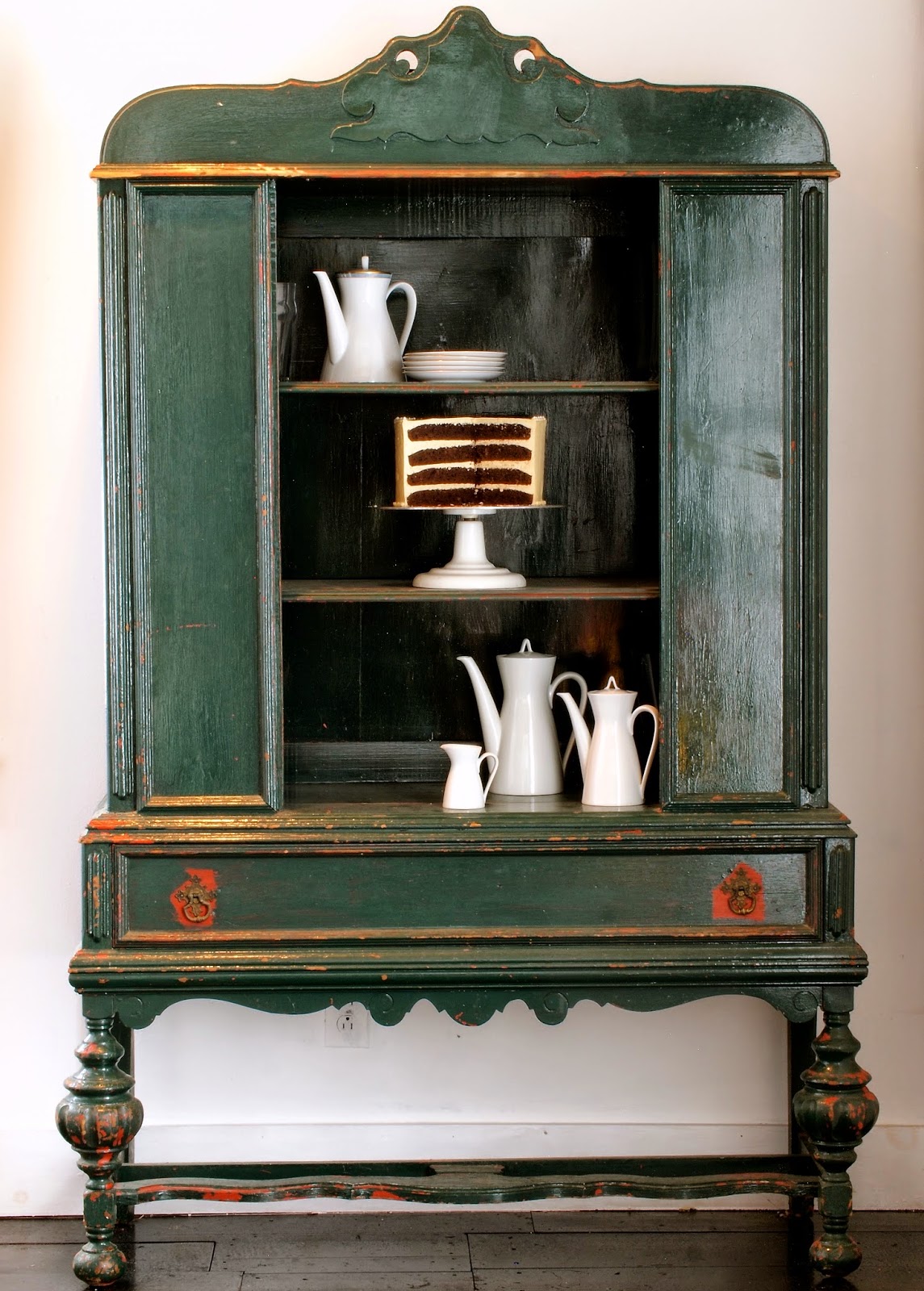 Line the bottom of four 9" cake pans with a round of parchment and spray with non-stick cooking spray.  Set aside.

Place the chopped chocolate in a heat proof bowl.  Pour the coffee over the chocolate to cover completely. Allow to sit undisturbed to melt.  Set aside.

In a large bowl, combine both flours, cocoa, baking powder, baking soda and salt.  Whisk at least 30 seconds to combine.

In the bowl of a stand mixer combine the sugar, eggs and oil.  Whisk on high until lightened and combined.

Divide the batter among the 4 pans evenly.  To get the batter perfectly divided, I weigh my mixing bowl before getting started and then weigh the batter filled mixing bowl once the batter is complete and subtract the weight of the bowl from the total.  What's left, you divide by four.  In my case, I ended up adding 16.75 ounces to each pan.

Bake for 25-30 minutes or until the cakes just spring back when gently poked.  Allow to cool completely.

For the Italian caramel buttercream


In the bowl of a stand mixer fitted with the whisk attachment, combine the egg whites, vanilla and salt.

In a heavy bottomed and large saucepan, combine the sugar, 1/2 cup water and the squirt of lemon juice.  Stir over low heat until the sugar has completely melted.  Stop stirring and raise the heat to medium-high.  Cook the sugar until it turns a medium deep amber.  Have 1/2 cup room temperature water on standby.

Once the sugar has turned the appropriate amber, take the caramel from the heat and CAREFULLY add the 1/2 cup of reserve water.  The mixture will spatter and bubble vigorously so be very careful in doing this.  The mixture will settle down quickly.  Once the carmel has stopped erupting, attach a candy thermometer to the side of the pan and stir over low heat to ensure any hardened bits of caramel melt.  Heat the mixture until the temperature reaches 234º-240ºF. 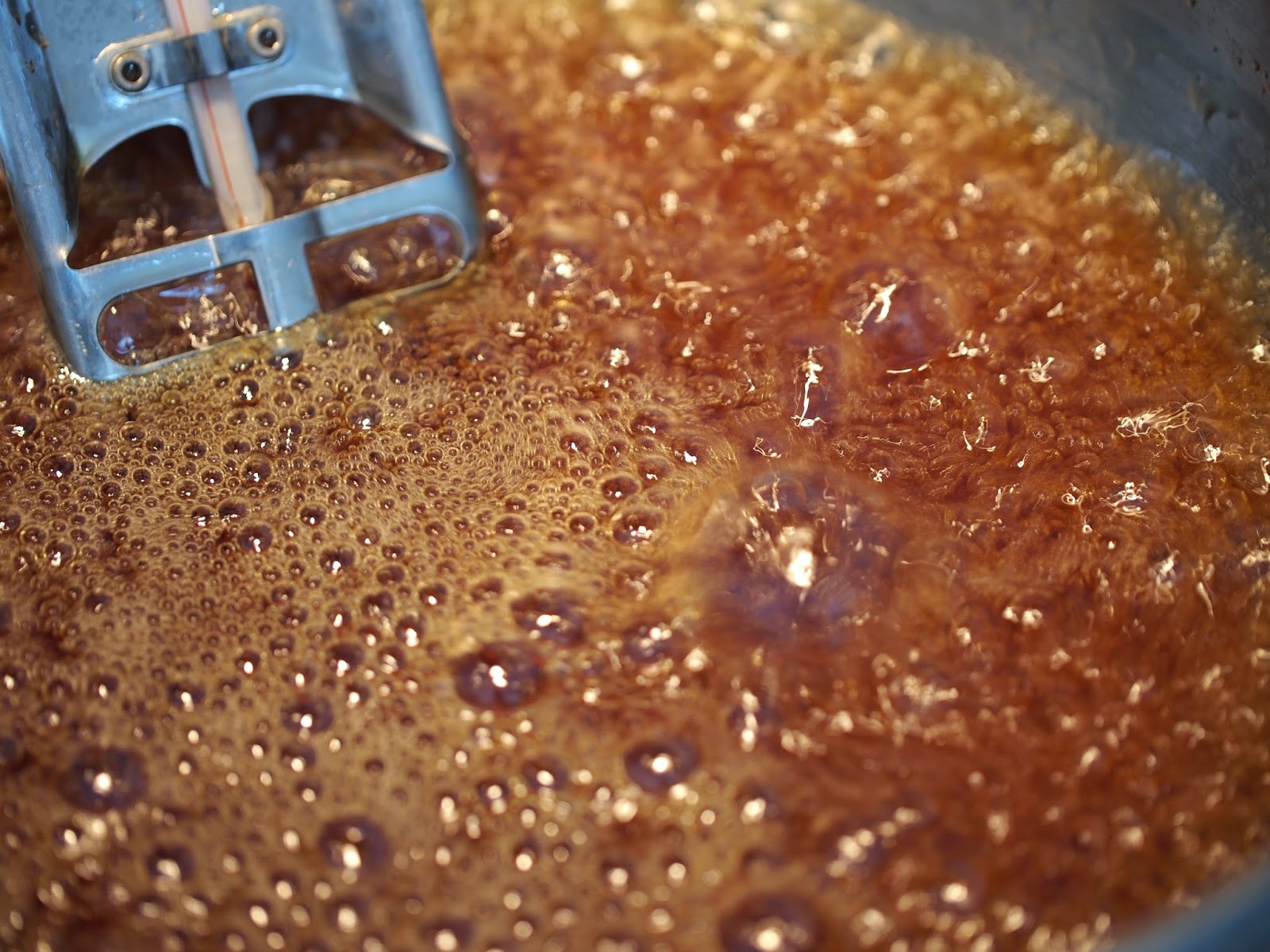 
Add the butter, a few tablespoons at a time, with the mixer running on medium speed.  Allow each addition to incorporate until adding more.  The meringue will deflate at first and start to look more "liquidy."  This is normal.  It will often then start to look broken or curdled.  This is also right on the money.  At this point, add a few more tablespoons of butter and mix on high until the buttercream thickens and smooths out. 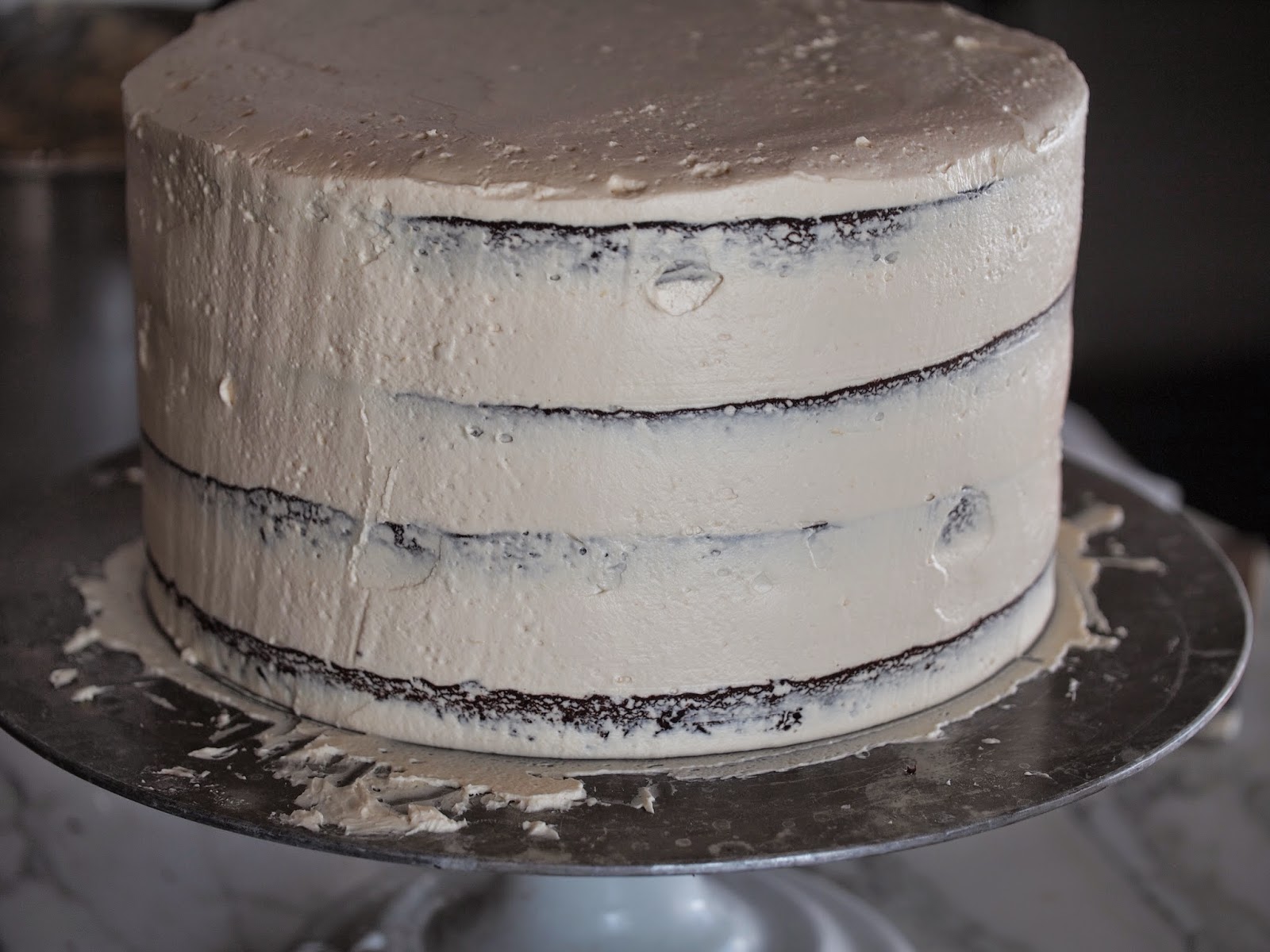