SCHOKOLADE WINDBEUTELTORTE aka Chocolate Windbag Cake! A recipe that isn't a recipe. 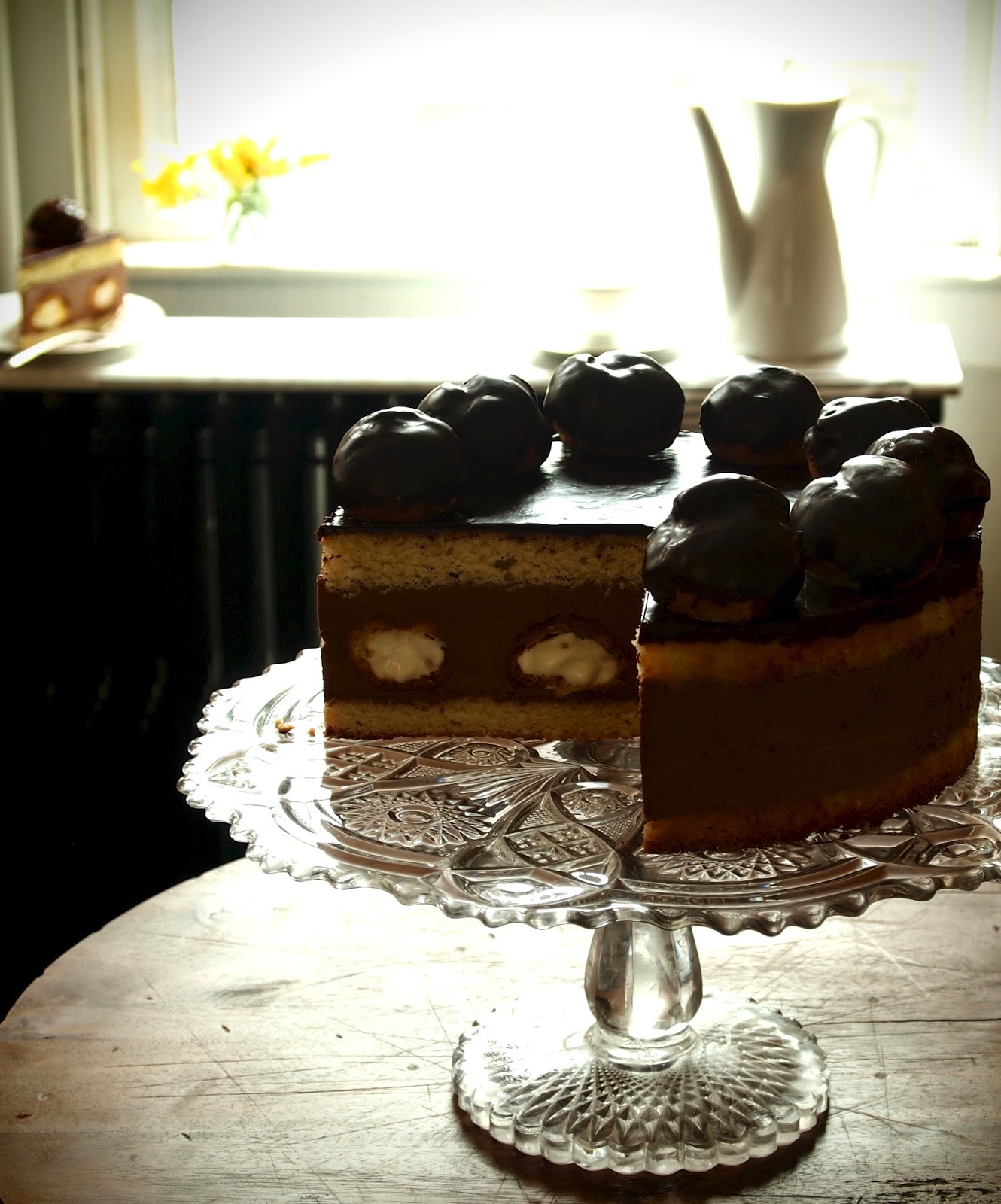 My friend Nancy said her husband had just returned from Germany and brought home with him the memory of a cake and would I happen to have a recipe for this delectable remembrance?  This, to my mind, is proof of a successful trip, with cake in your heart. 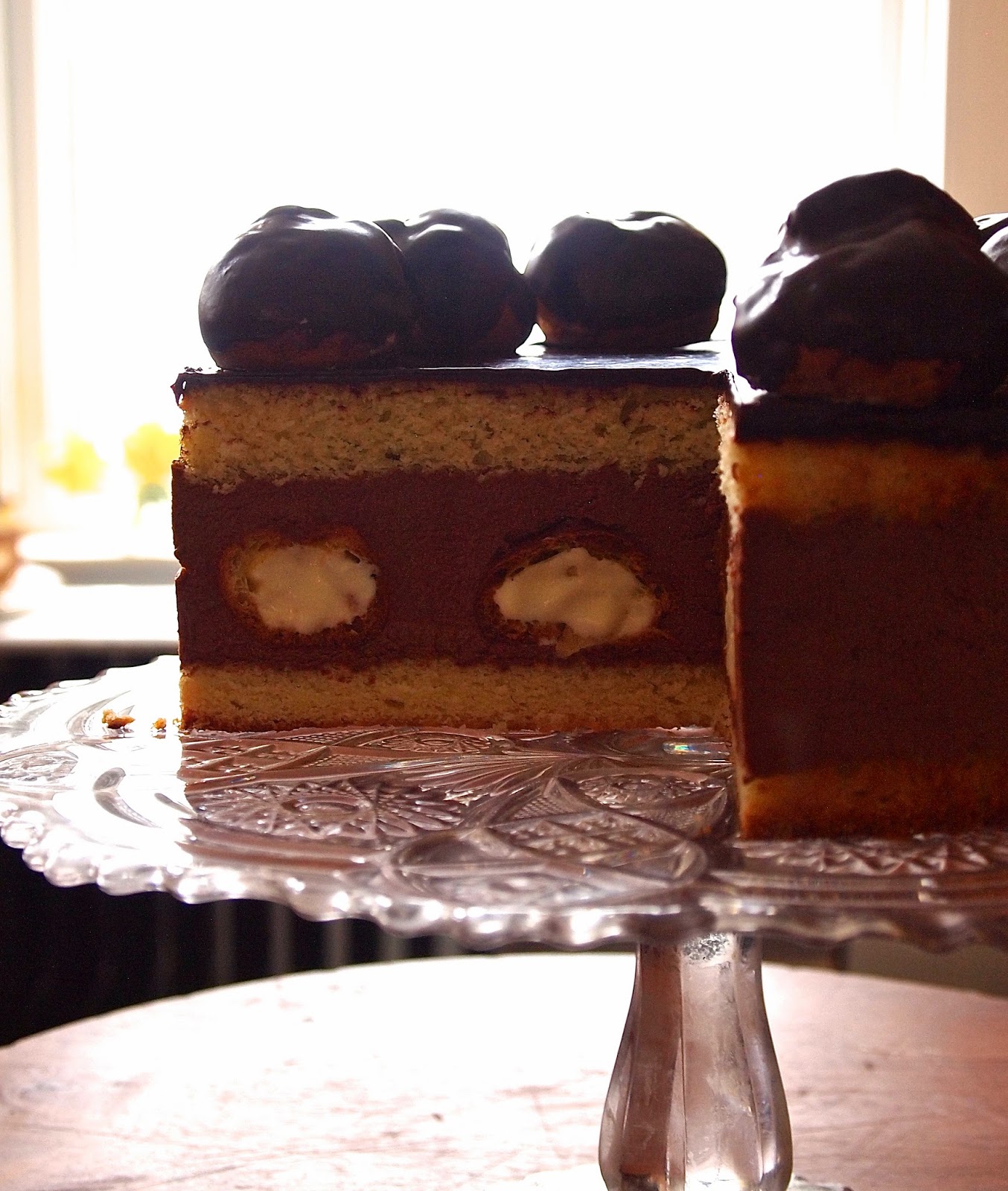 I was tickled when she told me the name of the cake:  Windbeuteltorte.  Literally translated: Windbag cake.  You see, the word for cream puff in German, Windbeutel, means windbag.  And yes, they also use the word to describe humans as windbags. 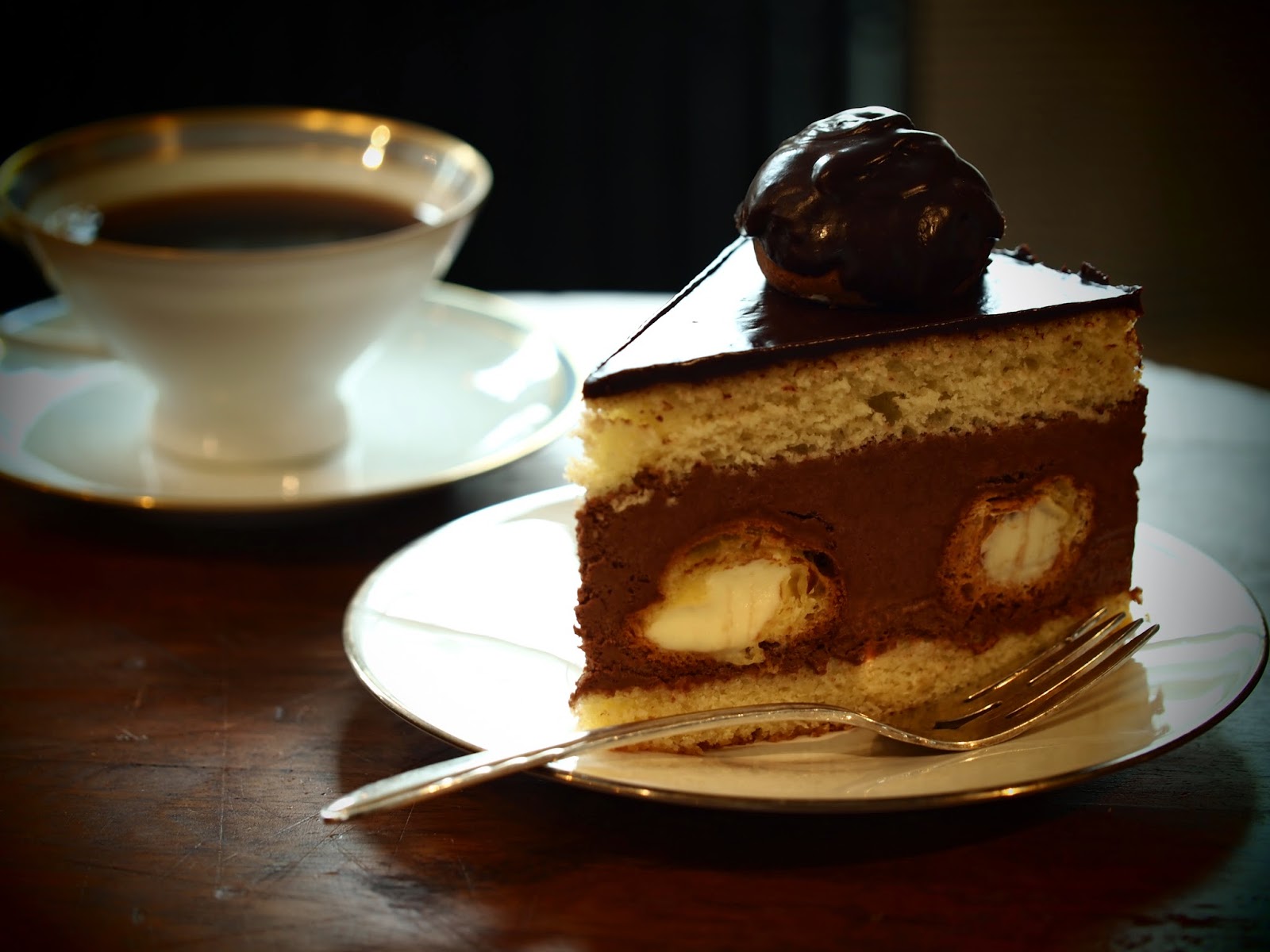 But this version that my friend's husband remembered so well was chocolate.  He even took a picture.  The version he tried didn't have a deckel or a lid, just a mousse covering the cream puffs and drizzled chocolate on top.  It didn't have berries either, which is how it's sometimes done, even in the chocolate version.  I was down with just straight chocolate, however, I like a lid on the cake proceedings and is how I grew up eating the cake.  A cake lid keeps everything neat and acts as the perfect landing strip for a decent layer of more chocolate while also acting as a flat stage for more windbags.

If you're following what I'm saying, there are no rules in making a windbag cake other than you've got to bury windbags in a mousse-like cake.  And even then, you can have your way with the filling.  Some make a proper mousse, vanilla or chocolate (and hell, why not something fruity?).  Some just use sweetened cream.  Some folks break open a pudding packet and doctor it with extra whipped cream.

You can make it as simply or as elaborately as you see fit.  Just don't forget the windbags!

Following is the list of elements I used to make up my particular version of this wonderful treat.

(1)  For the cake:  I used the cake recipe I used for my Boston Cream Pie hearts but baked it in a 9" springform, let it cool and cut it in half.  The baking time will differ.  This took 30-35 minutes to bake through.  Find the recipe HERE.

(2)  I used the pastry cream recipe from the same recipe for the filling of the cream puffs AND as the base of the mousse.  Here's how I doctored both:

(a)  For the cream puff filling:  I whisked 1 cup of heavy cream to stiff peaks and folded it into the pastry cream.  I used HALF of this mixture to fill the choux puffs (here's the link to the recipe again).  Once filled (I poked a hole in the bottom of each, fit a large pastry bag with a smallish open tip and filled away).

(b)  For the mousse, I kept the remaining half of lightened pastry cream on standby in the fridge.  In the meantime, I chopped 8 ounces of bittersweet chocolate and placed in the bowl of a stand mixer fitted with the whisk attachment.  I brought 1/2 cup of heavy cream to a light simmer and then poured the cream over the chocolate and allowed to sit for a minute to melt the chocolate.  I started the mixer up and added 1/2 cup more heavy cream as the mixture whisked.  As the mixture lightened and whipped up, I added the reserve pastry cream and continued whisking until the mixture reached a mousse like consistency. 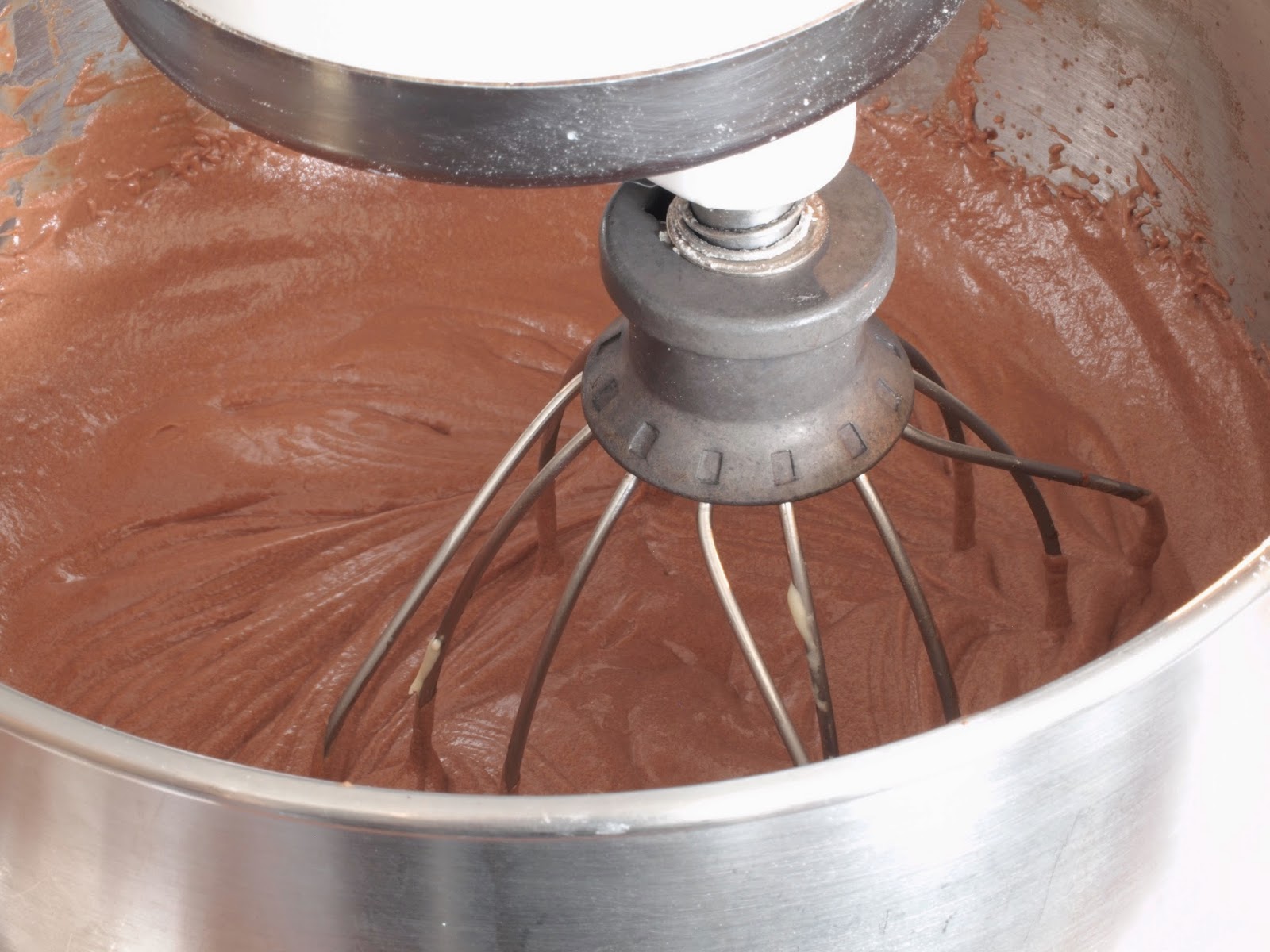 (3)  For the cream puff shells (the choux) I halved the recipe for choux that you can find HERE and piped them a little smaller than 1/2 dollar sized dollops, and baked for about 40 minutes or until they were deeply golden brown.  You'll get about 22 puffs for filling.

(4)  To assemble the cake, I placed half of the cake on the bottom of the springform. 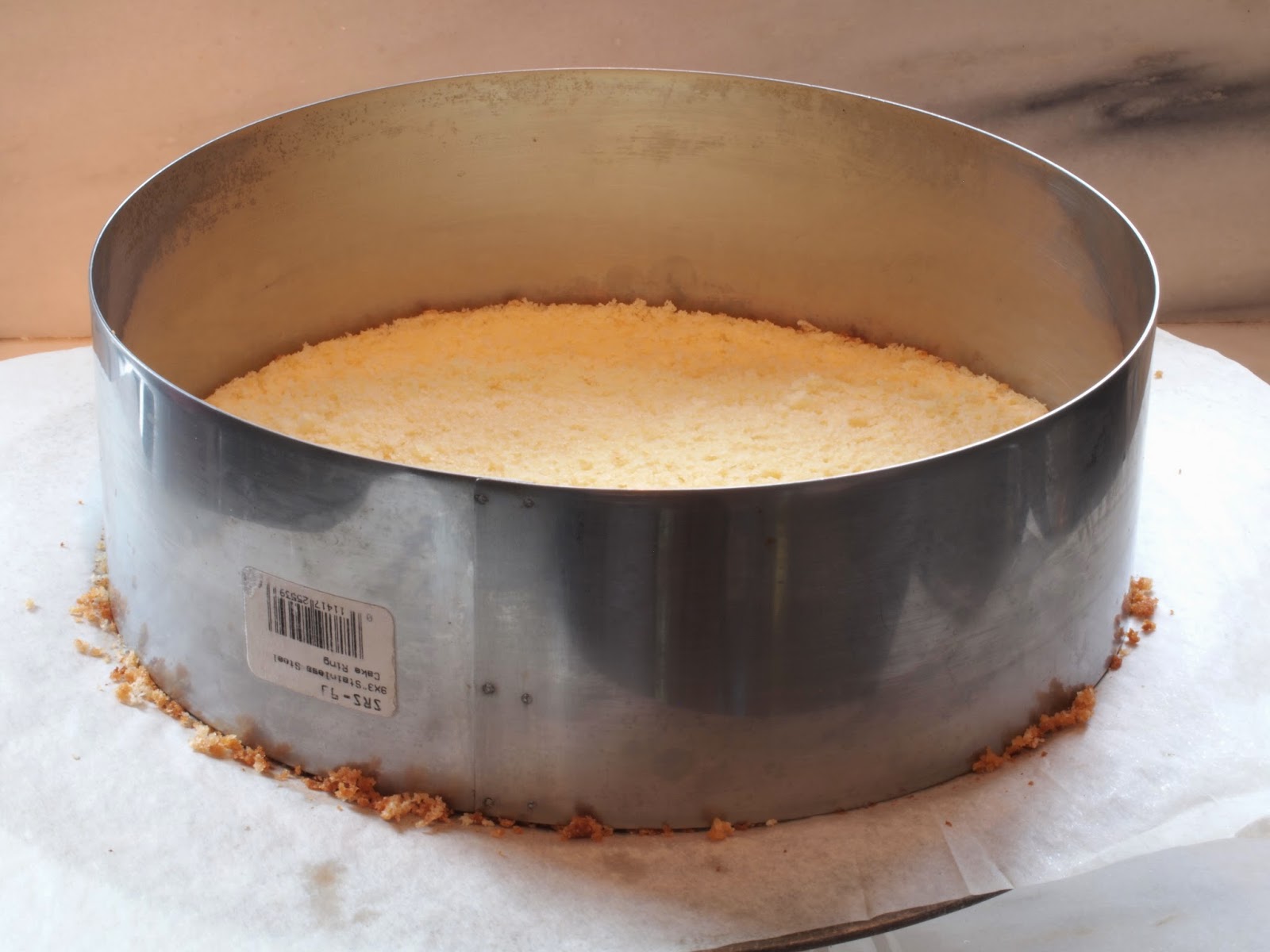 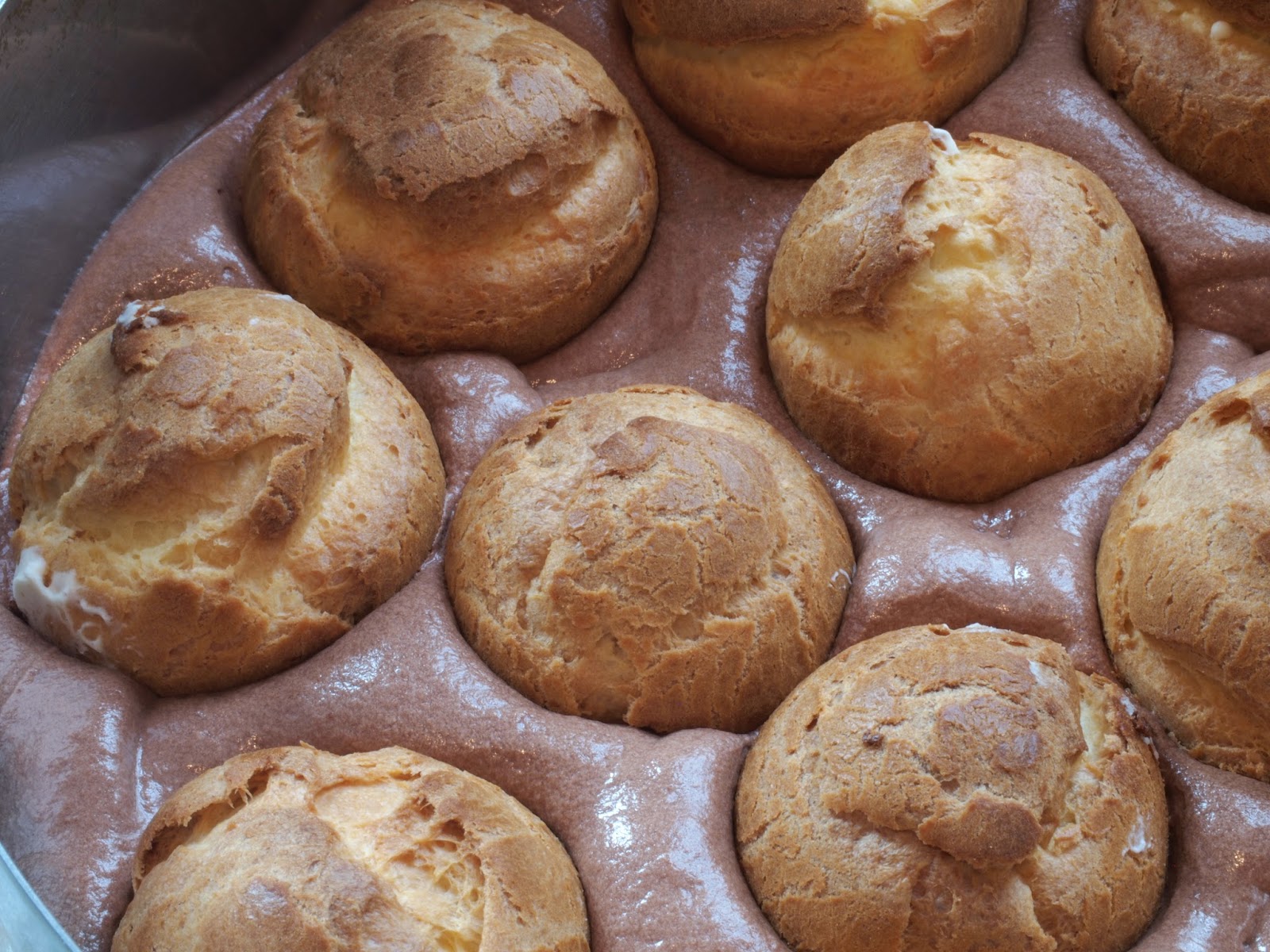 I put the other half of the cake on top of the mousse and placed everything in the freezer to set for about an hour. 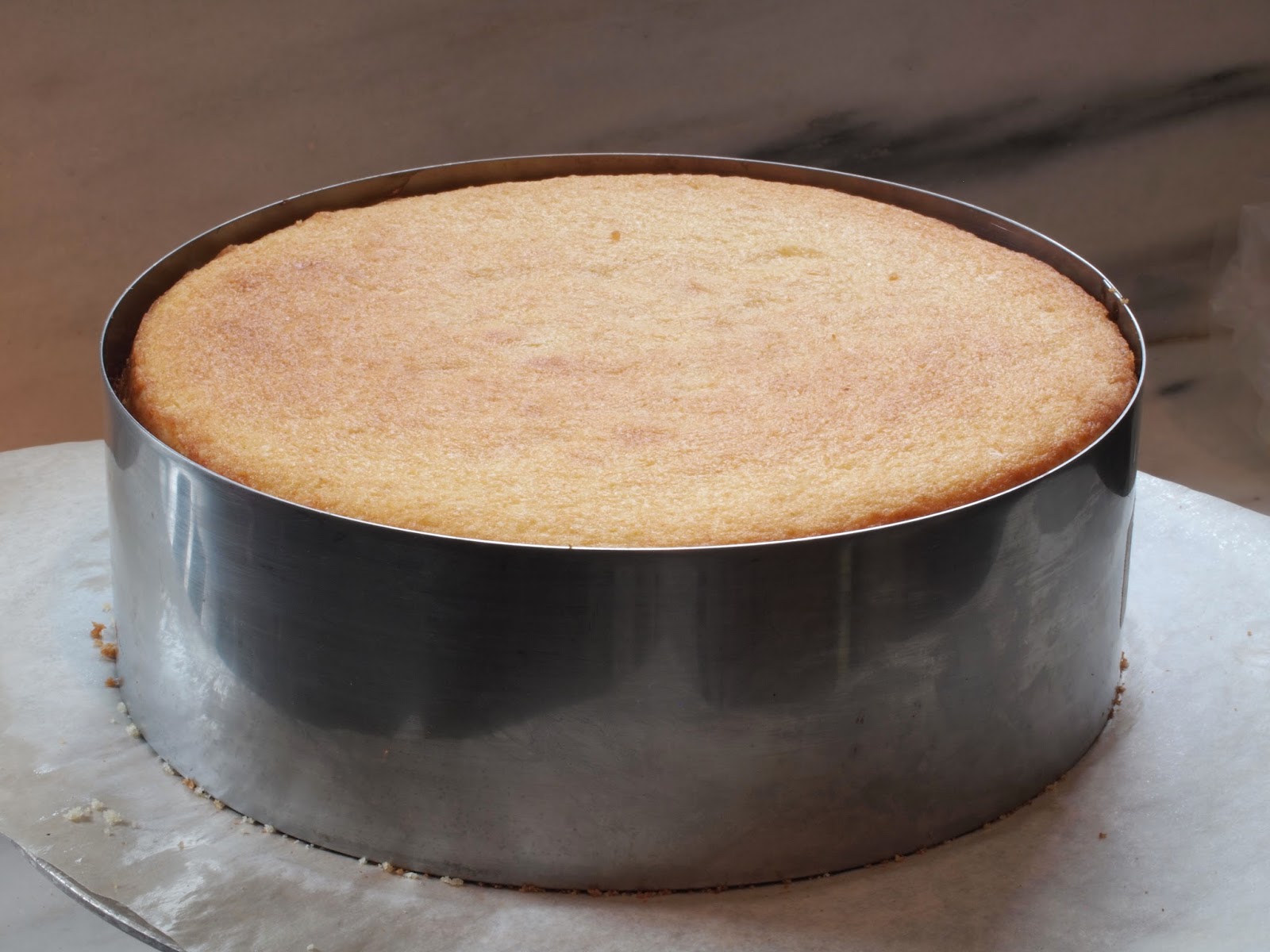 (5)  To finish, I made up a batch of ganache by finely chopping 6 ounces of bittersweet chocolate and placing it in a heatproof bowl.  I brought 1/2 a cup of heavy cream to a light simmer and poured the cream over the chocolate and added 1 tablespoon of unsalted butter (room temperature) and 1 tablespoon corn syrup (optional).  I allowed the mixture to rest, allowing the chocolate to melt, and whisked the mixture until it was smooth.  I dipped the tops of my remaining cream puffs into the chocolate and set them aside to set in the fridge.  I then spread the rest of the ganache on top of the cake, with the springform (or cake ring) still in place and then refrigerated the cake until the ganache was set.  Remove the cake from the form.  Place the set, chocolate covered cream puffs on top of the cake and serve to your favorite sweet loving windbags...or cream puffs.