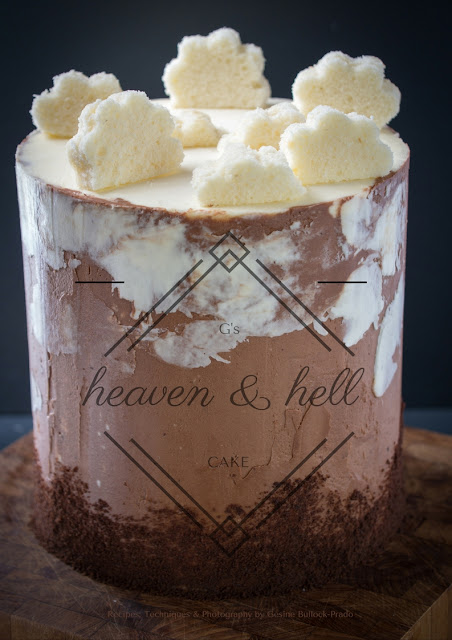 I appreciate an impossibly tall cake. They happen to be in fashion now too. The official term is: Barrel Cake. But I liked tall cakes before they were cool or had a trendy moniker. As a matter of fact, I can't remember when I didn't like tall cakes because it means you get more cake. 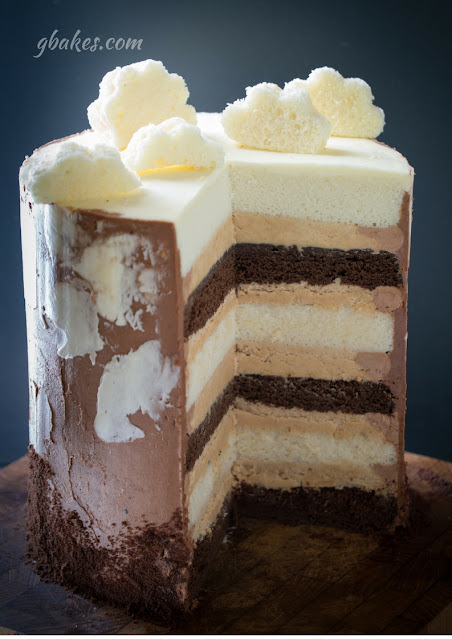 It occurred to me that a favorite standard, the Heaven and Hell Cake, could stand for the tall treatment because it only seems right that the distance between the two should be realllllly far apart, hence a tall cake.

If you aren't familiar, a Heaven and Hell Cake is layers of Devil's Food and Angel Food cake, sandwiched by peanut butter mousse. I like to work with a white cake that has a bit more structure than an angel food but that still has a lovely amount of moisture and delicacy to make the framework sound, so instead I make a white cake that utilizes the "paste method" wherein you start with all the dry ingredients in the bowl, add softened butter to create a sandy like texture and then you add the liquids. The result is a cake with lots of flavor and structure but still manages to be fine grained. In short, it's heavenly.

Preheat the oven to 350ºF. Spray two 8" cake pans with non-stick cooking spray and line the bottoms with rounds of parchment. Set aside.In the bowl of a stand mixer fitted with the paddle attachment, combine the flour, sugar, baking powder and salt. Whisk for 30 seconds to distribute the leavening.Cut the butter into tablespoon pieces and place on top of the dry ingredients. Mix on low until the flour/butter mixture looks like wet sand and there are no dry streaks remaining.In a small pitcher, stir together the milk, egg whites, and vanilla. Add half the mixture with the mixer on low and once relatively combined, mix on high for 1 1/2 minutes. Scrape down the bottom and sides of the bowl. Add the remaining egg white/milk and mix for 1 minute on high.Divide the batter among the 2 prepared cake pans and bake for 25 - 30 minutes on the middle rack of the oven or until the cakes spring back when gently poked. Allow the cakes to rest 10 minutes in the pan and then run a paring knife along the edge of the cake pan to release the cakes. Turn them over onto a cooling rack and allow to cool completely.Once cool wrap loosely in plastic wrap and freeze for 1 hour. Trim any doming on the top of the cake and then torte each layer evenly in half (aka, cut them in half) with a long serrate knife. Set aside.For the Devil's Food6 ounces unsalted butter, room temperature12 ounces granulated sugar1 teaspoon salt9 ounces unbleached cake flour3 ounces Dutched cocoa2 teaspoons baking powder4 large eggs, room temperature12 ounces whole milk, room temperature1 tablespoon vanilla extract

Preheat oven to 350ºF. Spray two 8" cake pans with non-stick cooking spray and line the bottoms with rounds of parchment. Set aside.In the bowl of a stand mixer fitted with the paddle attachment, combine the butter and sugar and beat on high until the mixture is light and fluffy, about 4 minutes.In a small bowl, whisk together the flour, cocoa, baking powder, and salt for 30 seconds to distribute the leavening.With the mixer on low, add the eggs, one at a time, mixing until each is incorporated and scraping the sides and bottom of the bowl between each addition.Add the vanilla and mix to combine.Add 1/3 of the flour mixture with the mixer on low and then 1/2 of the milk, then another 1/3 of the flour mixture, then the rest of the milk and then the rest of the flour mixture. Scrape the sides and bottom of the bowl every once in a while to make sure everything's incorporated. Divide the mixture evenly among the two prepared pans and bake for 30 - 35 minutes or until a toothpick comes out clean. Allow the cake to rest 10 minutes in the pan and then run a paring knife along the edge of the pan to release. Turn out onto a cooling rack and allow to cool completely. Once cool, wrap loosely in plastic wrap and freeze for 1 hour. Trim any doming on the top of the cake and then torte each layer evenly in half (aka, cut them in half) with a long serrate knife. Set aside.For the peanut butter mousseOne 8 ounce package of Philadelphia cream cheese, room temperature2 cups smooth peanut butter1 1/2 cups confectioner's sugar3/4 cup heavy cream1 teaspoon vanillaCombine all ingredients in the bowl of a stand mixer fitted with the whisk attachment.  Whisk on low until the confectioner's sugar is somewhat distributed and then mix on high until smooth.

In a heavy saucepan, combine the sugar, water, salt and lemon juice. Stir over low heat until the sugar has completely melted. Using a damp pastry brush, wipe down any sugar crystals back into the mix, clip on a sugar thermometer and raise heat to medium-high. Heat the sugar syrup to 240º - 245ºF.

While the sugar is heating, add the egg whites to the CLEAN bowl of a stand mixer and using a whisk attachment, whisk until the egg whites are foamy. Stream the hot sugar syrup down the side of the bowl with the mixer running and then mix on high until the bowl is cool to the touch and the meringue is shiny white and reaches stiff peak stage.

Add the butter, a few tablespoons at a time, and continue adding the butter until the buttercream tightens, smooths out and becomes spreadable. Again, you may not need all the butter and you'll know when you're getting close when the mixture looks as if it's breaking or curdling. It doesn't always do this but if it does, that's perfectly normal and a sign that you're getting close. Add a few more knobs of butter and let the mixer do the work. Once the buttercream comes together, take out 350g of plain buttercream and set aside. Stream in the melted chocolate into the remaining buttercream and mix until combined.

Take a layer from both the Almost an Angel cake and devil's food that is the least perfect. Using a 2" flower cookie cutter, stamp out flower shapes from the Angel layer and then cut in half to make clouds. Wrap the clouds in plastic wrap and set aside.

Break the set aside devil's food layer into small pieces and place on a parchment lined sheet pan. Bake the devil's food pieces in a low oven, about 200ºF, until the pieces have dried out completely. Allow to cool and then pulverize in a food processor. Set aside.

Place a Devil's Food layer on an 8" cake round. Fill a large pastry bag fitted with a large open tip ( I used an 808 Ateco tube) with 425g of chocolate buttercream, set the remaining buttercream aside for finishing the sides. Pipe a perimeter of buttercream on the outside edge of the cake and then spread 1/5 of the peanut butter mousse (about 300g) inside the buttercream dam. 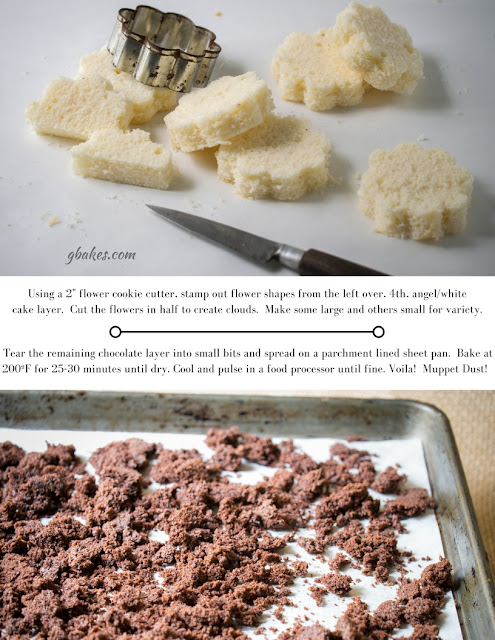 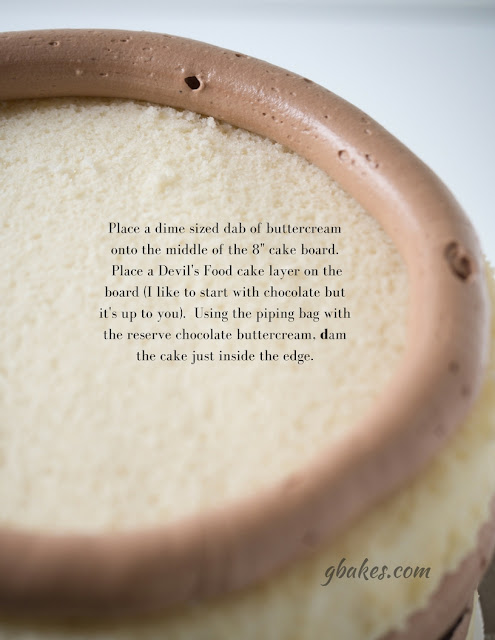 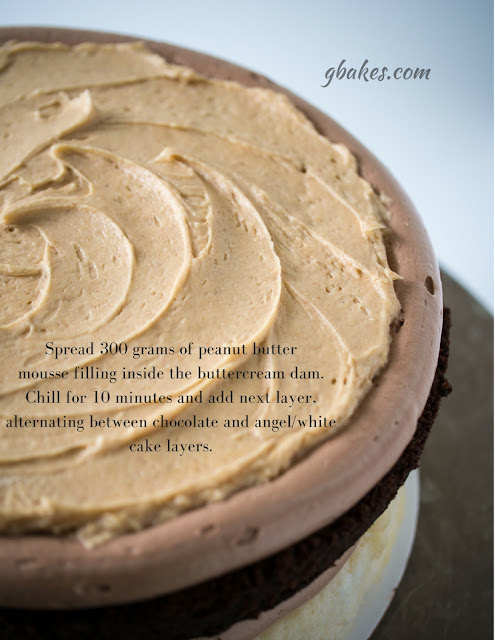 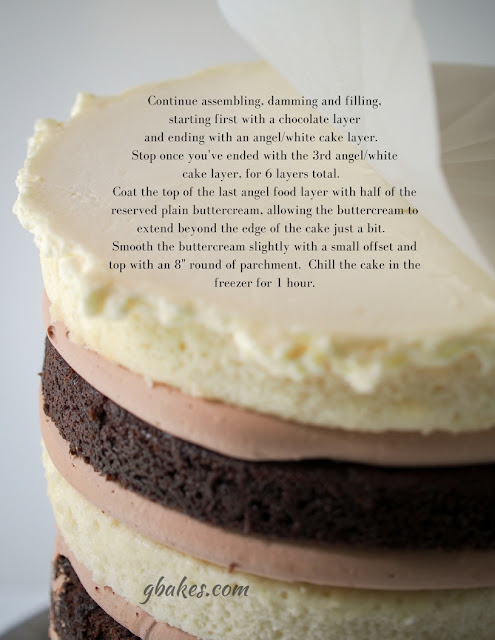 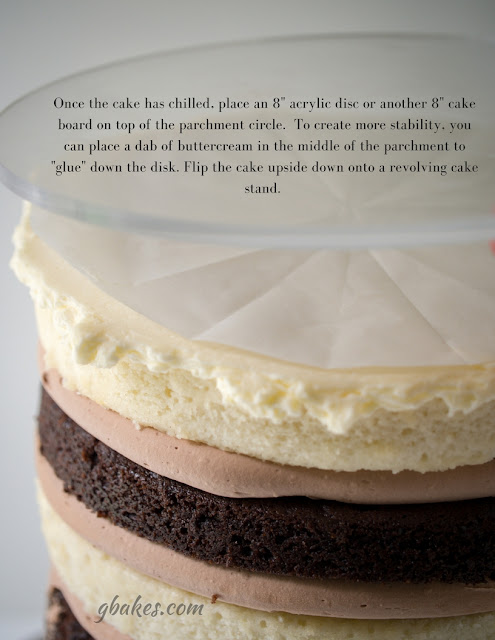 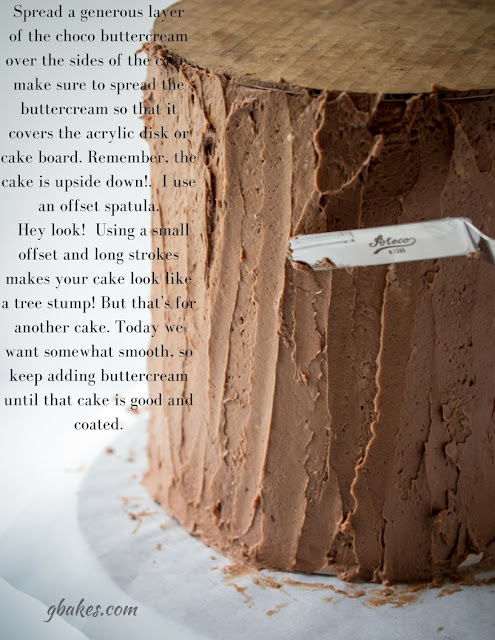 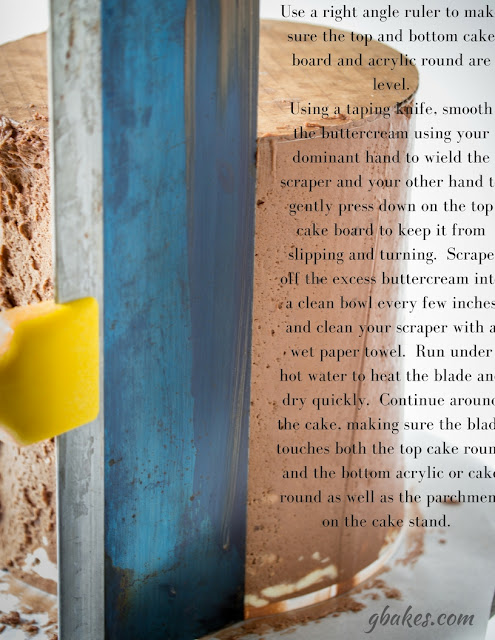 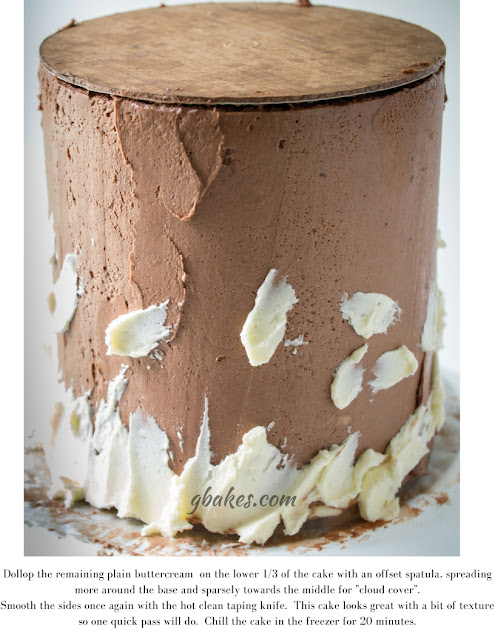 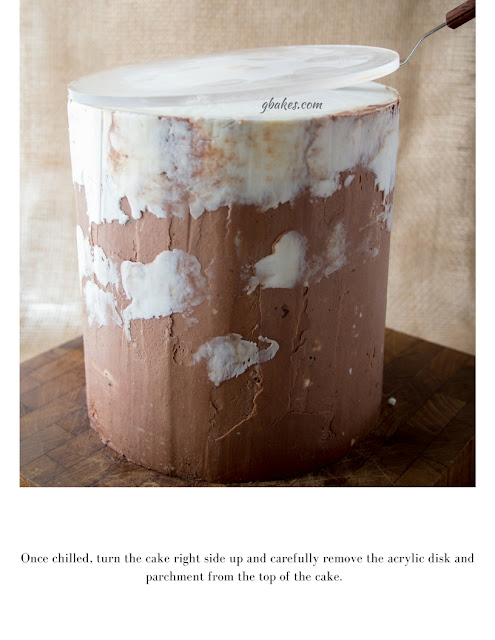 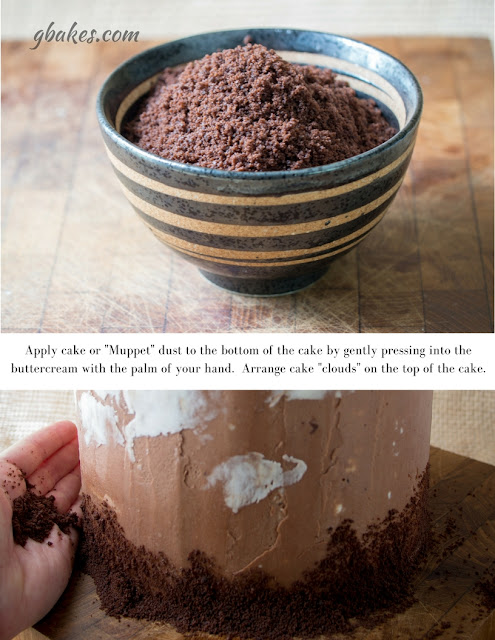